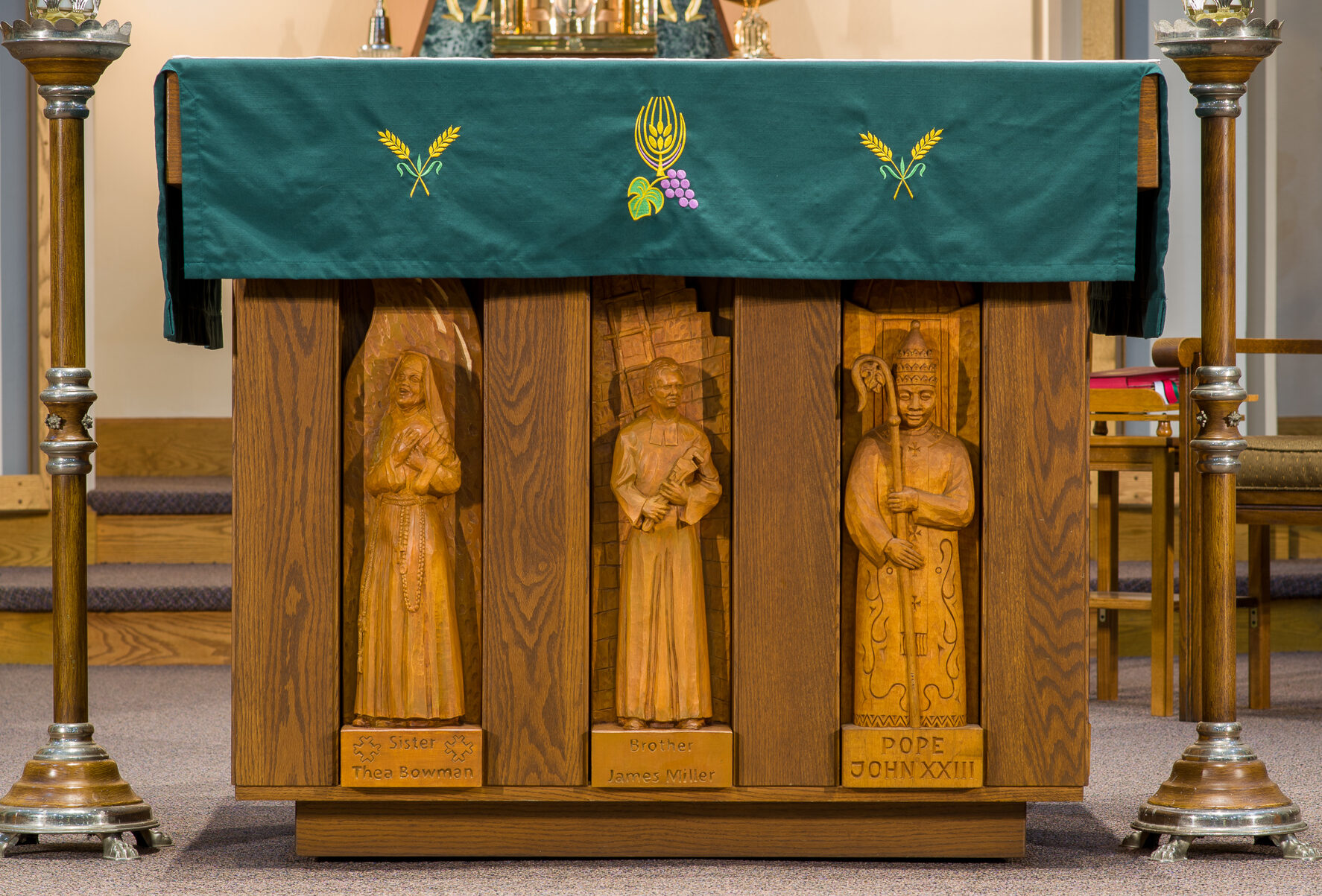 Reflection is useful. It is a versatile expression because of its multiple meanings. The one that may come immediately to mind involves a mirror. However, in the context of this story, the relevant meaning is concerned with focused thinking about oneself and one’s relationship with others. Reflecting on the lives of Blessed Brother James Miller and Servant of God Sister Thea Bowman can help us deepen our understanding of our inner self, perspectives, attitudes, experiences and interactions with others and God. In doing so, it may help us gain insight on how to virtuously move forward along the path of life.

Brother James Miller and Sister Thea Bowman were both active in the Diocese of La Crosse during the latter half of the 20th century. Blessed Miller, a brother of the De La Salle Christian Brothers religious order and Sister Thea, a member of the Franciscan Sisters of Perpetual Adoration, although from different backgrounds, had a significant trait in common: They were both champions of social justice.

Sister Thea was an “old folks’ child,” referring to herself as being born to middle-aged parents in Yazoo City, Miss. She was the only child of Dr. Theon Bowman, a medical doctor, and Mary Ester Bowman, a teacher. Her grandfather was a slave before Lincoln’s Emancipation Proclamation was issued in 1863.

Although her parents were Methodist, Sister Thea attended a Catholic school, the Holy Child Jesus Church, in Canton, Miss., where the Franciscan Sisters of Perpetual Adoration (FSPA) were her teachers and the pastor was a member of the Missionary Servants of the Most Holy Trinity. They were known for their missionary work with the poor by supporting parish ministry and for promoting social justice. It is in this atmosphere that inspired Sister Thea, at the tender age of 12, to join the Catholic Church, with her parents’ approval.

Blessed Brother Miller was chosen because of his close ties to the area and Sister Thea because Father Lyle had a particular fondness for her.” – Ellen Miskowski

Motivated by the example of the members of these two religious communities, Sister Thea, at age 15, decided to give up the familiarity of her hometown to join the FSPA in La Crosse, where she would be the first African-American member of her religious community. She attended and graduated from Viterbo University and went on to earn master’s and doctorate degrees from The Catholic University of America (CUA) in Washington, D.C. Her love and devotion to education led her, at first, to teach at Blessed Sacrament Grade School in La Crosse and then, following her university degrees, to teach at CUA, Viterbo and Xavier universities. While at Viterbo, Sister Thea chaired the English Department.

In a tribute to Sister Thea, Faith ND, a publication of the University of Notre Dame Alumni Association, wrote, “Sister Thea, as she became known as, worked diligently not only at education but on evangelization of Black American Catholics. The Church in the South had been wounded by the history of segregation and slavery. The social structures of sin prevented the marginalized populations from feeling welcome in the Church that they saw as a Church of white people. Sister Thea worked to create a hymnal that showcased Black spirituality and culture. She traveled across the American continent and even abroad to the Caribbean Islands and Africa to spread a ministry of joy—a ministry of proclaiming the joy of each culture’s unique differences yet their unity in Christ.”

Sister Thea died on March 30, 1990, at age 52, after a six-year battle with breast cancer. Despite the trials and tribulations in her life, especially after her diagnosis, she is quoted as vowing to “live until I die.” A few weeks before dying, she said, “We unite ourselves with Christ’s redemptive work when we reconcile, when we make peace, when we share the good news that God is in our lives, when we reflect to our brothers and sisters God’s healing, God’s forgiveness, God’s unconditional love.”

Sally Nash, a St. Joseph parishioner, offers her personal reflection of Sister Thea: “It was a long time ago that I was her student, but we both shared a passion for the study of and reading of William Faulkner’s writings. She was a great teacher in that regard. The biggest and lasting impression I have of Sister Thea is her absolute joy in her love for Christ Jesus. I believe because of this it made her a great teacher of difficult subjects and times. She was teaching and living life as a role model of diversity way back then and was fearless because of her love of Jesus. Her joy would resonate in the classroom, as well as in the hallways, not only when she would sing, but just when she was there for you (and I mean her focus was on you). When Sister Thea burst into song, everyone in all the classrooms knew that it was Sister Thea. We all heard her love of Christ and joy in that moment. I had no idea how blessed I was to have her as a teacher and guide.”

Sister Thea is officially being considered for sainthood. She is now designated a Servant of God, the first step of five in being named a saint.

Blessed Brother James Miller grew up on a farm in central Wisconsin, not far from Stevens Point. After attending grade school near his farm in Ellis, he entered Pacelli High School in Stevens Point. It was there that he met the Christian Brothers who taught at the school. According to his siblings, young James often thought about being a priest, to the extent that he would play the role of priest and “say Mass.” However, after experiencing the values embraced by the Christian Brothers, he decided to join the order.

A Christian Brother is someone who follows the call of the Lord and consecrates himself entirely to Him through the religious vows of poverty, chastity and obedience, in order to dedicate his whole life and all his strength to the mission of educating children and young people. Often, brothers travel as missionaries to serve as educators to the poor, the oppressed and the downtrodden. This was the life that Brother James willingly chose.

Brother James began his missionary work by teaching in Nicaragua, where he even helped build a vocational school complex. His next assignment, in 1981, took him to the Indian Center at Huehuetenango, Guatemala, where he affectionately became known as Hermano Santiago (Brother James). He wrote, “The days are often long, but I thoroughly enjoy my work with the Indian boys. Through daily association, I have come to respect and love them all and to have a deep respect for the centuries of Mayan history and tradition that are their heritage… I always find it a joy to visit the homes of the boys from the Indian Center. The Indians form about 50 percent of the country’s population, but they are the poor, the oppressed, the forgotten ones of Guatemala. Many of them are desperately poor, the majority is illiterate and malnutrition and mortality are endemic.”

At the time of Brother James’ tenure, Guatemala was immersed in a bloody civil war between the ruling military junta and opposition guerrillas fighting to overthrow it. Unfortunately, the military junta viewed the Indians—descendants of the Mayas—as allies of the opposition forces. Brother James and his fellow brothers at the Indian Center found themselves at odds with the junta because they would help students who were being conscripted into the army even though they were legally exempt from military service. They would secure their release by proving to authorities that they, in fact, were students at the Indian Center.

On Saturday, Feb. 13, 1982, Brother James was gunned down at the Indian Center and died of his wounds. There are no clear answers to why Brother James was a target or who was responsible for the attack. However, two days before the shooting, there was a record of another Christian Brother who went to the authorities to secure the release of a Mayan pupil, but the military refused. However, the brother was insistent and persevered in his argument to have the boy released. Some people think that the attack on Brother James was meant to be a warning to the Christian Brothers to stop interfering with government matters.

Brother James’ dedication to his life’s mission, the example of his life and his martyrdom resulted in his beatification on Dec. 7, 2019, in Huehuetenango. He is now referred to as Blessed Brother James Miller, the final step before being declared a saint.

Although Blessed James and Servant of God Sister Thea came from very different backgrounds, their mind-set, thoughts and actions were remarkably similar: They both joyously celebrated and respected the different cultures of peoples around the world knowing that all are made in the image and likeness of God. No one is excluded from God’s love. They were extraordinary champions of social justice.

Reflecting on the lives of these two exceptional people that lived close to us, Father Jeffrey Hennes, pastor of St. Joseph Parish, brought up the idea of adding statuettes of Blessed James and Sister Thea to be placed at the base of the altar, joining 10 others already in place. This was a continuation of a project begun by the late Father Lyle Schulte, who was pastor from 1979 to 1996. Ellen Miskowski, a parishioner of St. Joseph Parish, said, “Blessed Brother Miller was chosen because of his close ties to the area and Sister Thea because Father Lyle had a particular fondness for her. Great care was taken to make sure the statuettes were as close to the originals as possible. Drawings were rendered, then statuettes were carved and finally presented to the parish on the first weekend of June 2021.”

The addition of the statuettes of Blessed Brother James Miller and Servant of God Sister Thea Bowman continues the legacy of Father Lyle Schulte and the commitment of the people of St. Joseph Parish to affirm the cause of social justice in the world. The statuettes serve as reminders for all who gaze on the images to pause and reflect how people of other cultures enrich the lives of all of us as one body in Christ. Their local connections remind us all that sainthood begins at home.