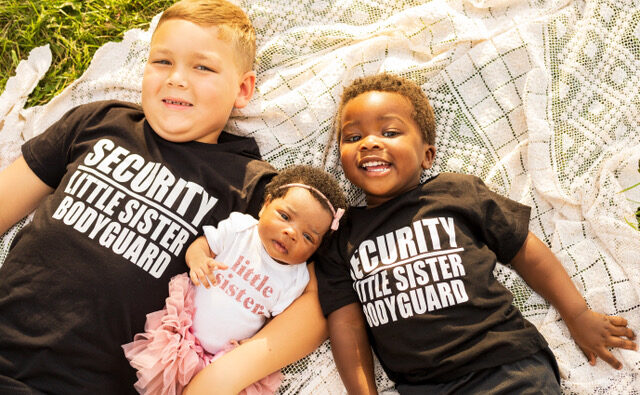 Jenna and Andrew put their Trust in God

Andrew and Jenna Brueggen live in a modest home in a quiet neighborhood. Little bikes, toy trucks, a couple of puppies and delightfully energetic kids welcome you into their home. The pair have been married for 10 years and welcomed three children—Oliver (7 years), Barry (2 years) and Nora (5 months). They met in college on the track and field team in the spring semester at the University of St. Thomas. Andrew originally had planned to join the seminary in the fall, but Jenna derailed those plans in the best way possible. They jumped into marriage two years later and, like most newlyweds, thought they were prepared.

Andrew and Jenna struggled with infertility for the first three years of their marriage. After years of treatments and medical interventions, the two decided to adopt. “I grew up with it,” Andrew said. “My older sister and younger sister were both adopted. My parents are basically saints. They fostered kids all while I was growing up, so it was just how my family was made.” The spouses began pursuing adoption. Once all the paperwork was done and they were ready for their first home study, they found out that Jenna was pregnant and hit pause. After settling in with Ollie, the pair began experiencing secondary infertility. Andrew said, “Usually what happens is you get pregnant once, and then you think you can do it again.” Jenna reflected and said, “It was so emotionally exhausting because we tried so many things. Each month felt like a complete failure because we tried more treatments and nothing worked. After Ollie was born, it was like, ‘When do we give up on trying and look at adoption again?’ It felt like another miscarriage every single month, so we decided to start adoption again.” Andrew said, “We knew we would adopt at some point, and it was like everything fell into place, or it seemed at the time.”

After much prayer, they decided to move forward again. Adoption can be a tricky process, but generally couples work with an agency in their home state to complete preliminary paperwork and do a home study. After the home study, the agency then sends the couple’s information out to other agencies around the country to be matched with parents placing their children for adoption.

They found a private agency, did a home study, got all their paperwork done in short order and matched with a family quickly. “Everything was going fine when all of a sudden our social worker up and left! It was about three months before we got assigned a new social worker and we had to redo everything, since it had been so long,” Jenna said. After this, they were matched with an agency and birth mother in Michigan.

“We were up in the Twin Cities with Ollie at the Mall of America and all of a sudden I get a FaceTime,” said Andrew. “I pick it up and it was our social worker, Tara, from Michigan. She’s like, ‘Hey, you guys got matched!’ At that time, we didn’t really know how this all works, so, when she asked for us to wire her the funds for the adoption, we did. We didn’t know that it wasn’t the proper way to do things, since we hadn’t gotten this far in the process yet.

“From August to November, things seemed to be going OK and normal. We got ultrasound pictures, we found out it was a boy, so we had a gender reveal, and then, on Nov. 12, 2018, we got the call. I am at youth group, about to start, when my phone rings and it’s the FBI asking if we were working with this social worker, Tara. The FBI agent asks, ‘Are you guys matched for an adoption? I am sorry, but it’s all fake.’ I then had to go lead a youth group and act like it was all fine. I ran through the youth group and then got home that night. We were on the phone with the FBI ‘til 2 or 3 o’clock in the morning submitting files, texts, photos and all this stuff as evidence against her. It turns out, she’d been doing adoption scams for a long time and we were one of the last families before she got caught.”

“Well, she started doing it the way she was supposed to,” said Jenna, “She was never really a social worker, so she was never supposed to have been facilitating adoptions in the first place. Then she realized she could make money by promising the same birth mom or actress to plan the whole thing. Tara had even told some families that their birth mom had died or the baby died or she changed her mind.”

“For every one adoption that was matched and actually went through,” Andrew said, “there would be four that didn’t, and this way she got away with it for so long.” Tara is now in prison for more than 25 years. Though some families did testify in court, Andrew and Jenna did not, as they had submitted enough factual evidence.

“After this, we were done,” Jenna said. “From Thanksgiving to Christmas, we were emotionally dead on the inside.” The couple had no intention of ever adopting again. Andrew remembers their conversation from January 2019: “Jenna said to me, ‘I think we need to start again,’ and I was like, ‘You’re insane.’” Jenna said, “Just to survive that, it was constant prayer. All along I had a feeling that we were supposed to have more than one kid and we didn’t know how or when and, after lots of prayer, all of a sudden, I knew it was time.

“I don’t know how to explain it other than saying, ‘I didn’t feel right.’ My heart was heavy until I had talked to Andrew and we had started moving forward,” Jenna said. “It was so freeing to submit that paperwork. It felt like we’d gotten it off our chest.” When their paperwork was received, they were told by their new social worker, Jamie, that there were no children up for adoption at that time.

Around Easter of 2019, they were matched with a birth mother in Florida. “Talk about God’s providence,” Andrew said. “Barry’s due date was exactly nine months from the day we got the call from the FBI. That’s where it’s easy to see God’s hand in our life.”

The young family had planned on adopting again at some point, but they had planned to take time to settle into life as a family of four while they worked through some of the expenses from Barry’s adoption. “The goal was to pay it off before we started thinking about it again,” Andrew said.

It was just before Christmastime 2020 when Jenna explained, “In prayer, I got this feeling. I prayed about it on my own for three more days and then I came out into the kitchen, where Andrew was, and I said ‘We need to adopt again. We need to not only start the process now, but we need to call Jamie today.’ and I started printing out the paperwork.” Andrew called Jamie, who, once again, told them there were no children waiting to be adopted. “The very next day, Jamie called us and told us that Barry’s birth mother was pregnant again and she specifically requested to place this baby with us,” Jenna said. Since their birth mother was so early in her pregnancy, it was unofficial until the paperwork was finalized in February of 2021. In another nod from the Holy Spirit, they brought their daughter, Nora, home from Florida nine months after Jenna first felt called to adopt again.

The Brueggens attribute their resiliency to prayer, the example of Andrew’s parents, the Holy Family and the Blessed Mother. Andrew said, “The Holy Family was put into less than ideal circumstances, but they managed. Mary and Joseph were raising the Son of God and still had to flee their home, so we really clung to their example.” Jenna said, “Every single time something went in our favor, was when I had put my blind trust in God and I thought of Mary. She said, ‘Yes’ to God, became an unmarried pregnant woman and brought Christ into the world. Having her example really helped me to listen to what the Holy Spirit was asking of me.” Andrew and Jenna hope that their story can serve as a testament to the power of prayer and the Holy Spirit: “God’s plan is greater than anything we could have even imagined.”

Story and photos by Rachel Persson
Main Photo: “Bodyguards” Oliver and Barry welcome their little sister in the spring of 2021.
Published in the January/February 2022 Issue of Catholic Life Magazine