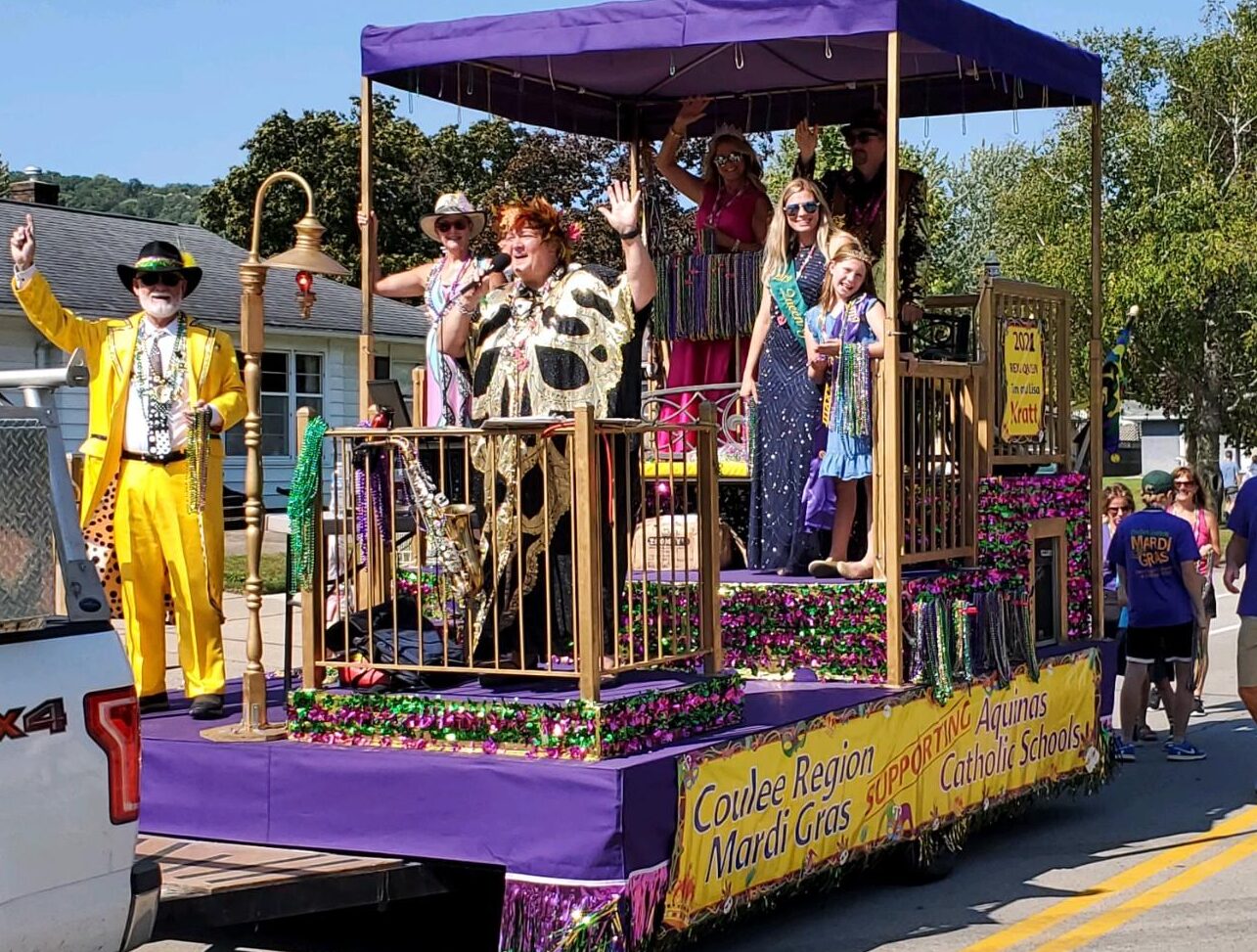 Mardi Gras Brings Fun and Festivities to the Coulee Region

“Our young people are the Church of today and tomorrow. It is imperative that we provide them with schools ready to address their spiritual, moral and academic needs.” Renewing Our Commitment to Catholic Elementary and Secondary Schools in the Third Millennium, United States Conference of Catholic Bishops, 2005.

Tom and Lisa Kratt of Blessed Sacrament Parish in La Crosse know firsthand the benefits of a Catholic education. “Growing up, Tom attended Blessed Sacrament Grade School and I attended Cathedral. We both had wonderful experiences in school that formed who we are today. We enjoyed strong bonds with our classmates and built connections that last a lifetime,” Lisa says. “For example, many of the friends we have right now are people we met in grade school.” Tom agrees, adding, “Catholic schools not only help to strengthen people’s Faith, but they also build a strong sense of community. As a Catholic, we’re called to attend Mass every Sunday; why wouldn’t we want a Catholic education to go along with that?”

The Kratts’ commitment to Catholic education made them ideal representatives for the Coulee Region Mardi Gras—an annual fundraiser for Aquinas Catholic Schools (ACS) for the past 30 years. Tom and Lisa reigned as “Rex and Queen” of the 2021 Mardi Gras and they, along with their faithful “Krewes of the Carnivale” (representatives of local Catholic parishes), enjoy spreading awareness of the importance of Catholic schools and raising funds for the five schools within the unified school system.

“We dress in our costumes and pass out beads, which is always popular. Everybody always likes to get some Mardi Gras beads!” – Tom

Amy Bettis of Roncalli Newman Parish in La Crosse has been an integral part of Mardi Gras since 2001, when she first volunteered to sit on the board and other planning committees. In 2017, she took over the role of Mardi Gras president. Amy says the idea of creating a La Crosse Mardi Gras celebration first began in 1989. “Jerry Berns was the executive director of the then-newly created Deanery Catholic Schools. One evening, after a fairly intense deanery meeting regarding the core issues of finance, unity and promoting Catholic education, Jerry had an epiphany,” she explains. “Why not celebrate Mardi Gras to unify the schools, community and parishes? Mardi Gras is rooted in Catholic tradition as the last celebration before the beginning of Lent.”

Approval to begin planning the event was granted by the Finance Committee of the Deanery Council in 1990, but the first-ever La Crosse Mardi Gras didn’t actually take place until the following year. “The scope of the undertaking would require considerable planning,” Amy says. “That time and care laid the foundation for the inaugural event in 1991 and future Mardi Gras celebrations.”

The early Mardi Gras celebrations were ambitious, multi-day, action-packed events, which became rather cost- and time-prohibitive over the years. Eventually, the event was scaled back to focus on a few key annual events. Since its inception, the Coulee Region Mardi Gras has raised more than $315,000 for Catholic education.

The way in which raised funds are distributed has also changed over the past 30 years. “In the early days, funds were used for general school funding. As it evolved in our community and education costs rose, our focus turned to tuition assistance,” Amy says. Various Mardi Gras sponsors began to request their donations be put towards specific line items such as technology. Money began to be distributed based on those requests, as well as individual school needs and tuition assistance. “We needed a better way to channel funds to meet the changing needs of ACS students and their families, yet satisfy sponsor requests,” Amy says. “In 2018, the board decided to create the Mardi Gras grant program.”

This new program channels resources directly to teachers and students. “Teachers and ACS staff can apply for up to $1,500 in monetary grants,” Tom explains. These grants should demonstrate a direct, positive impact on ACS students in one or more of the following categories: mental/physical health and well-being; access to technology; educational advancement and enrichment; fostering Christian values and growth in faith; and student safety. “The grant program is great because the teachers know what they need,” Tom continues. “Maybe it’s something for their classroom or they want to take their class on a special field trip.”

If a need exceeds the $1,500 grant cap, parent/teacher organizations at the various schools often step up to donate additional funds. Lisa says she’s grateful the Mardi Gras can directly assist teachers through this program. “Teachers work hard every day, and they deserve the extra funds,” she says. “That’s what is gratifying about being part of Mardi Gras. You know you’re doing some good for the schools and you’re helping to keep everyone educated and happy.”

“Everyone was excited about the grants,” Amy adds. “The board could confidently meet sponsor requests, know exactly what ACS staff needed for students and still endow the traditional tuition assistance. It was a win-win-win.” She says approximately a quarter of Mardi Gras funds raised are set aside for tuition assistance and the remainder is assigned to the grant program.

While the Mardi Gras can be commended for its fundraising efforts, it also has the added benefit of bringing together local parishes and the community through various fun-filled events, including a Royal Reveal, Costume Ball and Fat Tuesday celebrations. In the tradition of the original New Orleans’ Mardi Gras, the Coulee Region Mardi Gras is centered around a Rex and Queen and their Krewes, represented by a Lord and Lady. There is one Krewe for each of the parishes involved in ACS: Blessed Sacrament, St. Joseph the Workman Cathedral, Holy Trinity, Mary Mother of the Church, and Roncalli Newman in La Crosse and St. Patrick in Onalaska.

Each year, the Rex and Queen, along with the Krewes, reinvent themselves with innovative themes. “Everyone dresses in costumes that represent a little of their life story,” Lisa explains. “For instance, Tom and I were prom king and queen in high school, so that was our theme in 2009 when we were the Krewe representing Blessed Sacrament.” The Krewes do skits based on their theme that are shown throughout Mardi Gras. “It’s a lot of fun,” Lisa says. “We’ve now gone to filming our skits, so they’ve gotten more innovative and creative through the years.”

Tom says he enjoys interacting with Krewes from the various parishes in the community. “You get to meet people from other parishes that you might otherwise never know,” he says. “It really helps to unite the local parishes.” Lisa adds that many of the priests also like to get involved in the fun. “We try to get the priests to be in our skits,” she laughs. “It’s really nice to see them in another setting other than church. It also gives you the opportunity to spend time with priests from parishes other than your own.”

The Mardi Gras “royalty” also spend a day touring the Catholic schools, bringing a bit of Mardi Gras merriment to the students and staff. “That’s always a great day,” Lisa enthuses. “It’s fun to be with the students, do some singing and dancing. The kids really seem to enjoy it and it gets our presence out into the schools.” They end their touring day by visiting with the Franciscan Sisters of Perpetual Adoration at the Villa St. Joseph and St. Rose Convent. “It’s always so fabulous to be able to spend time with the sisters,” Lisa says.

The Coulee Region Mardi Gras is also represented in local festivals and parades throughout the year. “We have a great float with current and past Rexes, Queens and Krewes, as part of the parade group,” Tom says. “We dress in our costumes and pass out beads, which is always popular. Everybody always likes to get some Mardi Gras beads! Taking part in local parades helps us to get our presence known throughout a community.”

Amy says participating in the Mardi Gras is an ideal way for people to support Catholic education, even if they don’t have any children enrolled in ACS. “Students, teachers and families of ACS enrich the local Faith community. Their presence in your church promotes a vibrant Christian experience all can foster and enjoy,” she says. “My children have since graduated from the ACS system, yet here I am, several years later, still actively supporting Faith-based education. I see immense value in supporting those who share my Faith and core values. In times of crisis, we see who the helpers are. In my experience, many of them are fellow church members, ACS families and alumni.”

Amy is proud of the fact that ACS is one of four private schools in Wisconsin to have been recognized by the Department of Education for achieving superior standards of academic excellence, while instilling their core values of Faith, integrity, excellence, leadership and dignity in our youth as future leaders. She sums up the importance of Catholic schools by saying, “In the challenges and strife that surrounds us, it is comforting to know there is a place to send our children that can be a shining example of when good, like-minded people unite, amazing things happen.”