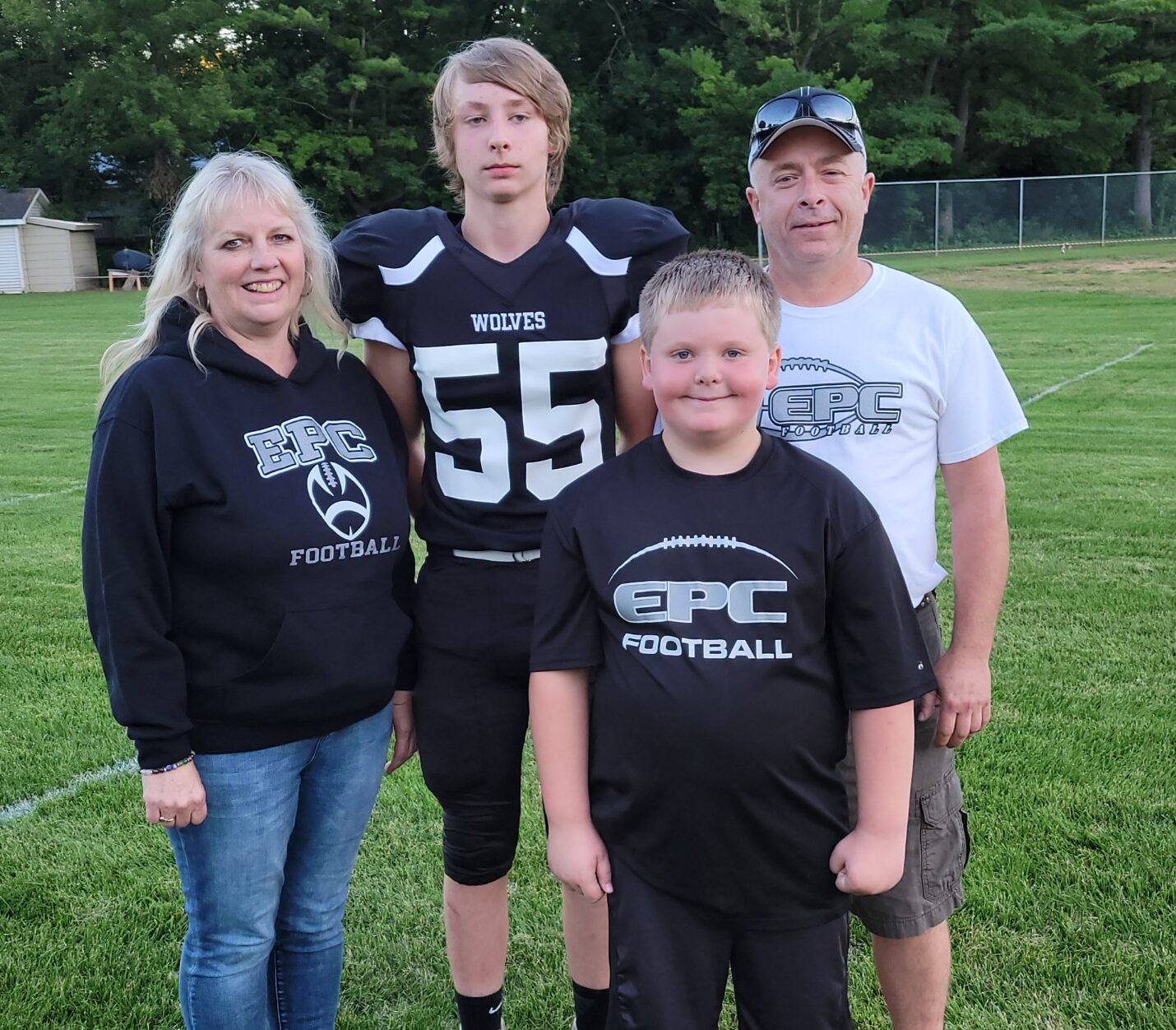 The Luther family’s story of Faith and service

Amy Luther is a lifelong member of Sacred Heart Parish in Ellsworth. Her husband Jarrod, a native of nearby Arkansaw, joined the parish when they got married and settled in the area. Now they are raising their two boys—17-year-old Bennet “Ben” and 10-year-old Elijah “Eli”—at Sacred Heart Parish.

Amy grew up on Webb Hill Farm, which has been in her family for more than 150 years. She calls hers a “typical farm family” of the time in which she and her siblings shared many responsibilities. “We helped feed the cattle, cleaned the barns, harvested the crops, mowed the lawn, helped in the garden, prepared meals and anything else that came along,” said Amy. They worked hard together but also played hard, enjoying their cats, dogs, horses and lots of time outside. They took part in 4-H and school sports. “We went to church every Sunday and attended CCD too,” Amy shares, recalling her encouraging teachers there who urged them to participate at Mass by singing, lectoring and serving.

Jarrod and his sister grew up sharing a yard with one set of grandparents, while his other grandparents lived just four miles down the road. Their family also farmed for a bit, selling their cow herd when Jarrod was five. Both parents came from families of eight children, so he recalls that there were people around all the time. Jarrod served for Mass nearly every Sunday for his beloved childhood priest, Father Matthew Malnar, at St. Joseph Catholic Church. “Father Malnar was always trying to recruit me into the priesthood,” Jarrod jokes, recalling the fond memory.

Jarrod and Amy met while attending a concert in Elmwood and began dating shortly thereafter. After getting married, the Luthers settled less than a mile from where Amy grew up and where her mom continues to reside. They still spend time at Webb Hill Farm, visiting and helping when they are able. Amy especially cherishes the time she spends helping her mom in the garden and with barn chores for the horses.

Amy enjoys the horses so much that she talked Jarrod into purchasing a blue roan mare during the early days of the pandemic. The horse was temporarily settled at their home before they were to move her to Amy’s mom’s farm, but the mare surprised them all with a foal. The whole family pitched in to keep the horses on their property and the pair became “the most unexpected but joyful blessing during the pandemic,” Amy says, especially as Amy was able to watch them from her window while she worked from home.

“I feel strongly about instilling trust and Faith in God in our children and in those at CCD.” -Amy

Jarrod is an operations manager at Ellsworth Cooperative Creamery and Amy serves as the Dementia Care Specialist for the Aging and Disability Resource Center of Pierce County. In this season of life, the couple’s spare time is spent cheering on their boys as they participate in school sports and music endeavors. The family enjoys occasional summer weekend trips camping and fishing.

The Luthers have always been active and involved at their parish, but the extra responsibilities brought on by the pandemic found them stepping up even more. Jarrod became the COVID compliance person at Sacred Heart Parish, ushering and helping register parishioners. Ben was an altar server and Amy and Eli could be found in the choir loft providing music.

Amy has actually been one of the organists at Sacred Heart Parish since she was a sophomore in high school. Inspired by the organist from her childhood, Amy shares, “I loved to watch her play as she was so passionate and expressive—especially since she ended the service with a celebrational piece after the final song.” During high school, Amy and one of her closest friends took turns playing for the Saturday evening Mass. She would spend much of the day Saturday at the parish preparing the music. She admits that it was a big challenge for her to overcome her nerves and be able to perform the organ music in front of everyone at Mass, but she persevered and has continued to serve in music ministry all her life. Amy is now the primary musician at Sacred Heart Parish and still plays music after the final song as she was inspired to do all those years ago.

As soon as Sacred Heart Parish was able to reopen after the pandemic shutdown, Amy resumed playing the organ while Eli helped announce the songs, read the Gospel acclamation and all of the other responsibilities required to provide music. “I think [Eli] could take my place, if needed, to assure that we had music,” Amy shares. “He was very helpful to me [last] spring as I broke my ankle and had crutches for about two months. He took over putting the song numbers up on the board in front of the church, turned everything on and off and just helped me to manage getting up and down from the balcony each week.”

Ben and Eli are both altar servers and participate in the monthly youth Masses in various capacities. Amy has taught CCD for most, if not all, of the years since Ben started in first grade. “I feel strongly about instilling trust and Faith in God in our children and in those at CCD. I feel that God has blessed me with my husband and boys and a good life in which I can use the talents He’s given me to help others in my community,” Amy explains. “We try to be hands-on helpers and encourage others to do the same for the benefit of our church and our community.”