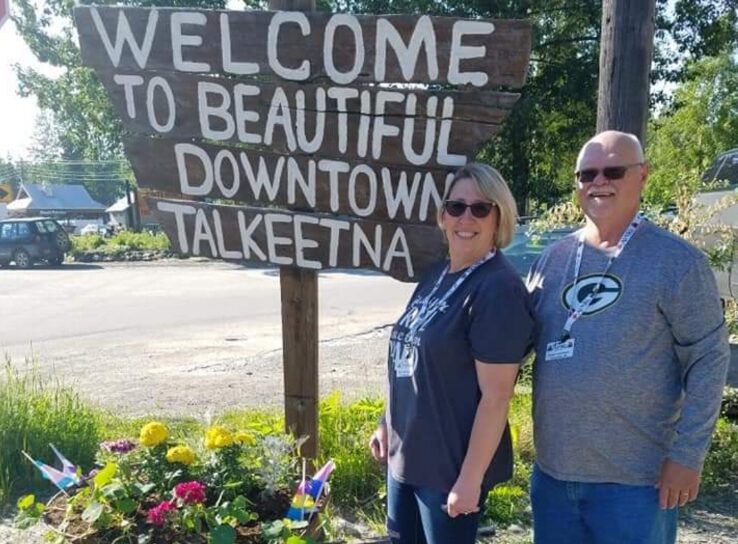 Brent and Kelly Hutchison of St. Charles Borromeo Parish in Genoa are living and loving life. Relocating from Beloit in 2013, the couple sought a quieter pace of life and the scenic countryside of Southwestern Wisconsin after Brent had fond memories growing up visiting his grandparents in the area. They settled on a home in Ferryville and set to work making a new life for themselves.

Both Brent and Kelly love to work with their hands and create. Kelly dabbles in many types of arts and crafts. She especially enjoys punch needle work, painting and crocheting, while Brent is skilled at woodworking and stained glass. The Hutchisons’ hobbies are perfect additions to the giftshop they own and run called Gracie’s Hutch. The warm and beautiful shop is located in an old Methodist church building in Stoddard, and they sell everything from local artisans’ handmade items to antiques and repurposed items.

Brent is a retired engineering project manager and Kelly teaches art at St. Charles Catholic School. She is also the religious education coordinator for the parish. Before she began teaching art, her neighbor held the job and encouraged Kelly to apply when she left. Sharing with her students both a subject that is close to her heart and the artistic talents she bears, Kelly says, “I love seeing their excitement with their finished artwork—masterpieces!”

Kelly and Brent also team-teach religious education to fifth-through-ninth-graders, and have done so for the past six years. “We [have] had a fantastic group of students who were willing to dive into the Life Teen EDGE program [and] it was a blast,” they share.

In their spare time, the Hutchisons enjoy the outdoors, boating and traveling. Some of their favorite trips over the years have been to Disney World, Alaska and the Smoky Mountains. Kelly also finds time to sit down with a good book while Brent pursues hunting and fishing.

Brent and Kelly’s story, however, begins long before their move to Ferryville. They endured a lot of hardships leading up to the life they’ve created. These struggles and crosses, however, made them who they are and also brought them together.

Kelly grew up in a broken home, separated from her biological father from the time of her parents’ divorce when she was three, until the age of 12. At 12, Kelly began living with her mother in Lake Delton for seven months a year and Creston, Iowa, with her father for the other five. She was raised Catholic, but after the divorce, Kelly says, “My mother continued to stay in the Catholic Faith although it was not easy in 1964 for a single woman with two children to do so. Her steadfastness in the Faith is what kept me strong.” Then when Kelly was about six, her parents’ marriage was annulled and her mother remarried a “wonderful, strong, faithful Catholic man” and they built a life in Lake Delton as hotel owners.

Kelly and Brent both had first marriages of 20+ years. They each fell away from their Faith for a time. But the Lord always had his hand in their stories and brought the two together and in doing so, on a journey toward Himself.

Brent grew up Lutheran and later in life joined the United Pentecostal Church for a short time. He became very involved in youth ministry there. “I was a bus driver on Sunday and would go out on Saturday to find children who wanted to go to church on Sundays,” he shares. He also started a puppet ministry to teach Bible stories to young people and became very skilled at creating puppets. But Brent fell away again, though he never stopped seeking.

Kelly and Brent met after she accidentally sent an email to the wrong person—which was him—in her attempt to make a contact for her youth ministry work with Fellowship of Christian Athletes. They had a common background of youth ministry and decided to meet up.

“I knew when I decided to start dating that I needed a religious partner,” Brent explains. “When I met Kelly, we told each other about our faith. We both agreed we wanted our marriage to be part of our faith walk.”

Kelly adds, “I knew that after being in a 20-year marriage where we were not evenly ‘yoked’ in Faith, I needed to have that if ever I was to remarry. At first, I was not looking to remarry. But I truly believe that God’s plan was different. He kept opening doors for Brent and I to be together.”

The couple was married and began searching for a Catholic parish in Beloit. Kelly had come back to the Catholic Faith a few years before through RCIA and, after much mutual discernment, Brent chose to enter the Church as well. He started RCIA at their parish, where Kelly served on the teaching team. “I remember it being so hard to not take the Eucharist until graduation,” Brent recalls. “But I believe this happened for a reason and I have become stronger in my Faith.”

Both Kelly and Brent were able to get their previous marriages annulled and their marriage to one another blessed in the Church. So now the Hutchisons move forward, united in the Faith. They’ve blended Brent’s four adult children and Kelly’s two and take joy in being grandparents of 13.

“God put an angel in my path,” Brent says. “That angel was Kelly.”

“I can’t imagine finishing out my earthly journey without him,” Kelly responds of her husband.

Perhaps the wise C.S. Lewis expresses their sentiment best, “You can’t go back and change the beginning, but you can start where you are and change the ending.” And so, they have.