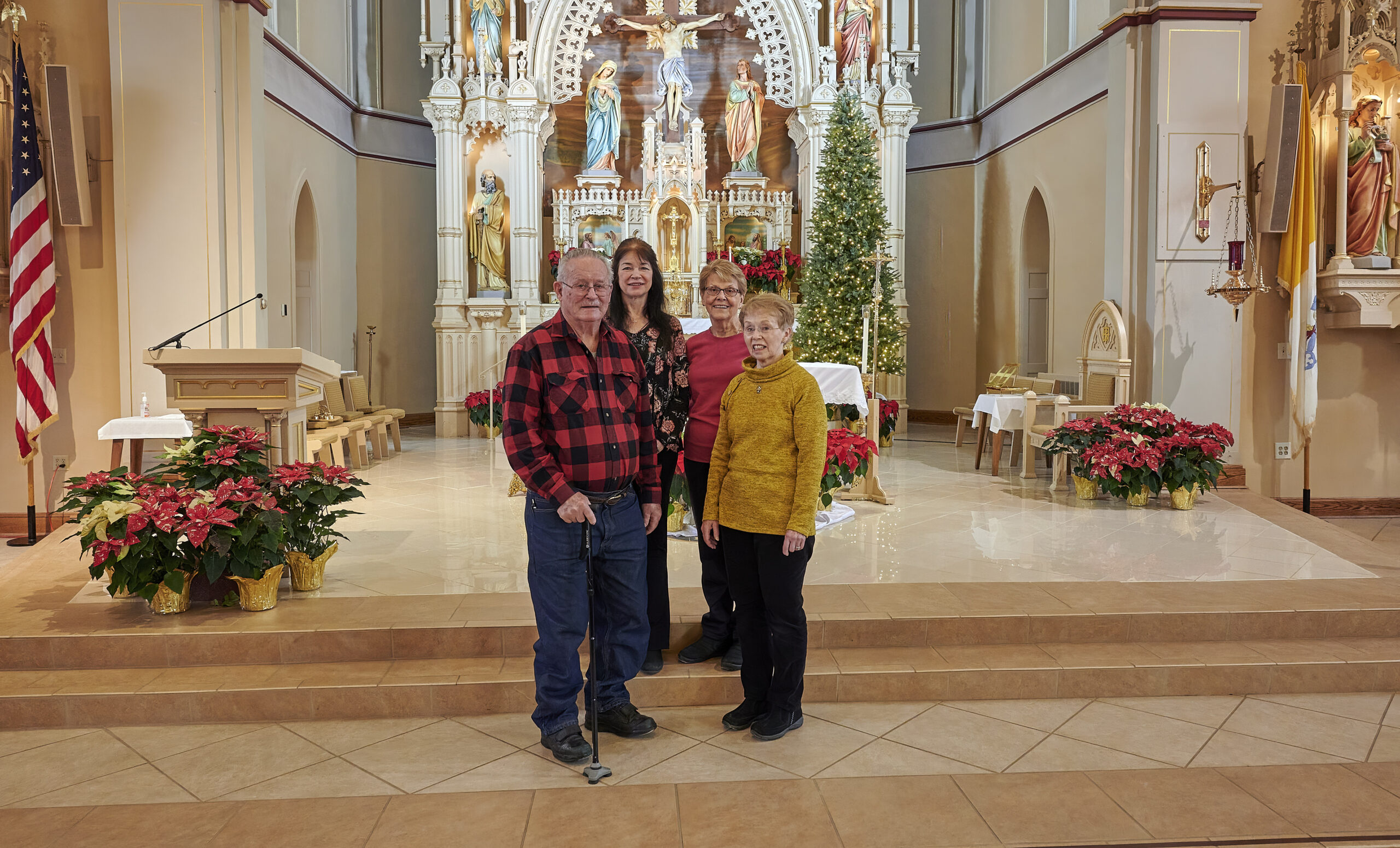 Marianne Koch, Fay Schultz, Joe Somers and Renè Vollert are among more than 30 parishioners of St. Peter Parish in Stevens Point who set aside a special time during the week to adore the true presence of Christ in the Eucharist. Placed in a monstrance, a vessel used to hold and display the sacred host, people come to publicly worship the Most Holy Sacrament outside of Mass. Although one can experience the Lord at any place and at any time, it is in eucharistic adoration when one often experiences an especially intimate connection with our Lord.

“It’s quite simple,” said Joe. “I have a closer relationship with God. It is a personal relationship. It is closer because of time spent in prayer.” Joe started participating in eucharistic adoration about 25 years ago. “I am reminded of a discussion I had with a lady who said, ‘Just going to adoration and being there with God is a prayer.’ So, we don’t have to do anything special to do whatever the Lord leads us to do.” Joe typically spends an hour a week in adoration and also spends an hour during the day on the first Friday of the month.

Adoration has made me a better person. There isn’t anything better than being that close to Jesus.” —Marianne

“I just love adoration,” said Renè. “I started it many years ago. It’s just the peace and the calm you need. I have a hectic life and when I come here—it’s just—everything is good and peaceful and calm and understanding when I am with Jesus. I just need that. People who lead hectic lives should go to adoration. It’s just the mellow sweetness they need in their life.”

“I pray for souls in purgatory,” said Renè. “I say the stations of the cross for my family. I pray for people who are abused, like children and the elderly. I talk to Jesus about what is going on in my own world and tell Him that I need help—help to get through the day.”

Marianne said that people who participate in adoration are such a part of her life now. She started when there was a need for leaders to help organize people in the parish who were interested in participating in eucharistic adoration. She decided to volunteer and met with Father Arul Joseph Visuvasam, pastor of St. Peter Parish, who introduced her to Renè. Marianne said, “I did not know Renè at the time. I met her and we agreed to work together to organize adoration for the parish. Even though our lives are very different, we have become good friends. And that is true with all the people who are adorers. I consider them to be my very good friends.”

“I usually come early evening. [Adoration] has made me a better person. There isn’t anything better than being that close to Jesus.”

Marianne said the parish community is very supportive of eucharistic adoration. There are 24 permanent adorers and about a dozen substitutes, whom she rarely must call. Others participate without even signing in. Father Todd Mlsna and members of the pro-life group he belongs to meet each week from 5 to 6 p.m. to participate in adoration together. Others donate money for reading materials people can use during their time in adoration.

Fay grew up at St. Peter Parish and has been a parishioner all her life. “I never missed Mass or anything like that, but I didn’t consider myself a real strong Catholic. I was still growing in my Faith. Then, when I was invited to participate in eucharistic adoration, I did not know whether I should or shouldn’t. Finally, I thought, I suppose I could take an hour. And so, I started spending an hour every week of every month, and I am still doing it. Except for being away on vacation, I don’t think I ever missed adoration for the past 20 years.”

Along with Joe, Renè, Marianne and other adorers, Fay experiences an unexplainable peace when she is close to the Lord in adoration. Fay’s daughter Amy joins her in adoration, even though she has young children at home. “She too felt it was a good way to feel good about yourself,” Fay said. “Talking to the Lord became part of our lives. This is something we need to do, and you can’t wait until it is the next time for adoration.”

After the death of her husband, Fay found peace in adoration. “Adoration eased the sadness that accompanied the loss of my husband and Amy’s father. I have no question about that. Adoration has increased my Faith and trust in the Lord.”

Joe, Renè, Marianne and Fay encourage everyone to take time and give eucharistic adoration a chance. “We can come to church to talk to God, to give him all our problems, and He comforts us.”