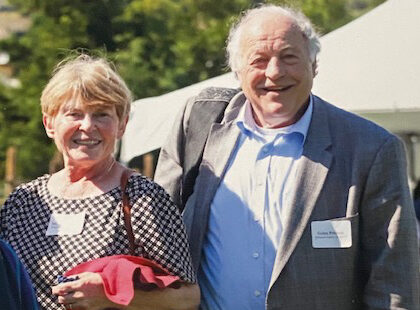 “We are not converted only once in our lives but many times and this endless series of conversions and inner revolutions leads to our transformation.”
–Thomas Merton

“It has taken me so much soul-searching and prayer to choose to be a participant in the Faith journey from a private life to a public life,” admits Galen Pittman of Blessed Sacrament Parish in La Crosse. His path to deeper Faith did not come suddenly. For him, it was a gradual process highlighted by major life events and divine guidance.

Galen was born in Plum City and resided on a 100-acre farm. “I grew up in a pretty normal family for this rural setting in Wisconsin, basically being assigned chores on the farm which related to my size and age. I learned to harness and handle a team of horses and operate a tractor at a very early age. As I was the only boy in the family, I was expected to do farm work.”

During the summers, Galen’s father gave him and his sisters an acre of land on which to grow cucumbers to sell to the pickle factory in Durand. Each child had assigned rows for planting, cultivation and harvest. They picked every other day and delivered them to the factory, earning $100-$150 per summer, which became their spending money for the year.

“I prayed every day that I would meet a woman who I would immediately fall passionately in love with.” -Galen

Calling himself a “scrawny kid,” Galen grew into his own, bulking up and becoming a talented athlete in football, basketball and baseball during high school. He even continued his football career into college. He shares, “I was not always a good student, having some bad years. Once I decided to become a good student, about the seventh grade, I excelled in academics.”

Galen’s family worked, played and worshipped together. He and his sisters would run through straw stacks, have snowball fights, ride bikes, climb trees and explore when they weren’t helping on the farm. They were close-knit and especially loved celebrating holidays with their mother’s home-cooked feasts. But when Galen was 14, his life changed dramatically. His mother died of breast cancer after more than five years of suffering. “Although my dad tried very hard, it was hard as a single parent with teenagers and pre-teenagers growing up. Because of the pain (and nobody can experience it until you’ve lost a spouse), he took his own life when I was 20. I operated the family farm during the summer, preparing for an auction and a liquidation of the farm, which took place in August of that year.”

Galen knew that farm life was not for him and, instead, returned to college to finish his junior and senior years at the University of Wisconsin–River Falls. One day in the fall of his senior year, he ran into a Naval Officer Candidate School recruiter. He decided to apply and was accepted into the school, which he started promptly after graduation. Upon completion of Officer Candidate School, Galen was assigned to a carrier in Hawaii, where he was an active-duty crew member for three years, serving in the Western Pacific. The last period of duty was during the Vietnam War. In August of 1965, Galen was released to attend Marquette Law School.

“Marianne’s kindness, generosity and loving, caring and spiritual guidance have slowly brought me to my position in life. -Galen

As a young man in his early 20s, Galen shares: “I prayed every day that I would meet a woman who I would immediately fall passionately in love with.” He dated several beautiful women but did not feel called to pursue any of them. Then, upon the urging of friends, Galen went on a blind date in April 1965 with a girl named Marianne Keegan. He drove to neighboring Mount Mary College to pick her up. “I observed her as she entered the room. I knew that this was the one woman I had been waiting for. I was instantly in love with her.” Unfortunately for Galen, Marianne did not quite have the same feelings. She was finishing her senior year and had a dietetic internship lined up in New York state. She couldn’t see fitting a relationship into her life at the time.

Galen and Marianne went on a couple of dates in May. She stood him up on a picnic date in early June. Galen was upset. He proceeded to her house and dumped all the food on her kitchen floor and left. “However, I came to my senses and asked her on a date in early July,” he explains. “She accepted and for the balance of the summer, until she left for New York, it was a very passionate summer romance.”

For the next year, Galen and Marianne had a long-distance relationship sustained by daily letters and phone calls and marked by visits while Marianne completed her internship and Galen, law school. “We struggled during this period, although very much in love,” Galen shares. Marianne did not want to return to Wisconsin, remembering her difficult family life and time spent in an orphanage. But, “by God’s Grace,” the couple were married in June of 1968 and moved to La Crosse, where Galen started practicing law.

“We wanted to have a large family and were blessed to have six children,” Galen says. Marianne was a devoted wife and mother to Brendon, Gavin, Ann, Steve, Wade and Greg. Alongside her responsibilities at home, she was passionate about her Catholic Faith and her pro-life work in the community. In many and varied ways, Marianne made her community a better place to live.

As Galen and Marianne raised their family, Galen continued his military service through the Naval Reserves for 24 additional years. He worked hard as an attorney, dealing primarily with creditor’s rights, and built up his own firm, Pittman & Pittman Law Offices, LLC. He, like Marianne, has been active with community service, helping support Marianne’s efforts, volunteering for Scouts, the Church and local sports-related programs. When the couple became empty-nesters, they traveled, visiting Medjugorje twice, the Holy Land and throughout the United States.

“After meeting my future wife and the subsequent marriage to Marianne, her kindness, generosity and loving, caring and spiritual guidance have slowly brought me to my position in life where I am at this time. During the time period when we were raising teenagers, I realized I could not control life around them, so I turned to God for help. I started to attend some daily Masses with Marianne and assisted her as much as I could with her pro-life activities. I could see the devil in my life. One night, I had a very vivid dream of a devil near my head watching me slowly tumble into hell. I told my wife of the dream and, as a result, I started to change my life. I joined another law firm, we prayed the rosary every night, we discovered the St. Bridgette of Sweden 12-Year Prayer and commenced the recital of the prayer every night for 12 consecutive years. We said the St. Faustina Mercy Prayer every day and [visited] the adoration chapel several times a week. We chose a standard time for adoration at 2 a.m. every Friday.”

In 2007, Galen suffered a near-death experience in the Minneapolis Airport. He died of a heart attack, but was saved by three nurses and a Navy corpsman traveling back to La Crosse on the same flight. Within two days, he had quadruple bypass surgery. Shortly after the experience, Galen shares: “I’ve had several dreams and visions … [One occurred] at a Mass at Blessed Sacrament. During the Eucharistic Prayer, I had this vision that God said, ‘God Loves You, Galen.’ It was so powerful and … I cried because of it. It changed my life because I didn’t feel worthy at that time, but when God said He loved me, that’s exactly what I needed to hear and I remind myself every day of that vision.”

In 2014, Marianne was diagnosed with dementia. As the couple adjusted to life with the debilitating disease, she was additionally diagnosed with stage-four lung cancer as a non-smoker in 2017. “Marianne lived for a year and a half, which allowed us to have some wonderful times,” Galen recounts.

As Marianne’s death approached, she and Galen leaned on the prayers and devotions they’d held throughout their marriage—St. Joseph, our Blessed Mother and St. Faustina’s Prayer of Mercy. Galen shares that, “At Marianne’s death, and when I saw her troubled with anxiety … and could see three little devils by her head, I continued to say the St. Faustina Prayer until they left her and she was in peace. She died in peace … while I was holding her hand in the living room.”

“After Marianne’s death, the adoration chapel at Blessed Sacrament Church provided me with a place of peace,” Galen explains. “I would spend 30-plus minutes a day [there] in prayer, five days a week right after work and before going home for the evening. I was able to talk to God, discuss with Him my life, my wife, my family, the pain and emptiness that I felt and the suffering that people undertake as a result of the death of a spouse or loved one. I could find peace in my life at the adoration chapel, and still do.” “Prior to my loss of my spouse,” he continues, “I was simply out of touch with what occurs to people [in the situation]. We think we know suffering, but we have no way of even coming close to understanding what is happening to the pain and suffering of the remaining person on earth.”

Adoration continues to sustain Galen, as does his family. He feels blessed to practice law with three of his children. “I have loved the practice of law,” Galen shares. “It was truly a profession that God had meant for me.” During his 54 years as an attorney, he’s been honored to swear in four new Wisconsin attorneys, the most by one lawyer in Wisconsin.

Aside from work, Galen keeps busy with carpentry, reading, traveling, restoring old cars and watching his grandchildren participate in sports. He’s currently studying the process of harvesting maple syrup in hopes of doing so on his property, just as he had assisted his dad in doing when he was a child.

“It was Faith that has brought [me] to this point in life,” Galen says. “My journey of Faith continues to this date, following the pattern that will hopefully bring me to heaven and the eternal happiness with God, Marianne and all of my family and friends.”