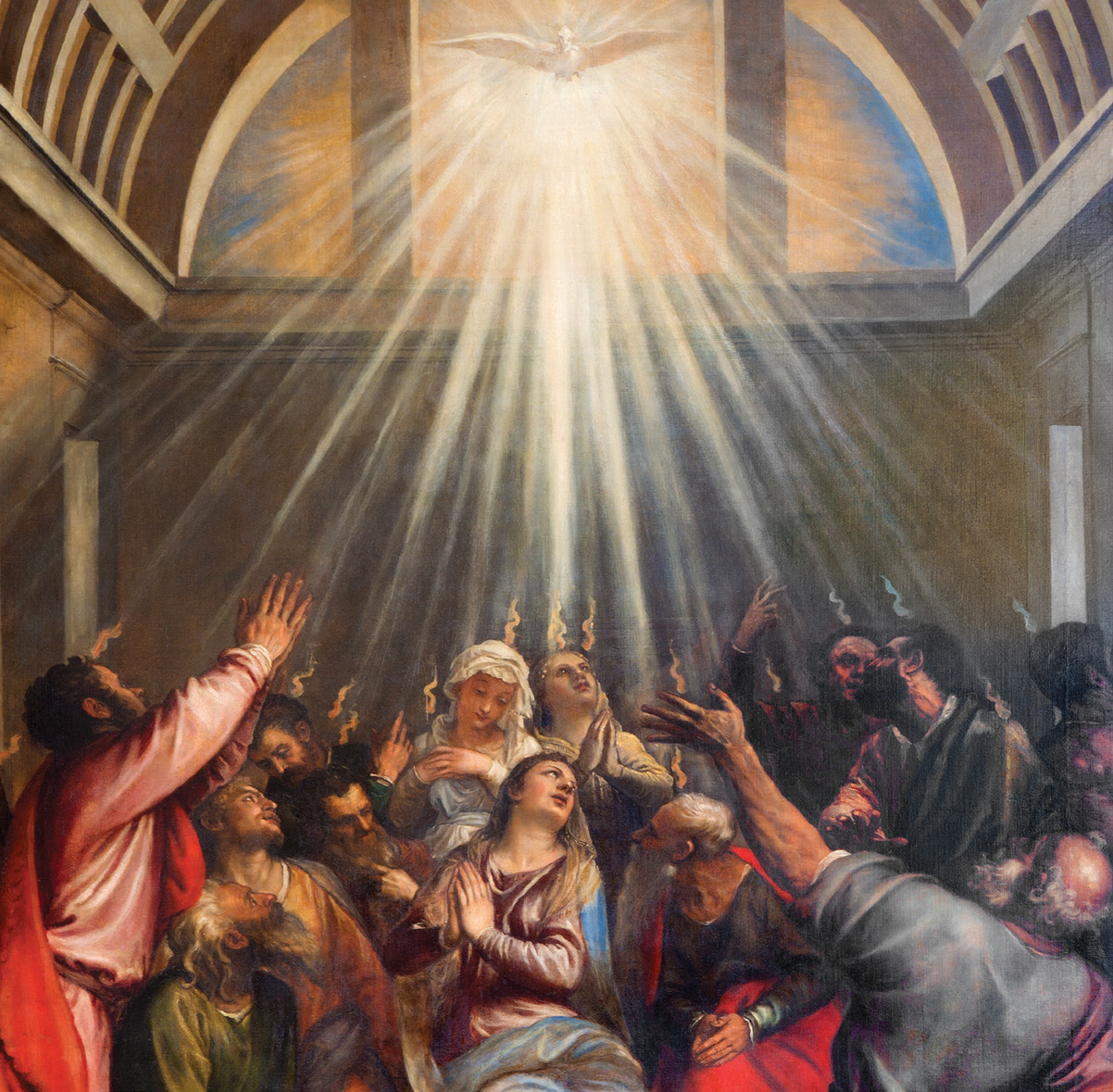 Theology 101 is taking a peek behind the scenes of some of the prominent figures, groups and events referenced in the New Testament. The goal is to provide a deeper context for the drama of salvation that sacred Scripture communicates to us.

When the time for Pentecost was fulfilled, they were all in one place together. And suddenly there came from the sky a noise like a strong driving wind, and it filled the entire house in which they were. Then there appeared to them tongues as of fire, which parted and came to rest on each one of them. And they were all filled with the holy Spirit and began to speak in different tongues, as the Spirit enabled them to proclaim. Now there were devout Jews from every nation under heaven staying in Jerusalem. At this sound, they gathered in a large crowd, but they were confused because each one heard them speaking in his own language … They were all astounded and bewildered. (Acts 2:1-7, 12)

The birth of the Church

This passage describes the descent of the Holy Spirit upon the Apostles in Jerusalem following the Death, Resurrection and Ascension of Christ. The outpouring of the Holy Spirit upon the Apostles emboldened and empowered them to proclaim the Gospel of the risen Christ. They immediately left the sanctuary of the Upper Room where they had been praying and went out into the streets of Jerusalem and began preaching to the crowds in the native languages of all who were present. They baptized about 3,000 people that day.

The Church had officially been born. According to the Catechism of the Catholic Church, “the Church was made manifest to the world on the day of Pentecost” as the gift of the Spirit ushered in a new era in the “‘dispensation of the mystery’—the age of the Church, during which Christ manifests, makes present and communicates His work of salvation through the liturgy of His Church, ‘until He comes.’” (1076)

We also learn from this passage that the Church’s feast of Pentecost takes its name from the Jewish Pentecost, or Shavuot, Shavuoth or Shabuoth. The Greek word “Pentecost” means “fiftieth.” Shavuot, which literally means “weeks,” is one of three biblically based pilgrimage days for the Jewish people. Traditionally, it required every Jewish male to proceed on foot to the Temple in Jerusalem seven weeks after Passover, or on the 50th day.

The holiday celebrates both thanksgiving for grain harvests and the giving of the law, or Torah, on Mount Sinai. In Jesus’ time, Jews from all over the Roman Empire would have attended this important festival. This gives important context to the account of the Apostles speaking to Jews from different regions and being heard in different languages in Acts.

In many ways, Shavuot exalts the values of love (and the sacrifice it is willing to make), perseverance in faith and mercy. We see these values manifested throughout the agricultural process that leads to the grain harvests celebrated by Shavuot. Likewise, Shavuot symbolizes the end of the seven weeks that Moses and the Israelites trekked in the desert before arriving at Mount Sinai, where Moses received God’s mercy in the giving of the Torah.

Another tradition associated with the celebration of Shavuot is the recounting of the story from the Book of Ruth. Elimelech and Naomi flee their home in Israel to escape a famine. Settling in Moab, Elimelech soon dies, leaving Naomi to raise their two sons. The sons marry two women from Moab—Orpah and Ruth. However, when both of Naomi’s sons die, she finds herself living with her two widowed daughters-in-law in a foreign country.

Unsurprisingly, Naomi makes the decision to leave Moab and return to Israel. She urges Orpah and Ruth to remain in Moab with their parents and remarry. Orpah eventually relents, but Ruth holds firm in her resolve to remain with Naomi out of love. She famously says, “Do not press me to go back and abandon you! Wherever you go, I will go, wherever you lodge, I will lodge. Your people shall be my people and your God, my God” (Ruth 1:16)

Ruth leaves behind everything to remain with Naomi and embraces Judaism. Eventually, Ruth marries a man named Boaz in Bethlehem. Their son, Obed, would become the grandfather of King David.In each instance, Shavuot reinforces the message that God blesses those who love, persevere in faithfulness and show mercy as these are the very qualities of God. It is a message that bears repeating today and every day.

Doug Culp is the CAO and secretary for pastoral life for the Diocese of Lexington, Kentucky. He holds an MA in theology from Catholic Theological Union in Chicago.
Published in the May/June 2022 issue of Catholic Life Magazine