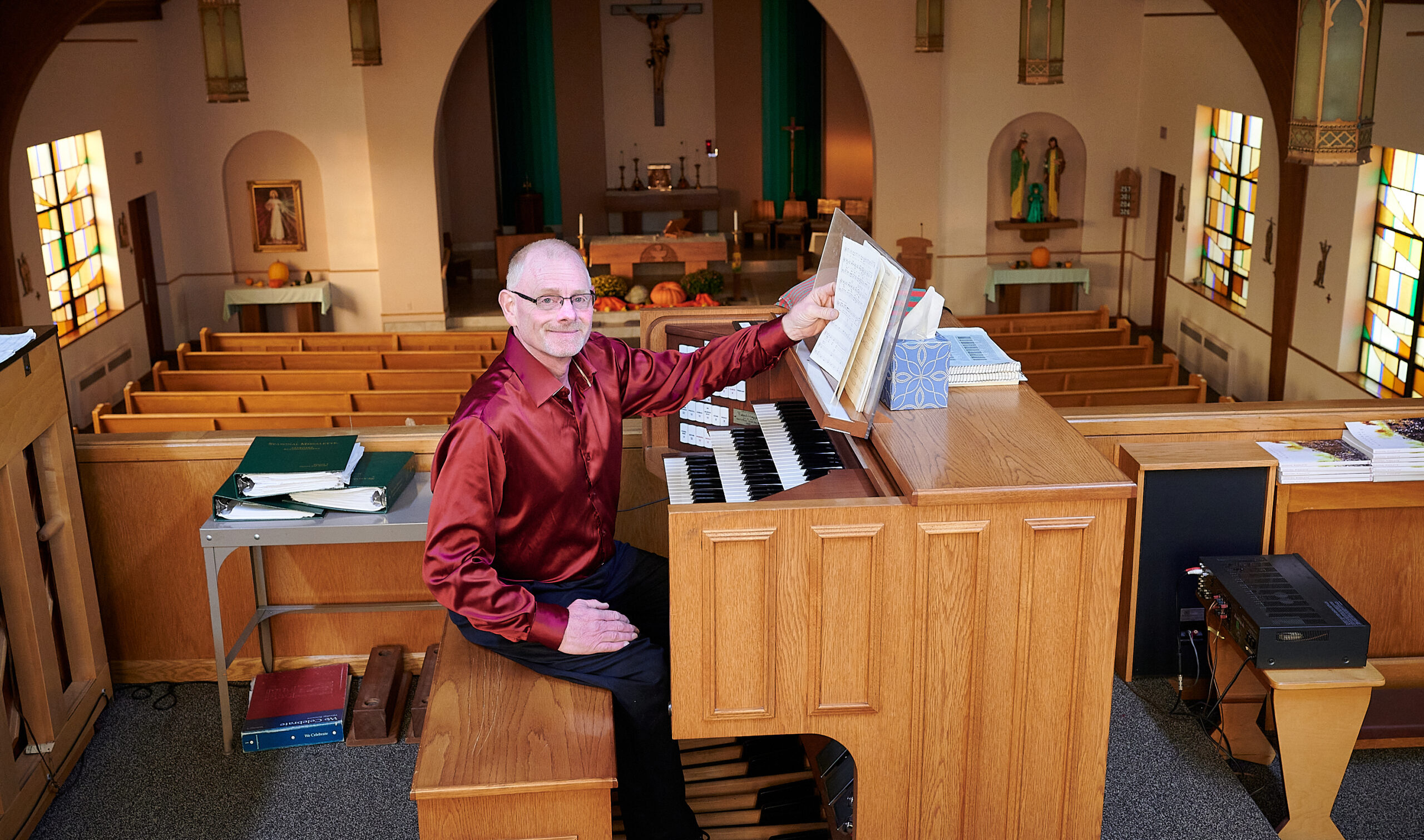 Phil Greschner loves music. He said, “Music was always of interest to me growing up in the Catholic Church. One of my greatest memories was always—and still is to this day—Christmas Eve Day. That day brought on the yearly tradition of visiting both sets of grandparents prior to midnight Mass on Christmas Eve at Holy Rosary Church. Our choir was so great to listen to as they did a half-hour program before the Mass. It was great sitting in the pew with my mom and dad (Lois and Stanley), my brothers and, not too far away, my grandparents, uncle, aunt and cousins, listening to the heavenly Christmas carols. Back then, I said to myself, ‘Someday, I am going to be in our church choir.’”

Young Phil’s dream of being in the church choir came true as a teenager. He would attend Mass every Sunday with his parents and his brothers. Phil and his brothers were altar servers throughout his grade school and high school years. During his freshman year in the mid-1970s, Pat Koplitz, the choir director, asked Phil to join the choir along with some of his other classmates. Phil said, “It was a great experience. I thought, ‘Someday, it would be great to direct the church choir.’ Not long after, in 1983, our choir director retired and our pastor, Father Richard Fliss, took me aside after Sunday Mass and asked if I would be interested in directing our choir. My heart leapt; I gladly accepted the volunteer position.”

During Phil’s early years of directing the choir, he was encouraged by his pastor. Father Fliss arranged for Phil to attend music workshops and even supported forming a polka choir in addition to the regular church choir. Phil said, “Members of the polka choir just wanted to sing God’s praises in a different way. We traveled during many summer and fall seasons, going to parishes throughout the diocese and even to Minnesota and Chicago. We were not looking for praise, but people could see the love we had for God in sharing this music ministry for more than 40 years. Father Steiner, Father Fliss’ successor, was a great champion of music and was also a great supporter of the polka choir, along with many of our other parish priests.”

Life was not without challenges for Phil. He enjoyed his life within the church. His parents and grandparents supported and encouraged him. Phil credits Father Fliss with not only getting him involved with music, but also in church maintenance and groundskeeping. But Phil remembers the time that tragedy entered his life: “When I was just 11, our dad was killed in a power take-off on the farm. Here we were, this beautiful family one day and the next devastated by our loss. At first, there was the anger that goes with the loss process, but then one day, Mom approached me and said, ‘God is good, He gave us dad, but he is now gone, and we have to have strong faith in Our Lord Jesus Christ to move on.’ From that day forward, I decided to dedicate my life and talents towards our church. After all, it was our community that packed the funeral home and church for the funeral. And so, I now felt it was my time to give back to God and become active in our parish and community, as they were our strength for us during the loss of our dad.”

Phil’s Faith and strong desire to continue to serve God and the Holy Rosary Parish family was instrumental in helping him overcome another challenge. This one, however, involved potentially losing his own life. An incident happened about 10 years ago, while he was taking down the Christmas lights strung outside on the church grounds. He said, “We had lights wrapped around our light poles and I climbed the ladder. As I got to the top, the ladder sunk into the ground on one side, which started tipping as I was coming back down. My foot got caught in the ladder and down I went and landed on my side on the rounded cement that supported the pole. I knew I was hurt, but just thought I was badly bruised. The next morning, I woke up and couldn’t talk. The ambulance was called. On the way to the hospital, the attendants knew I had broken ribs, but I was also told my right lung had collapsed.”

Phil spent all of January in the hospital because the lung was not healing. Eventually, he had to have lung surgery to stem an infection that developed. He was told the recovery would be painful. “I remember it very well. I was screaming in pain and begging God to take me home. I will never forget my mom and a couple of my closest friends, Julie Anderson and Jo Lulloff, standing at my bedside praying as the hospital attendants worked to control my pain. As I went through that whole month, I was so determined to survive and get back to church as soon as possible. I knew Holy Week was ahead of us and that I had to be there. Then I got a call from Dr. Brian Luckner from the Cathedral, who was arranging for members to sing for the Holy Thursday Chrism Mass. I told him what I was up against, but I told him, ‘I will be there.’ This was my determination to survive, to get back to church and friends in the community, doing my normal activities. God was gracious and merciful.”

When thinking about ministries, Phil said he has always been drawn to St. Mother Teresa of Calcutta because of how dedicated she was in helping the poor. In fact, prior to his accident, and under the inspiration of St. Teresa, he made plans to visit India at the invitation of Father Ben Franklin and Father Nathan, both of whom have families in India. But, because of the accident, he had to delay going for a year. Phil’s visit to India was a transformative experience for him. He visited beautiful shrines and Hindu temples and was impressed by the hard labor required in their construction. He was also made consciously aware how little food is wasted in India compared to his experiences here at home, especially in restaurants and schools.

Most of all, Phil was taken with the people who he said were loving and friendly. “I had this yearning in my heart for these people and they wanted me to come back. Two years later, I went back for a two-week visit. These two experiences changed my life. I am grateful to God every day for the loving church family and the Owen-Withee Community in which I live.”

These two life-changing experiences cemented Phil’s strong desire to serve Holy Rosary Parish and the community of Owen. At the recommendation of Father Al Jakubowski, Phil completed the two-year lay ministry program, followed by the Leader of Prayer. He also completed the “Next Step Program,” a joint program of the Diocese of La Crosse and Viterbo College that prepares people to minister effectively in parishes. Phil said, “The thing I like best about my ministry in our church is just working with everyone in our parish. Everyone works together so well. There’s not really one that stands out from the other. We work together as a parish family, which is the beauty of watching it all happen.” Phil said one of his favorite ministries is singing in the Diocesan Chorale for special events like the Chrism Mass and ordinations.

Above all ministries, music holds a special place in Phil’s heart. One cannot help but remember Pope Pius X’s call for sacred music in the liturgy to possess three characteristics: beauty, holiness and universality. Pope Francis recently emphasized these thoughts by remarking, “Not just any music, but holy music, because rituals are holy; endowed with the nobility of art, because God must be given the best; universal, so that everyone can understand and celebrate. Above all, clearly distinct and different from that used for other purposes.” Phil lives these words by giving his music and other ministerial talents to help the people of Holy Rosary Parish in Owen celebrate the goodness of God.