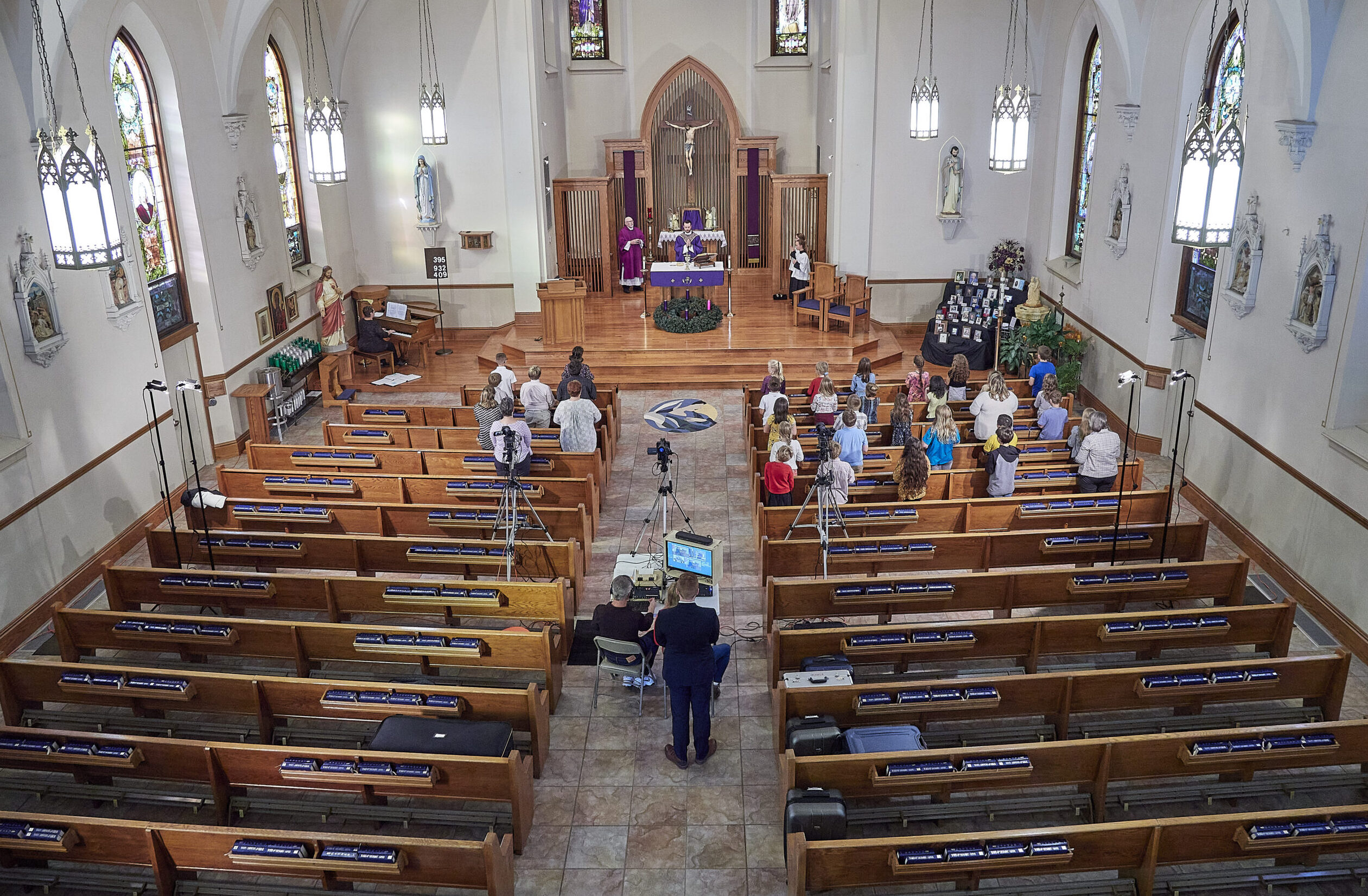 Mary is 85. She lives alone with her two cats as companions. She no longer drives and walking has become challenging for her. She used to attend Sunday Mass at her parish, rarely missing and, the times she did, it was usually because of illness. Now attending Mass in person has become more difficult for Mary because of her mobility issues. Occasionally, a parishioner will stop by and pick her up for Sunday Mass. Other parishioners, who are part of her parish’s homebound ministry program, will bring Mary holy Communion. Mary is thankful and appreciative of the support she receives from her parish community.

On Sundays, when Mary is not able to attend holy Mass in person, she turns on her TV and watches Mass broadcast by the Diocese of La Crosse on her local TV station. Others will watch Mass using their computer, tablet or phone. Mary said, “I would rather be at Mass [in person], but since I can’t, being able to watch Mass at home is the next best thing—it’s important for my spiritual well-being, and it helps me stay connected to my Catholic Faith. I am so thankful for the Diocese of La Crosse and the many people who are part of this ministry.”

The televised Mass is a ministry of the Diocese of La Crosse. It’s intended for sick or homebound parishioners who are unable to attend Sunday Mass in their own church. This has become a particularly relevant ministry considering the health concerns brought about by COVID-19.

Close to 850 Masses have been broadcast throughout the diocese since the inception of this program.

Initially started many years ago as a diocesan outreach ministry, later replaced with national broadcasts, it was not until June 2005 that Bishop Listecki instituted the TV Mass ministry in its present form. Since then, parishes and groups throughout the diocese have served as liturgical ministers, musicians and participants for these Masses. Close to 850 Masses have been broadcast throughout the diocese since the inception of this program.

Producing a televised Mass requires careful planning and preparation, usually weeks in advance of the actual broadcast dates. The Office for Sacred Worship contacts groups or parishes, asking them to host a Mass in their own church or chapel. Or groups will travel to another location, such as Christ the King Chapel in La Crosse, where more than half of the Masses are celebrated.

On a given recording date, usually four Masses are celebrated, one for each of the Sundays of the upcoming month. This is done to take advantage of the significant time it takes to set up and take down the lights, cameras and sound equipment needed for recording.

The recordings are done by La Crosse Digital Media. Fred Wuensch, owner, has produced the TV Masses since 2005. Prior to the scheduled recording session, Fred and assistant(s) arrive on location hours beforehand to set up the equipment—video cameras, recorders, monitors, microphones, etc.—and tests the set-up to make sure everything is operational before Mass begins. When the recording is finished, the equipment is taken down and packed away. Then Fred captions, edits and uploads the finished recording to an online location, where local stations can download the file and prepare to broadcast the Mass on a given Sunday.

Just prior to recording a Mass, Luke Zoroufy, master of pontifical ceremonies, explains to those attending what to expect during the recording and makes sure everything is in its right place, participants know what to do and the decor is liturgically correct. “Since we may record Masses during a different liturgical season than what is current, we need to change the decorations to match the season we are recording,” said Luke. For example, Masses for Advent are recorded during Ordinary Time, so the advent wreath will need to be set up and the liturgical colors will be violet.

“It takes about a dozen people at a minimum to produce a video,” said Chris Carstens, director of the Office for Sacred Worship. “There are two videographers, producers, a priest, servers, musicians, lector, director and congregation members. People who participate in the Mass usually come from the place that is used for the recordings.” Luke said, “There are a few factors that go into deciding the location of the TV Masses. We like to be able to travel around the diocese so that those who watch the Masses can see the different churches of the diocese. It is also important that the church is big enough to hold the equipment needed to record the Masses. Other factors include available priests and deacons, as well as if there is a school associated with the parish.”

“One of the challenges in producing a video to be aired on TV is fitting all of the liturgical elements of a Sunday Mass in only 28 minutes. The homily is restricted to three minutes and the ministers need to be prepared for what is next so that time limits are met. While keeping all of this in mind, it is important to maintain the integrity of the liturgy and that all those participating can remain prayerful,” said Luke.

Usually, everything goes smoothly and retakes are uncommon. “On only a few occasions have we had to stop the recording, pause and then restart, such as when a piece of equipment stops working. Once a homilist grabbed the wrong text of a homily. Sometimes, the real-time celebrations exceed 28 minutes and parts of the entrance or communion processions need cutting,” said Chris.

In addition to producing Sunday Masses for TV airing, Masses are recorded for special feast days. “Bishop Callahan schedules time to record the Masses for Christmas, the Solemnity of the Holy Family, Palm Sunday and Easter Sunday,” said Luke. “It is a joy to work with his excellency and we are blessed to have him take part in this ministry. The TV Masses are such an important ministry and I love that I get to be a part of this great work to connect the homebound to the liturgy. It is also a blessing for me to travel to the parishes in the diocese and work with all the different people who make up the diocese.”

Chris also reflected on the importance of the Televised Mass Ministry, especially recently. “The TV Mass has really shown its worth over the past few years during the pandemic. We’ve asked our broadcasters to estimate how many households tune in the Masses each weekend, and this number has increased from an estimated 10,000 from before the pandemic to nearly 30,000 today. Many thanks go out to those who help us celebrate, record, broadcast and fund this important work!”

Mary is just one of many people across the Diocese of La Crosse, which covers 19 counties of west-central Wisconsin, who are sick or otherwise homebound and unable to be at their home parish to celebrate Mass. The Televised Mass Ministry provides a vital link for people like Mary to maintain their connection with the Catholic community and their Faith. And like Mary, they are extremely grateful for this ministry and the people involved in it.