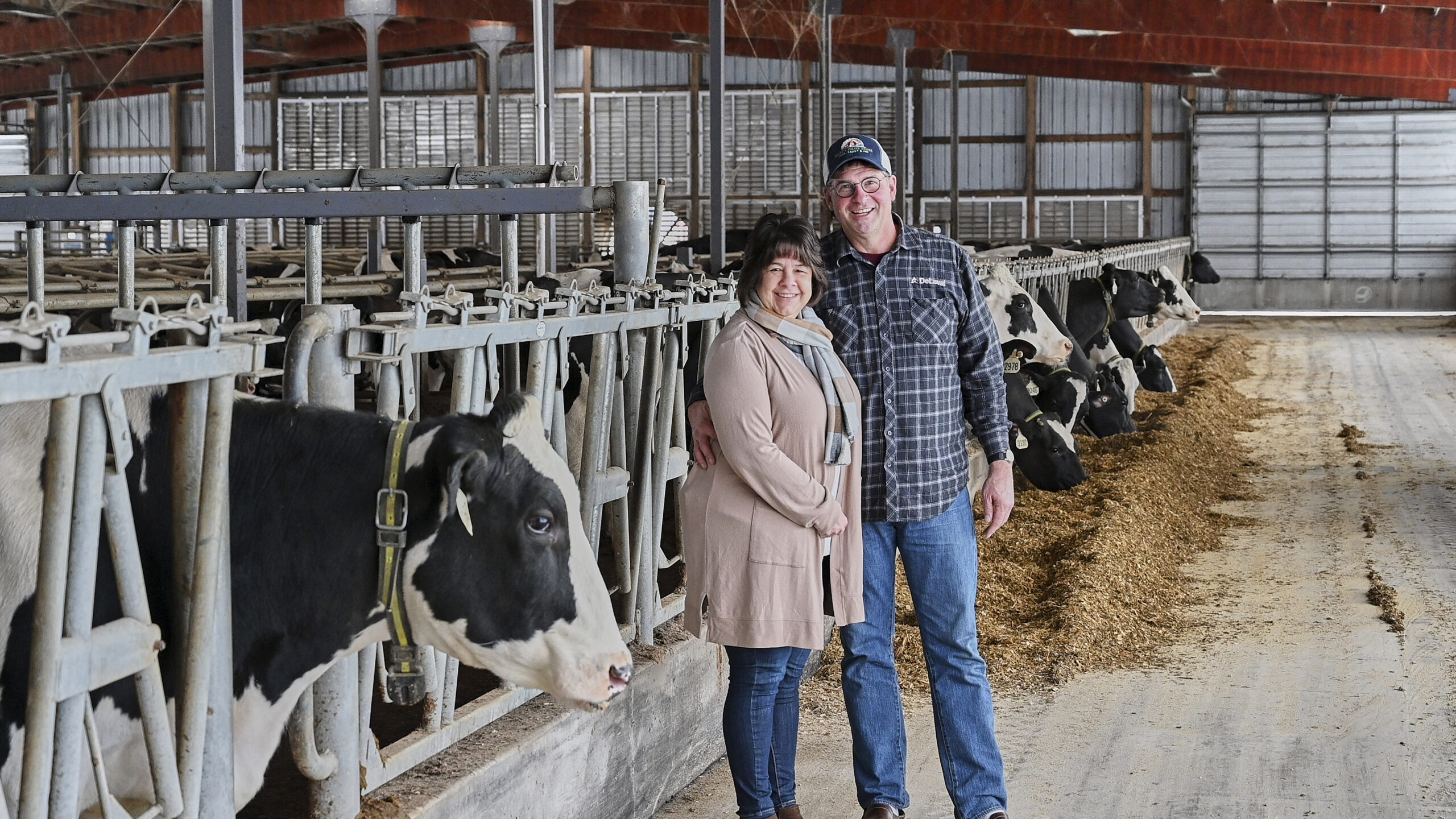 “I really think that God made me to be a farmer,” Ken said. Ken and Jackie (Jacquelyn) Feltz own the Feltz Family Farms and Dairy Store on Porter Drive in Stevens Point. They are active parishioners of St. Bronislava Parish in Plover.

As to why Ken thinks God’s plan for him was to farm and be a steward of the land, he said, “It’s the only thing that I have really been good at.” Glancing over at her husband, Jackie said, “Don’t say that,” knowingly and perhaps unconsciously expressing the modest and unassuming nature of her husband.

Ken continued, “It is the only thing that comes naturally to me. I just love my job. I love what I do. And the thing is, I feel God has blessed us so very much. When times were rough and I did not think we were going to make it, God was, and continues to be, very generous to us. That is why we try to give back and support our parish community in thanksgiving.” Jackie added, “St. Bronislava Parish is really family to us.”

Ken is a fifth-generation farmer. He has lived all his life within a half-mile radius on the same road where he grew up. Jackie grew up in Rudolph about 20 miles to the west of the Feltz Dairy Store. They met each other on a blind date arranged by friends and eventually were married at St. Bronislava Church.

I think St. Brons is really like a family to us. The closest people that we have in our lives are people who we’ve met there.

Ken purchased the farm from his family in 1993. Ken said, “We had 50 cows, a large garden and a bunch of chickens. The whole thing was kind of a subsistence farm, so to speak. It was a lifestyle back then in ‘93 when we bought it. Jackie was not from a farm and had no farm experience. She worked at a bank at that time.”

The early years on the farm were not easy for the Feltzes even though they appreciated the lifestyle rural living can offer. Jackie’s income from her job at the bank kept the farm going for the first few years. “Financially, milking 50 cows is not very good,” said Ken. “There was an incredible amount of physical labor milking 50 cows twice a day, seven days a week, with occasionally only a few days off. I would start early in the morning milking cows, then I would watch the kids when Jackie went to work and then I would take them to daycare. It was a very stressful time.”

Eventually, things turned around and life on the farm became less stressful. “The biggest change was for us to treat the farm as a business rather than a lifestyle,” Ken said. “Another significant decision was to focus only on cows, rather than a multitude of other farm products like green beans or sweet corn.”

The change in treating the farm as a business resulted in increasing the dairy herd from 50 cows in 1993 to 750 today. By keeping debt low and expanding their operation as finances allowed, Ken and Jackie found the recipe for their success.

Jackie had a vision for some time regarding a dairy store and when they decided to install robotic milkers, she thought that seemed like the perfect opportunity to build the store. Her vision became reality in 2017. The store even has viewing windows into the robot barn so that customers would be able to watch the robots in action. Another important factor in the decision to build the store was that each of their children was interested in working for the family business. Their oldest son Jared is the herdsman for the farm and their daughter Taryn and youngest son Jake help manage the store. Jackie and Ken said, “We knew with our children’s commitment it could be successful.”

Modernization and technology improvements have eased the strenuous manual labor and constant attention required of dairy farming to allow more time for enjoying family life. Jackie said, “I think St. Brons is really like a family to us. The closest people that we have in our lives are people who we’ve met there. There are three other couples we do a lot of things with. We are at a point in our lives when our children can look after the farm so we can have some time off.”

“We usually go to 8 a.m. Mass with all our kids and grandkids,” Jackie said. “This is something we are proud of. I really like being in church. I want to be there. Being there just makes me feel good. I like the atmosphere, the peacefulness. This is important to me.”

Ken and Jackie enjoy helping with events and programs at St. Bronislava Parish and volunteer their time when they can. Ken ushers at Mass, both Ken and Jackie are greeters and they help with the annual parish festival.

Jackie and Ken are especially proud of their children. Their two daughters-in-law, Jenna and Amanda, teach in the Pacelli Catholic School system. They are happy that their children are following their parents in the dairy business. Ken said, “I never expected our sons to remain on the farm. But we always knew that Jared would from the time he was 4 years old. He knew he wanted to be a farmer. He always wanted to be outside, driving something, being with his dad.” “However,” Jackie added, “we never pushed them to stay on to help Dad run the farm.”

Ken recalled times when he would be on the tractor working in the fields and having a conversation with God—praying—thanking Him for the many blessings that he and his family have received. Even in giving thanks for finding a small tractor part lost in a huge field and not knowing where to start looking for it, only to locate it a few feet from where he was standing.

Ken and Jackie summarized their lives’ experience by saying, “You must have faith in God. You need to let Him into your heart and soul and put your trust in Him and experience His love. It is a blessing.”