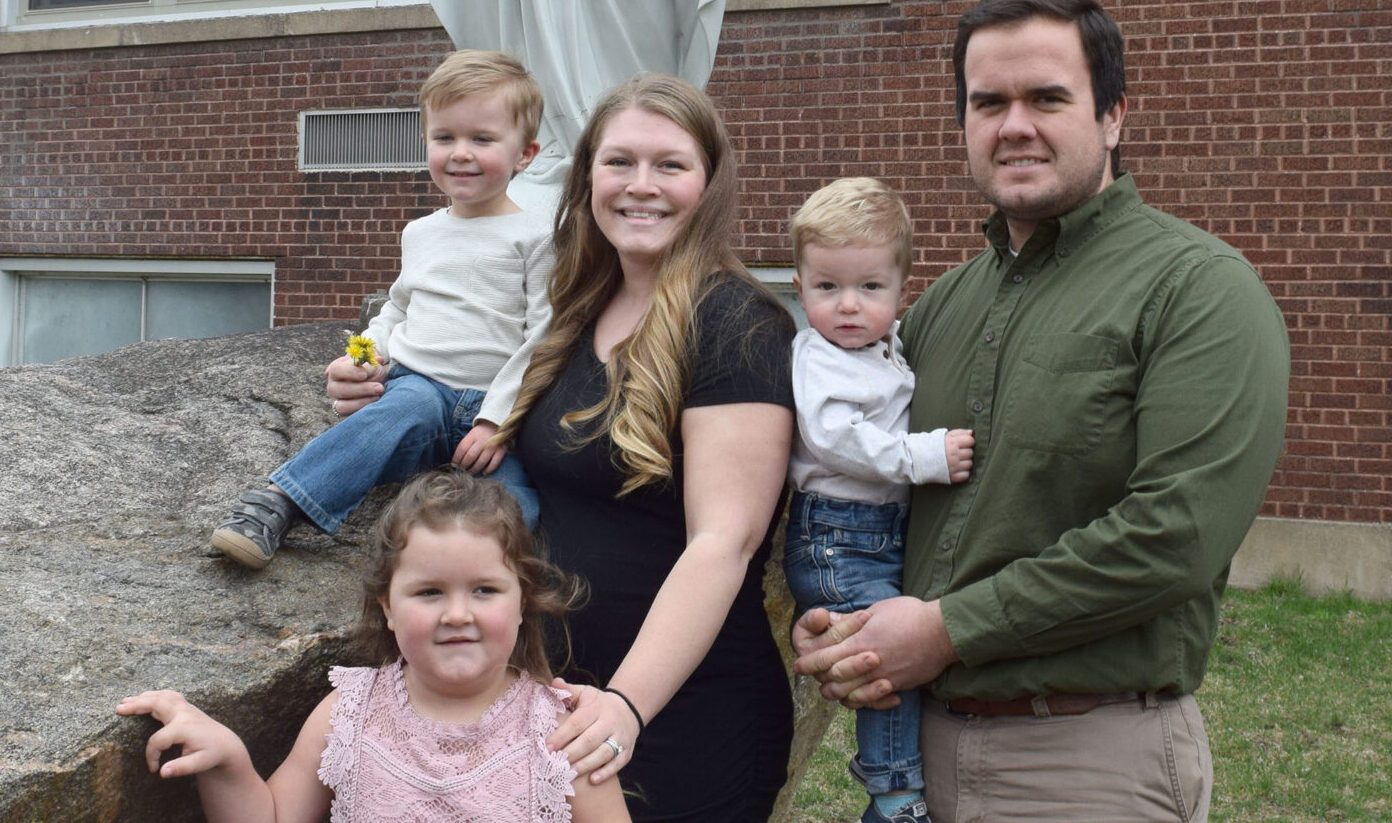 Ian and Kayla Leavitt of Holy Family Parish in Arcadia met in 2011 during their freshman year of college at UW-Stout. Ian had been recruited to play football, and one of the team’s responsibilities was to help move freshmen into the dorms. To make the task more exciting, Ian and a couple friends had a plan: keep track of the room numbers of the girls who seemed interesting and who they may want to meet. Ian ended up helping Kayla and her family move her in. Kayla’s number happened to be the first on his list. When Ian and a friend stopped by to visit Kayla and her roommate during the first week of school, they were invited right in and ended up staying for hours. Ian never stopped by any of the other girls’ rooms, and he and Kayla began dating the following month.

Ian transferred to Chippewa Valley Technical School the following year and graduated with a degree in agronomy. Kayla transferred to Winona to earn a nursing degree. Through these transitions, the couple remained together, experiencing college life and the usual worldly pleasures and temptations.

In 2016, Ian and Kayla were married at Holy Family Church in Arcadia, settling there in Ian’s hometown. They welcomed a daughter, Lyla, the following year. Lyla’s birth had Ian and Kayla struggling to figure out what they wanted their family’s Faith life to look like. They knew they were now no longer living just for themselves. “There came a crossroads for Ian and I,” Kayla shares. “He was raised ‘super Catholic,’ and I was not. And I had so many questions.”

Kayla was raised in the Methodist tradition and was extremely involved in youth group, Sunday school and mission trips. It was difficult for her to imagine becoming Catholic or raising her kids in a faith that she didn’t understand.

“I was raised Catholic by default,” Ian adds. “I wasn’t able to defend my Faith, and I wasn’t even 100% sure why I was Catholic … I definitely drifted, but I never renounced my Faith.”

“I didn’t exactly have the answers,” Ian admits. “I wasn’t really living it and was put on the spot.” Still, Kayla’s family admired Ian’s commitment to always attending Mass during their dating years, even after weekends spent drinking. But even Ian’s Mass attendance became sporadic as the young married couple tried to make a decision for their family. Ian calls it “the dark before the dawn.” For a time, the faith choice the Leavitts made was just not to choose.

In January 2019, Ian had a major turning point. “I’ll never forget it. I was standing in our downstairs bathroom looking in the mirror. I had just gotten off the phone with my best buddy. We decided that we were going out west hunting for mule deer, something I’ve always wanted to do. I’m standing there, 360 lbs., on the borderline for everything—the blood pressure, the cholesterol—at 25 years old, and I’m thinking to myself, ‘Are you serious? What are you doing here? What’s your plan? This is supposed to be your prime.’ I was looking in the mirror. I was like, ‘You are horribly unhappy. What does it take to get happy?’” Ian had just recently quit drinking after years of alcohol abuse, and he knew that had not been the answer.

He continued the thought, “There’s no pill to take for happy. All these other fleeting pleasurable things you’re engaging in, they’re empty. There’s no happiness in that, so you can check off all those. That’s not where happiness is found.”

“So, I got on this path of self-mastery, and from that moment forward I never looked back,” Ian says.

Ian was particularly inspired by the stories of Navy Seals like David Goggins. He started walking, eating healthy, waking earlier and reading. He came to realize that we are all defined by our habits. “I really sought to identify all the bad habits I had, shine the spotlight on them, rip them out and replace them with a good habit,” he explains.

“Kayla was always by my side, no matter how horrible I was to live with,” Ian shares. The family began attending Mass regularly as Ian’s Faith grew. Kayla was inspired by her husband’s journey and started making spiritual changes herself.

“ I REALLY SOUGHT TO IDENTIFY ALL THE BAD HABITS I HAD, SHINE THE SPOTLIGHT ON THEM, RIP THEM OUT AND REPLACE THEM WITH A GOOD HABIT. ” -IAN

Holy Family priests Father Sebastian Kolodziejczyk and Father Kyle Laylan spoke in their homilies of the importance of caring for our physical health and the equally important, and often neglected, care of our spiritual health. “How are you feeding your spiritual health?” they’d ask. Kayla took that question to heart. Part of her discernment was also looking at her notions of the Church: “I found so much hypocrisy in the Catholic Church, but I realized that I didn’t have to be a hypocrite. I could live my Faith and be the Catholic I believe you should be.” In 2020, she decided she would enter the Church.

With Ian as her sponsor, the couple met with Father Sebastian for weekly meetings, filling the catechetical gaps and asking all the hard questions. They are so grateful for the patience and steadfastness of their priests in fielding all their inquiries as they grew in their knowledge and love of the Church. At the Easter Vigil in 2021, Kayla entered into full communion with the Catholic Church with Ian at her side.

“We have the fire, that’s for sure!” Kayla laughs, knowing that their journey has just begun. Embracing the Faith has entirely transformed this family. Every area of their life has been touched and re-focused. It is hard not to notice and even more difficult not to be moved by their infectious enthusiasm.

“We went from partying all the time—the downtown scene—to people seeing us and [they] can tell that everything about us has changed,” Ian comments. “My favorite part is just the reactions you get out of people, sharing my story and just seeing the look on people’s faces, like, ‘wow, he really found something!’”

Family life has taken on great priority with their Faith renewal. Ian recalls, “Another big turning point was when I really leaned into my vocation as a father. This is how I change the world. Everyone wants to change the world. My children are how I do it.” Ian works as the general manager of a local farm supply store in Arcadia. He feels blessed to be a part of a three-generation, Catholic, family-owned business. Kayla, after working many years in mental health, recently accepted a casual, on-call RN position. Their family has grown to include 3-year-old James, and 1-year-old Gabriel, joining big sister Lyla, now 5. They’re expecting their fourth child this October.

“Our goal in life—everything that we are trying to navigate our life towards—is spending more time as a family,” Kayla shares. They enjoy hiking, fishing, camping, cooking, praying, property investment and improvement, anything that will bring them together.

The couple has one project they hold especially dear. Standing just a mile from the Leavitt’s home, there was something about the church used by the suppressed St. Michael Parish that always drew their attention as they’d ride by on their way into town. Last September, the Leavitts volunteered to clean and prepare the building for the annual Feast of the Archangels Mass, the only event held there each year. People took notice of the diamond in the rough, and felt the renewed energy of the little church. With the Holy Spirit’s prompting and the Leavitt’s willingness to do the leg work, First Saturday Devotion Masses are now scheduled at St. Michael’s every month.

“For a church that was flat-line dead—now it has a little pulse to it,” Ian beams. Along with the growing First Saturday Mass, the Leavitts have organized a St. Michael family night each month in an effort to build a vibrant Catholic community, something they very much long for.

“We feel so called to reach out to other young families who were maybe where we were a couple years ago,” Kayla says. “We’d love to get them back to Mass or get them to Mass.”

At Holy Family, Ian teaches seventh and eighth grade CCD and is a lector. As he ministers to his parish, especially during Mass, he fondly remembers serving—especially funerals—as a child and learning the details of the liturgy from Father Michael Klos. Learning about the liturgy is something that continues to fascinate Ian, especially over the last year as he and his family have visited over two dozen parishes, experiencing all types of Masses. “The more traditional the Mass, the more packed it is with young families,” he shares. Like a growing number of young families, these traditional forms and elements of the Mass appeal to the Leavitts. “The beauty and otherworldliness call us to give our best.”

Looking back on his journey, Ian shares: “I came to realize that the problems I had with the Catholic Church were my problems. It was my inability to align my disoriented life and priorities with the Church.” Leaving all that behind, the Leavitts try to live as counter cultural examples in the world from whose hold they broke free. “Everything else is fallen away. Our life is now nothing more and nothing less than drawing more people to Christ.”