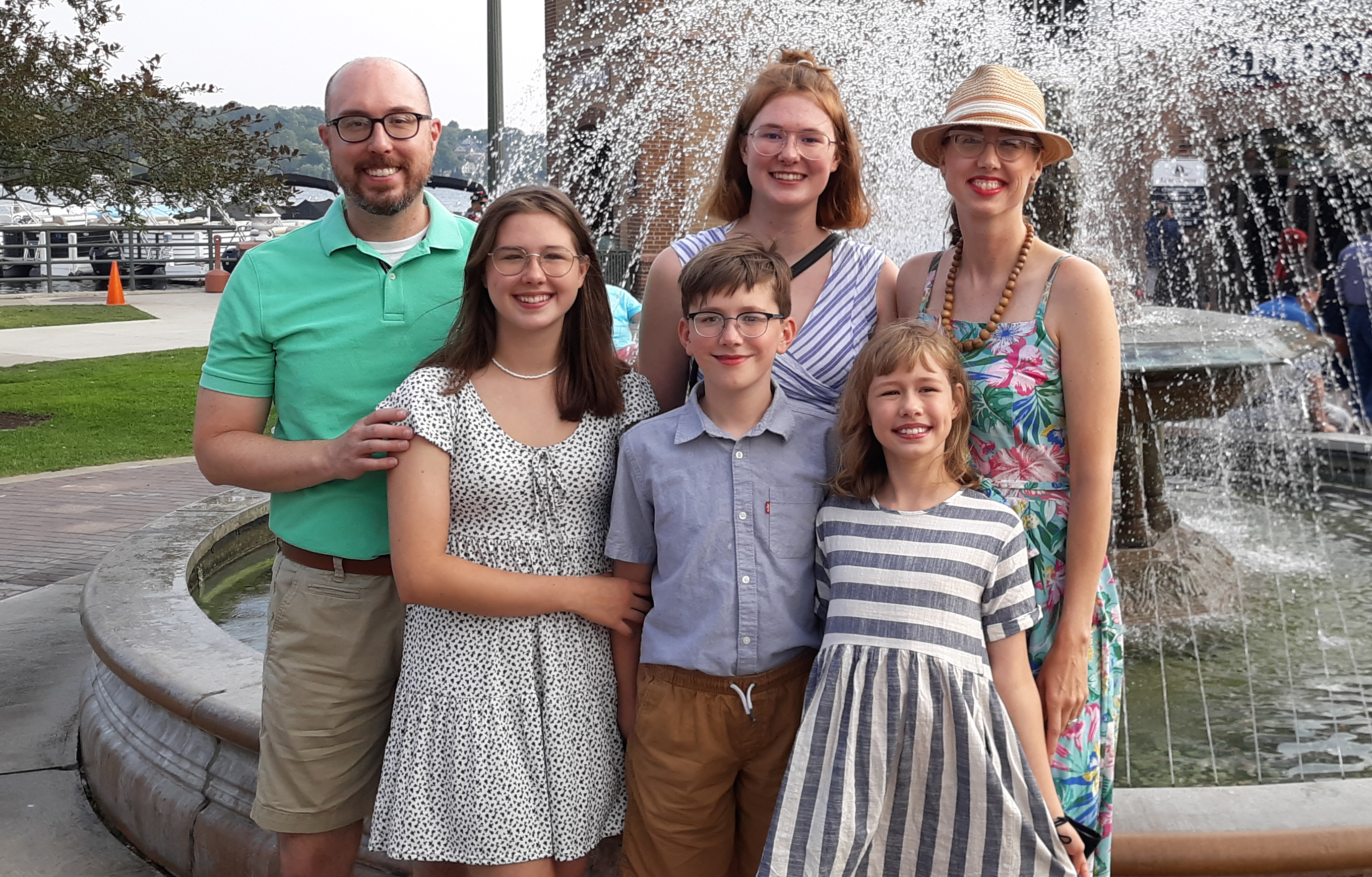 After our engagement, we met with our pastor and reviewed what we needed to do before our wedding in June of 2001. We completed the preparation requirements several months before our marriage; we took the Facilitating Open Couple Communication, Understanding and Study (FOCCUS) survey, met with a sponsor couple and checked all the boxes. Our parish priest strongly encouraged our group to complete a course in Natural Family Planning (NFP), however, not being part of our requirements, we didn’t receive any information about it. Because Eric and I had no experience with anything concerning our reproductive plans, this seemed like a great idea. We didn’t feel the need to use artificial means or products because we casually accepted that after our wedding, children would be the next step. Back then, there were no local NFP offerings and no online programs as there are today.

By the time I looked into classes, I learned the nearest offering was more than an hour away and it would take several sessions to complete. Our wedding was about two months away, and we were graduating from college in a month and waist deep in wedding plans. Our part-time jobs consumed our evenings and weekends. We just didn’t have time to drive back and forth to learn NFP!

Fast forward a year. Perhaps we should have gotten pregnant, but we didn’t. We were living in Sheboygan. Eric worked in IT at a local insurance company while I looked for work. For some reason, perhaps because of the 9/11 attacks or our recent move, I couldn’t find a job—not as a bank teller or even as a sales clerk. I submitted countless job applications and resumes but had only a handful of short interviews. I had all the time in the world to keep house, perfect my Boston cream pie and make goat-cheese stuffed chicken breasts for dinner!

Eric had his new job and was trying to find his place, while I was trying to find any place. We supported and clung to each other. I had been unemployed for nearly a year when I finally was offered an assistant marketing job at a family-owned manufacturing company. I didn’t even mind the one-hour commute each day. It was there, in this little run-down loft office as I worked alongside a female graphic designer where I was introduced to NFP. Through typical office conversation, she revealed that she and her husband were members of the Couple to Couple League, and she led an adamant organic, natural lifestyle.

She was about to have her first baby, and she talked about NFP. She suggested I go online and order a book titled “The Art of Natural Family Planning.” She made NFP sound doable, and I liked the idea of learning it myself. We knew artificial methods were against Church teaching, but we felt that NFP was an unspoken secret and inaccessible. With this new idea of teaching myself, I bought the book and eagerly read the table of contents. I started with “Basic Fertility Data” on page 87. After reading about my cycles and learning exactly when fertility happens, I was alarmed to tell my husband that I thought I had misunderstood my own fertility! Why hadn’t they taught us this critical information in sex ed? Did they teach it, but I wasn’t listening?

I grew up in a typical practicing Catholic home. We regularly participated in the sacraments and attended Mass every Sunday and on holy days. I knew all the commandments and sins, and I knew what thoughts and actions sent you straight to hell. My siblings and I were reminded that sex was only for marriage. So when I got married, I was a little scared, but I don’t think I realized it until I was faced with this wonderful dilemma. I loved my husband and was attracted to him in all ways, but there was always a distant twinge of guilt because for so many years, I equated sex with being bad.

My husband also grew up Catholic. He received the sacraments and attended Mass. He was taught and knew the same morality that I did. But perhaps because he is male, his experience was different and quite opposite to mine. He also was well aware that the fruit was forbidden before marriage, but outward visual temptations were too much. He had a different struggle and perhaps, although he was honest with me, he thought that being married would “fix” it as our desires could be freely met whenever they arose. We both learned that the reality of marriage is not so. We both had a sort of brokenness that marriage alone would not fix, but with God in our marriage, we were healed.

Learning and practicing NFP was eye-opening, liberating and empowering for both of us. In the Catholic Faith, NFP and Theology of the Body are practically one and the same. By learning NFP, I was simultaneously drawn to the principles of Theology of the Body. I have learned and continue to learn the purpose of the body and the purpose of marriage.

Knowing how my fertility works empowered me and gave both of us confidence that we could practice it successfully and in accordance with our Catholic Faith. NFP is a total gift of oneself to the other; nothing is withheld. Even my fertility is a piece of myself that I do not protect or withhold from Eric, and he does not refrain from giving me any gift of himself. And the possibility of creating a new life is the inclusive relationship accepting God and allowing God to have a participatory role in our marriage. I don’t know why we didn’t become pregnant when we were first married, but when we practiced NFP correctly, we became pregnant the second month after we began planning to achieve pregnancy instead of avoiding it.

From that point on, we’ve been able to space our children, grow our family and postpone pregnancy for various reasons.

But it wasn’t all a bed of roses. Through our NFP journey, there was a point just before our second daughter’s first birthday when I found I was pregnant again. This was slightly surprising to me because, according to my notes and following NFP basics, I thought I was in a phase of infertility. But the stick said I was pregnant—and I felt pregnant.

I was stressed because this was not part of my plan, but I had to face reality. Right before my first appointment, I tried to change my feelings in order to make the best of the situation. I reasoned that somehow this would work out, and I would be able to manage it all. But this was not to be either. At our first appointment, there was no heartbeat. The little fetus was visible, looking only like a tiny loaf of bread dough curled in a crescent roll shape but it had no sign of life. A new reality set in and a dark cloud of sadness and guilt loomed over me for almost a year. My emotions rose and fell in a self-blaming way.

Early in our NFP journey, I had reveled in the feeling of total control. I somehow thought I could manage my fertility and family plans naturally with 100 percent control and that nothing would go “wrong.” Through much prayer and contemplation, the lesson I learned from this experience was that I needed to trust in God. In my surrendering back to God, the quiet message He gave me was that a baby takes nine months to come into this world. By that time, my one-year-old would almost be two and things would be a little easier. It would have been hard to have another baby so close in age, but my husband is a great hands-on dad and surely my extended family and friends, even neighbors, would have helped in ways big and small. I wished I would have thought of all these positive benefits instead of feeling weighed down by my own selfish ones. I learned not to cling so tightly to my own sense of control.

Now we’re both 43, and I particularly feel like we have a good balance of time and love and devotion and discipline to give to each of our children.

We still practice NFP to avoid pregnancy. But I learned not to be so controlling, not to be so afraid. If we would have a baby now, it would take nine months, and that’s plenty of time for planning and stocking up on supplies. My children are older now, and they would love to have a baby to care for—I’m not sure I’d have to do much of anything baby-related with so many helpers around! So far my cycles and fertility have been consistent enough that following the most basic concepts of NFP has been working. But I realize that soon things will change as I age and approach premenopause. There’s a chapter in the book for that too. I’m confident this information will be of immense help as my fertility changes, and I will continue to allow God to be an active voice in our Faith journey as well as our married life.

Through all these decades of highs and lows, Eric and I have been able to practice patience and respect toward each other’s feelings, offer safety and warmth during times of sadness or despair, and accept comfort and provide strength and encouragement. But there are also small times of pride, anger and resentment. Those times fade faster when we surrender those feelings in prayer and reconciliation. Each day, each week, and each month our lives are a living choice to continue our walk in Faith practiced and lived out. It is not easy. But there is much joy when we allow the grace of God to flow through us, accepting His goodness and trusting in Him. When we fall, as we all do, we can go back to Him in prayer and reconciliation to get back on the track to holiness. Eric and I made a commitment by the marriage sacrament to work to get each other to heaven. We both agree that we’re not the same people we were when we first got married. We’ve grown in so many ways, closer to each other and closer to God. We hope in the next 10 years, that we can say again, that we’re not the same people we were 10 years ago. We want to keep growing closer to God.