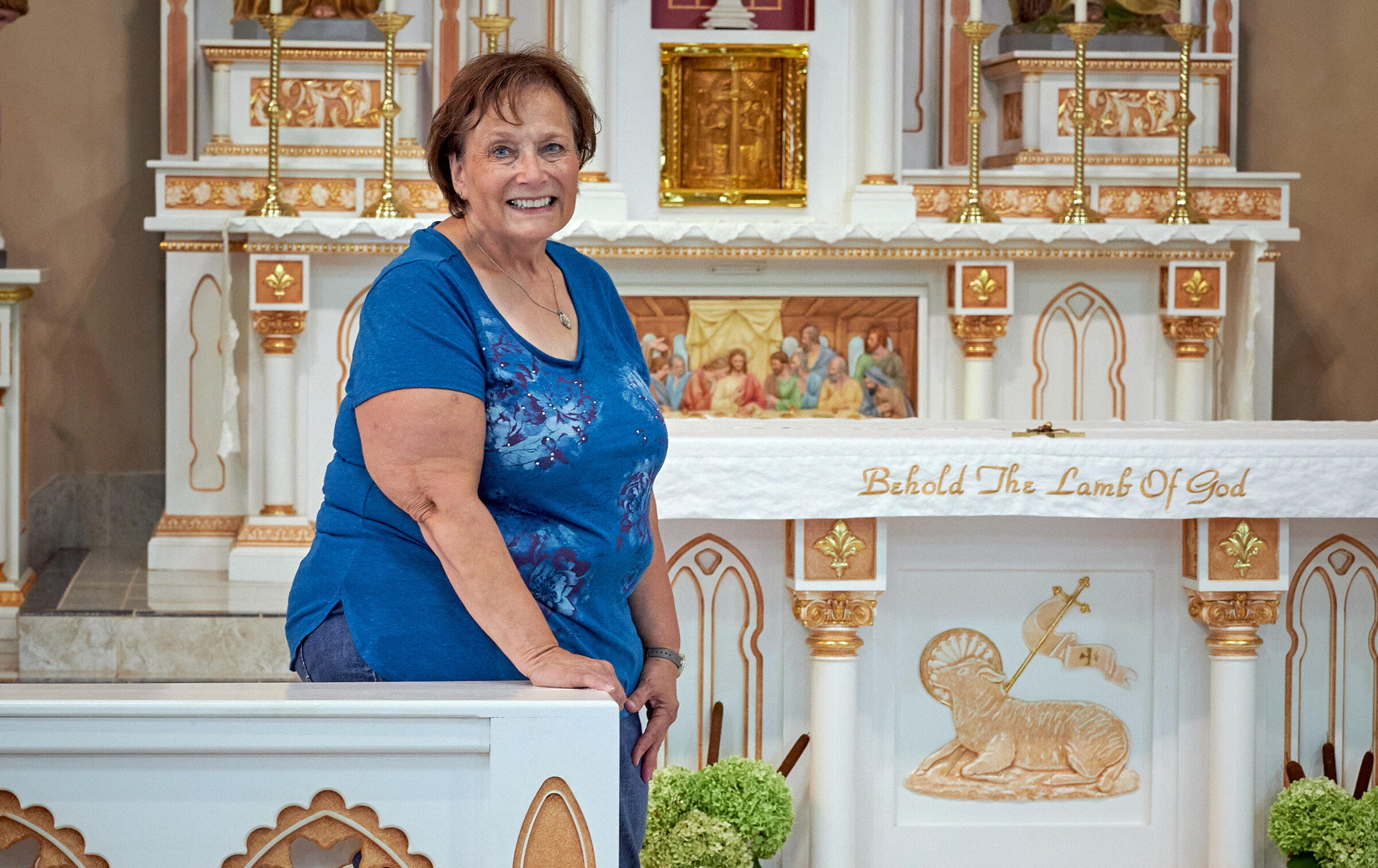 Rosemary Wolf, “Rosey” to those who know her, considers her life a blessing from God. She was born in Wiesbaden, Germany, which is located about 34 minutes, by car, west of Frankfurt. Rosey’s father was an auditor for the Army and Air Force Exchange and was stationed in Wiesbaden. There, he met and married Rosey’s mother, who was born and raised in Germany. Rosey was in kindergarten when her mother traveled to Georgetown University to be treated for cervical cancer. Several months after Rosey’s mother left Germany, her father packed up Rosey, her seven siblings and the household belongings and came stateside to join her mother. Most of Rosey’s siblings were born in Germany, but she has a sister who was born in France and her two youngest siblings were born in Spain.

Frequent moves were part of Rosey’s life. As a child, she did not think it was anything unusual. “We lived with another Air Force family in Georgetown, and then we moved to Wisconsin while my dad waited for his orders. His orders took us to Georgia and Idaho before we eventually ended up on a farm in Stratford and that is where I grew up from the fifth grade on.”

Rosey remembers attending a parish mission church in Georgia. “No white people ever went there till we got there. I am the only white girl in my first holy Communion picture. I never noticed a difference. As a kid, you see what you think—you are just one of them. They were just my friends.”

Sacrificial love is how Rosey describes the inspiration she got from her mother. “She was an amazing woman, a strong woman,” Rosey said. “When things were tough and we didn’t have money for something, she always would say, ‘We don’t need that. I have a better idea. We will do it this way.’ She was always looking for something bright rather than complaining.” At 35 years old, she was given 15 years to live after her cancer diagnosis, but she became a living miracle for Rosey because her mother was 68 when she passed away.

Rosey’s mom experienced, firsthand, the grim reality of World War II under Hitler. Young people, like herself, picked up bodies after bombings; experienced the fear of being abducted in the middle of the night; and saw Jewish people being rounded up and put into wagons. These experiences perhaps shaped Rosey’s mother’s outlook on life. She always managed to find the positives in the midst of hardships. She became Catholic because of Rosey’s dad. “I remember a time when we lived seven and a half miles from church. We would say the first three decades of the rosary on the way to church and the last two on the way home.”

Faith is the cornerstone of Rosey and her husband Randy’s life. They were blessed with seven children. Ever since their youngest son Brandon was born in 1993, Rosey and Randy have risen at 5:30 a.m. to say their morning prayers.

Oh, Lord, from now on let me not desire health or life except to spend them for you and with you. You alone know what is good for me. Therefore, do whatever seems best to you—give to me or take from me. I desire to adore equally all that comes to me from You, my Lord and God. – Blaise Pascal

O Holy Spirit, Soul of my soul, I adore You.
Enlighten, guide, strengthen and console me.
Tell me what I ought to do and command me to do it.
I promise to submit myself to all that You desire of me
And to accept all that You allow to happen to me.
Just show me what is Your Will. – Cardinal Mercier

Little did they know how their Faith would be tested; realized through the prayers they had been saying daily for many years.

With emotion, Rosey recalled the events of Jan. 13, 2018. “Earlier in the day, we went to a baby shower for Brandon and his wife. They were expecting a little boy. Adam [oldest son] was up in Phillips at our cabin with his friends and they were ice fishing. Later that night, I get a call from Adam’s wife, Jina, saying that she was getting text messages from one of Adam’s friends saying that Adam and Garrett left on their snowmobile to meet with their other friends at a restaurant in Phillips and they did not show up and no one knew where they were. I stayed behind to watch the kids and Jina and Randy drove to Phillips to find out what was going on.

“The weather was bad. The roads were slippery. The temperature was 20 below zero. Adam and Garrett were returning on their snowmobile, traveling across the lake going 40 to 50 miles an hour. They were not wearing helmets. They were putting their heads down to shield their faces from the bitterly cold wind. They did not notice the island in front of them and they slammed into it.

“Lindsey, [Rosey’s daughter and wife of Peter, Adam’s friend, who was there when Adam and Garrett were found] called me to say, ‘We found them and it’s not good. They are both dead.’ I said, ‘Alright, thank you for letting me know.’ Calmly, I hung up the phone. But I thought, ‘No, that did not happen.’ I must have been sleeping or something. So I called her back and said, ‘Lindsey, did you just call me.’ ‘Yes, mom,’ she said. And then I started thinking. ‘Wow, God, give to me or take from me.’ Praying that for how many years—did I really mean it?

“Weren’t there other people you could take? You know—the ones who are giving you problems: the murderers, the rapists. “In that moment of sadness, grief and, yes, anger—I heard something. I had this sense of a voice saying, ‘They are my children too. I couldn’t take them home right now. They weren’t ready.

“So, what do you do when you get that sense? What do you say to God? Adam was thinking about becoming a deacon. He had four children; the oldest was 7 and the youngest a year and a half.

“Then I realized that I am blessed. I realized that we are pilgrims on this earth. Earth is not our final home. Adam had that enthusiasm for life, and he was always the one ahead of everyone else. He was ready to run into life and he just nudged ahead of us to go to heaven and eternal life. Does it hurt that the kids don’t have a dad? Yes, but God works in amazing ways because my daughter-in-law re-married this past October. We talked about it. I became very close to her. I wondered why it took Adam’s death for me to realize what an amazing woman she is that he chose to be his bride.”

“The question that keeps coming back to me is: ‘You may not know the circumstance, but by now, don’t you know that God loves you so much?’ You have got to know that God, in everything He does, draws us closer to Him. Unfortunately, pain and loss are sometimes the tools that best get our attention. To me, I don’t think I could handle the times of pain and loss without my Faith, without the Church and without the Eucharist. When you receive Communion, you are sitting at the same banquet table of all of our loved ones who have gone before us.”

Rosey went through the Lay Formation Institute and is active in visiting nursing homes and people who are homebound. Initially hesitant, she decided to participate and then eventually coordinate the ministry at St. Mary Parish. She really enjoys bringing Communion to the homebound. “I absolutely love it. I feel that I am edified by them. I wish so much that my Faith is going to be as deep as theirs. As you hold up the Eucharist to them, even those in the Alzheimer’s unit, you think, ‘Does it even matter?’ But their eyes light up, and when you say, ‘The Body of Christ’, they respond, ‘Amen.’ It may be the only word they say that day. And I am thinking about the power of the Eucharist, the power of Jesus. Even when your mind goes, you still know that it is Jesus you are receiving.”

The first guy I gave Communion to who lived in Unity (Rosey’s hometown about four miles from Colby) said, “Now it’s Sunday.” Rosey said, “So, in honor of him, every time I give someone communion and I’m about to leave their room I say, ‘And now it’s Sunday, the Lord’s Day.’ So now there are some residents that beat me to it.”

“We should always look for God in what we do and find God’s fingerprints in our lives in everything that happens. Focus on what God is trying to tell you or how He is drawing you closer to Him. It may be that when you are struggling, and your heart is cracked that God enters and walks with you.”