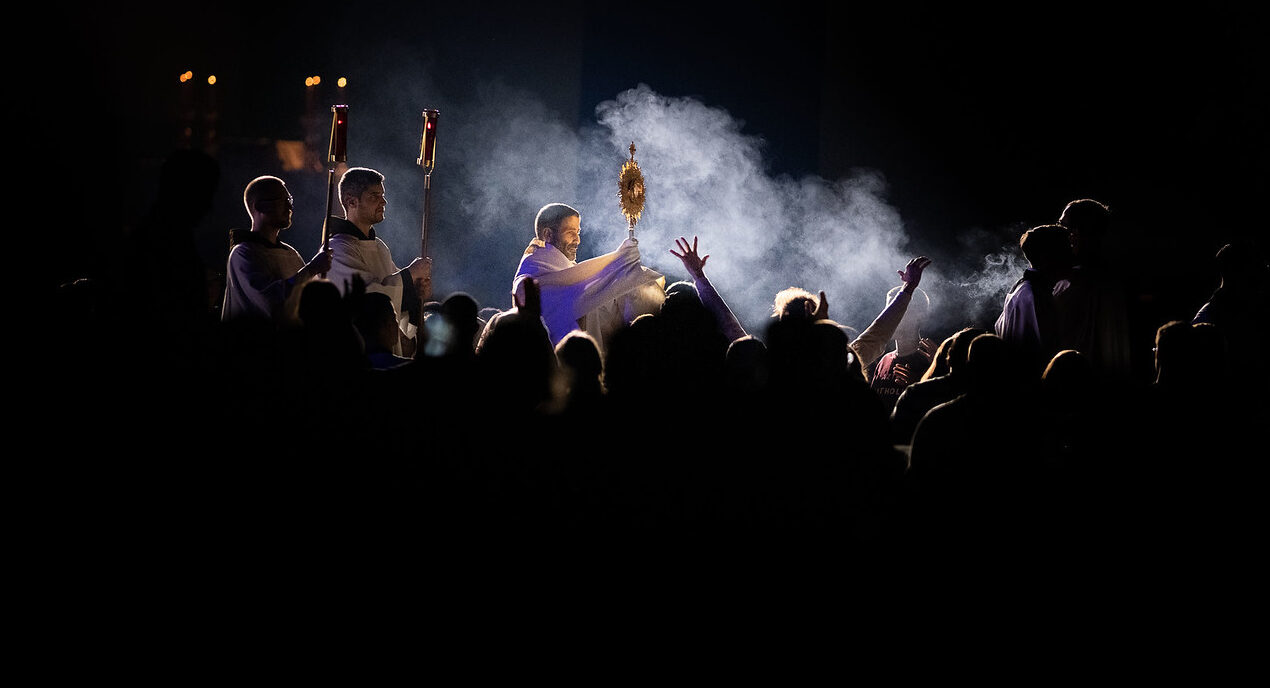 Becca helps plan so others can experience Christ

Sitting quietly in her office in Denver, Colo., Becca Zander chats about her work and explains her journey to FOCUS (Fellowship of Catholic University Students) headquarters. FOCUS is a nationwide college campus organization that promotes and encourages students to explore and deepen their Catholic Faith. Through discipleship, fellowship and mission, students are stretched to examine their Faith and choose God during a time in their lives when most people are walking away from it. Not Becca. She never walked away. Her humility reveals a steadfast Faith that never wavered but was chosen and matured.

“Growing up, I had a very good foundation through my family, through Catholic school and was very blessed with being Catholic my whole life. I would never say I had a drastic time when I thought, ‘Oh gosh, Faith is really hard.’ It was just instilled in me from the very beginning that my Faith is important and I’m very, very grateful for that. Looking back, college is where I realized I had to choose it for myself. That was hard at times because I had questions like, ‘Why should this be important?’”

Becca grew up in Chippewa Falls, graduated from McDonell Catholic High School and first attended UW-Eau Claire with an intent to major in elementary education. She quickly discovered, during classroom observation hours, that this was not what she wanted to do. She transferred to Benedictine College in Atchison, Kan., where she first attended FOCUS, led Bible studies and met like-minded people on her path toward her new declared major in theology.

“I have grown a lot through my time with FOCUS. The Lord probably knew that I needed to be in FOCUS more than other people needed me to be in FOCUS.”

“I remember talking to one of the monks at the abbey and, within this conversation, had the realization that if, in this Catholic Faith, what we truly believe is that the Lord is made present through the Eucharist and this is the gift to us—if that’s true, and we genuinely and truly believe that—then this is really important. And that needs to have a big impact on my life and it needs to be the biggest thing in my life. I need to base my life around this. This is also what steered me to FOCUS.”

During her sophomore year at Benedictine, she took her first mission trip to a reservation in North Dakota, where she helped with evangelization work. Later, traveling twice to El Salvador, she assisted with a mission called “Unbound” and helped build housing. She traveled with FOCUS and went to Rome, Italy, Ireland and Haiti.

“Haiti was the hardest mission trip I’ve ever been on. It was 10 days and it was a bit of a culture shock. We stayed with the Missionaries of Charity in Port-au-Prince. Throughout the week, we worked at an orphanage providing human interaction, holding children and feeding them. This was beautiful in itself. But one day that week, we went to a wound clinic. I was shocked because I had never been exposed to that much poverty.

“People with open wounds came to the clinic a couple times a week to receive care and have their bandages changed. I was so scared. I never wanted to be in the medical field. I’m not squeamish at the site of blood or anything, but I was so nervous. I volunteered to help in the back room to sort medicine and divvy out pills!

“At some point, a doctor, who didn’t speak English, needed help out front. I started by handing him things. After we’d done a couple (bandages), the doctor sent me to an open table to assist the line of people waiting for treatment. The first guy didn’t speak English so how could I tell him NO! I had no choice but to start cleaning this guy’s wounds. This was very powerful because about two hours went by and I just kept doing it and people kept coming in. I was so peaceful through all of it. The wounds were not just scrapes or cuts. They were open wounds that were bacteria-filled because these people lived on the streets and in dumps.

“The Lord gave me so much grace to see the beauty in this instead of shying away from it. These people didn’t flinch when the bandage would pull skin off with it. They didn’t complain. They just came to humbly have their wounds rebandaged—in this case by someone who knew nothing about medicine. The clinic felt like a place set apart for these people to come and be healed and rebandaged. The Lord got me through this. I don’t know if I could do that again but I felt like I grew up a little bit.”

Becca says she never intended to work for FOCUS after graduating but through prayer and guidance from God, she knows this is where He led her at this time. “I have grown a lot through my time with FOCUS. The Lord probably knew that I needed to be in FOCUS more than other people needed me to be in FOCUS.”

Becca started out being a missionary on campuses, which is where most FOCUS employees begin. She eventually worked into a more administrative role. Becca refers to the analogy of St. Paul’s First Letter to the Corinthians describing Christ as the head of the body and each of us having a role as a part of this body. No matter how small or great that part, it is integral to a well-functioning system for Christ’s glory. This is like the different parts of the mission. Becca has been on the events team for the past six years but, just this last year, she became the director of events, “Our team is composed of 15 or so people who primarily plan SEEK events and have a hand in a lot of other FOCUS events.”

SEEK is FOCUS’s national conference, pulling in more than 20,000 attendees for a time of prayer, fellowship, engaging talks, inspiring entertainment and, most importantly, a chance to encounter Christ in a life-changing way. (seek.focus.org/about/) In planning for these events, Becca and her team get their inspiration by visiting a campus team or reading witness stories from newsletters. This motivates everyone to put together the best content and experience for attendees at these conferences.

“We really dive into ‘What do these people need to hear? How do we re-present the Gospel to them?’ The people coming to SEEK are going to be in different walks in their Faith-life. It could be somebody who got drunk the night before and was invited by a missionary and they said, ‘Why not?’ or, it could be a disciple on campus who’s been faithfully going to Mass and involved in discipleship and Bible studies for three years. We want the content to be able to speak to everybody. We take them on a formative journey.”

In her own prayer life, Becca loves slow mornings with a cup of coffee and sitting in silence. She admits she sees the difference when she takes the time to pray and reflect. “It goes back to when I chose it for myself in college. Nobody is requiring me to pray each day. I need to choose it for myself.”

As for what her future has in store for her, she says, “I’m slowly learning how to let go of control in my own life. I’m a planner. It’s why I’m in the job that I’m in. I love what I do. I love being able to plan events of this nature and change lives. I’ll be here until the Lord tells me to do something else.”