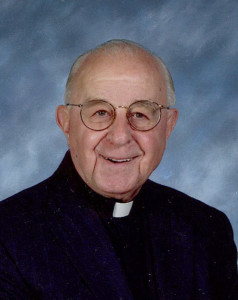 Father Chester J. Osowski, at the age of 92 and a priest for 66 years, died on Thursday, December 31, 2015 at his residence in Wisconsin Rapids.

Father Osowski was born on March 11, 1923 in the Township of Sharon in Portage County, Wisconsin, the eleventh of fourteen children born to Florian and Matilda (née Bushman) Osowski.  He attended Bruski Elementary School.  He pursued studies for the priesthood by enrolling at St. Bonaventure Minor Seminary in Sturtevant, Wisconsin; he graduated in 1940.  In the fall of 1940 he joined the Franciscan Order and spent a year in the novitiate at Pulaski, Wisconsin.  He then studied philosophy at St. Francis College in Burlington, Wisconsin and graduated Magna Cum Laude in 1945. He then studied theology for four years at Our Lady of Lourdes in Cedar Lake, Indiana and St. Mary of the Angels in Green Bay, Wisconsin.  Father Osowski was ordained a priest at St. Francis Xavier Cathedral in Green Bay by Bishop Stanislaus V. Bona for the Order of Friars Minor, Assumption Province (known as the Pulaski Franciscans).

As a senior priest Father Osowski took up residence at St. Philip Rectory in Rudolph, Wisconsin and helped out at numerous parishes. Since January 2015, he resided at Arborwood Lodge Assisted Living in Wisconsin Rapids.

The Mass of Christian Burial will be celebrated at 11 a.m. on Tuesday, January 5, 2016 at Saint Peter Parish, Stevens Point.  The Most Reverend William Patrick Callahan, Bishop of La Crosse, will be the main celebrant and Reverend Derek J. Sakowski will be the homilist. Burial will be at St. Adalbert Cemetery in Rosholt following the funeral luncheon.

The visitation will be on the day of the funeral from 8:30 a.m. until the time of the Funeral Mass.

The Diocese of La Crosse and the family are being assisted by Pisarski Funeral Home in Stevens Point.

Members of the Purgatorial Society are reminded to offer three Masses for the repose of the soul of Father Chester Osowski.  Requiescat in pace!