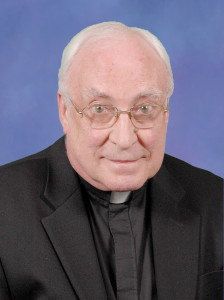 Father Eugene A. Klink, at the age of 78 and a priest for 52 years, died on Thursday, November 19, 2015, at Sacred Heart Hospital in Eau Claire, Wisconsin.

Father Klink was born on May 14, 1937 in Arcadia, Wisconsin, to Roman and Mildred (nee Lewis) Klink.  He attended SS. Peter and Paul School and Independence Public Grade School, both in Independence; Holy Cross Seminary in La Crosse; and Catholic University of America in Washington, D.C.   He was ordained a priest on May 25, 1963 by Bishop John P. Tracey at St. Joseph the Workman Cathedral in La Crosse.

Father Klink also served as Dean of the Richland Center Deanery and Dean of the Eau Claire Deanery, on the Presbyteral Council and on the College of Consultors.

Father Klink is survived by two sisters Bernice Waldera and Dorothy Olson; many nieces, nephews, great-nieces and great-nephews; and other relatives and friends.

He was preceded in death by his parents, Roman and Mildred Klink, one brother Jerome Klink, two brothers-in-law Daniel Waldera and John Olson, and one sister-in-law Delores Klink.

The Mass of Christian Burial will be celebrated at 11:00 p.m. on Monday, November 23 at Immaculate Conception Church in Eau Claire.  The Most Reverend William Patrick Callahan, Bishop of La Crosse, will be the principal celebrant and Reverend John A. Schultz will be the homilist.

Visitation will be held at Immaculate Conception Church in Eau Claire from 4:00 to 8:00p.m. on Sunday, November 22, concluding with Evening Prayer from the Office of the Dead.  Visitation will also be held from 9:00a.m. until the time of the funeral Mass on Monday.  Burial will be in the SS. Peter and Paul Cemetery in Independence. The Diocese of La Crosse and the family are being assisted by Lenmark Funeral Home in Eau Claire.

Members of the Purgatorial Society as reminded to offer three Masses for the repose of the soul of Father Klink.  Requiescat in pace.

Sincerely yours in Christ,