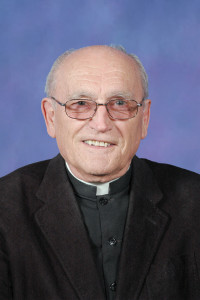 Father Thomas J. McInnis, at the age of 84 and a priest for 58 years, died on Sunday, February 7, 2016 at Mayo Clinic Health Systems-Eau Claire.

Father McInnis was born on July 15, 1931 in Eau Claire, Wisconsin, to Thomas and Catherine (née Fisher) McInnis. He attended St. Patrick Elementary and High School in Eau Claire, Wisconsin, Loras College in Dubuque, Iowa and St. Francis Seminary in Milwaukee, Wisconsin.  Father McInnis was ordained a priest on May 18, 1957 at Christ the King Chapel at Holy Cross Seminary in La Crosse by the Most Reverend John P. Treacy.

He is survived by one sister, Betty McInnis, one brother, Patrick McInnis and several nieces and nephews.

The visitation will be at St. Patrick Church in Eau Claire on Thursday, February 11, from 9:30 a.m. until the time of the Mass.

The Diocese of La Crosse and the family are being assisted by the Lenmark Gomsrud Linn Funeral Home in Eau Claire.