Martha Opelt, her family and the parishioners of St. Mary’s, Neillsville, have a calling to mission trips 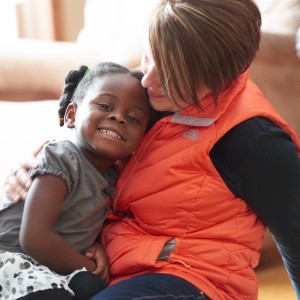 In 2001, Father Woodrow Pace connected St. Mary Parish in Neillsville with the Diocese of Kiyinda-Mityana (KMD), Uganda by initiating a pilgrimage to Africa.

Martha Opelt, a parishioner at St. Mary’s, remembers, “My son said, ‘Mom we have got to go.’ Twelve parishioners, including Martha and her son, Christopher, embarked on a journey of faith.

It was definitely eye-opening,” Martha says. “The people there have so much joy, even in the midst of poverty. When you come back, you realize you have changed forever. After returning from the first trip, I knew I would return. I had no idea how big the relationship would become.”

The next year the focus changed. “Our goal was very different from the previous year,” says Martha. “The mission was to bring back Ugandans to the U.S. We wanted a relationship with the people of Uganda that would extend further than those who would travel to Uganda. In light of the tragedy of Sept. 11, 2001, the task of working with the U.S. Embassy proved more difficult than anticipated. They were very skeptical of letting anyone come into the country.” Martha’s daughter, Heather, was part of this mission trip. It took three visits to the U.S. Embassy in Uganda to convince the government to grant visas to Sister Salome Nnambi and Leonard Kayuma.

“Once Sister Salome and Leonard arrived, it was amazing how people bonded with them,” Martha says. “The joyful, loving, faithful, humble demeanor of the Ugandan people made it easy for parishioners to fall in love with them.”

The relationship grew stronger through future reciprocal visits between the two countries. Sister Salome continues to come to the U.S. to spend time with parishioners.

Working in Uganda gave Martha the opportunity to live out a personal calling. “I tried three other times to join mission trips with three other organizations and, for one reason or another, it just didn’t work out,” she says. “I believe everyone is asked to do something to serve others through the love of Jesus. Missionary work for Uganda is part of what I’ve been asked to do.”

A sense of peace and joy through service to God and the Ugandan people is part of the experience for all missionaries. “Many people who have travelled to Uganda find in their hearts the desire to return,” says Martha. “Everyone on the pilgrimages brings something new and different and embraces different passions. The generosity of people is amazing as they continue to support the needs of the people of Uganda. We talk a lot about hope. This relationship continues to give hope to all those involved.” 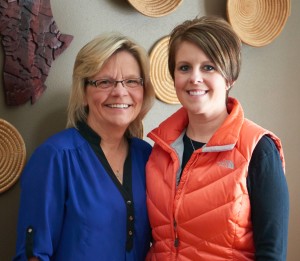 In 2009, with more support from people in four states, 24 pilgrims traveled to Uganda to build The Lady of Guadalupe School. Ugandans finished building the school in 2010 and the doors opened in January 2011.

With all the work needed in KMD, the parishioners of St. Mary’s were grateful people outside the parish wanted to support the Ugandan projects. A relationship with the family of Jesse Parker of Tomah first helped the ministry grow. The 17-year-old’s death in a car accident cut short his dreams of becoming an engineer and bringing clean water to Third World countries. The Parker family found a way to make Jesse’s dream come true through through the work of St. Mary Parish in Uganda. The first donation provided a water system for the Our Lady of Guadalupe School. Many wells have been drilled since then through this connection, costing $10,500 each.

Martha has witnessed the power of Ugandan ministry for the missionaries. She reflected on one family who paid for a well in memory of their daughter who died unexpectedly.

“It was a hard trip and really emotional for them,” she says. “They were, however, able to find some peace knowing that so many would benefit from this clean water.”

Education is another vital service St. Mary’s provides. Beyond building the Our Lady of Guadalupe Secondary School, adding a library and continued work on the construction of a science lab, many parishioners sponsor individual students. Sponsoring a student costs $100 per year. The school started with 100 students and now has 350. Before the school was built, children had to hike seven miles for their education. 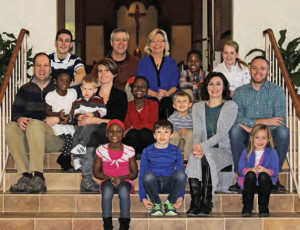 “The money benefits the families as well as the school,” says Martha. “We currently send about $12,000 a year for sponsorships.” St. Mary Parish works in partnership with other parishes to raise the sponsorship money.

Every year, the parish gets a current roster of students to follow the progress of the Ugandan children. Pilgrims visiting KMD talk to students about why they want to go to school, as well as take photographs of the children.

“Many of them want to be doctors, lawyers, nurses or teachers,” Martha says. “Some just want to go to school as a way help their families. They know how important education is in improving the lives of the people of Uganda.”

The Opelts’ connection to Uganda grew even stronger in 2013 when Heather and her husband, Kenneth, returned to Uganda and adopted their 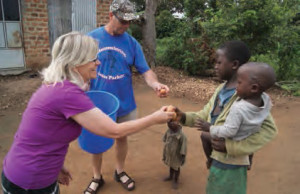 “When my daughter adopted our first grandchild, that kind of set the wheels in motion,” says Rick. “What I most took out of this trip is we are very blessed to live in the U.S., and we need to realize we live in a world that is actually joined together. It’s a wonderful thing we can go halfway across the world and have a bond with people. I believe that God brought us together.”

As the parish continues to walk in faith with the people of KMD, St. Mary’s is committed to clean water, better education and good nutrition for a people who have brought them such joy. “We know that God’s plan is big and always the best,” Martha says. “This relationship could not have happened if God had not blessed it.”

“The Ugandan people have taught us to just trust in God as they do every day,” says Martha. “Upon travelling to Uganda, you see it isn’t just about you serving them. You receive so much more. You can really see God working there, and the faith of the people is so rich.”

How can you help?

In this Year of Mercy, we are all called to give of ourselves. For information about Diocese of La Crosse parish initiatives for social concerns, go to
www.diolc.com/ministries/files/ParishSocialConcernsEfforts.pdf