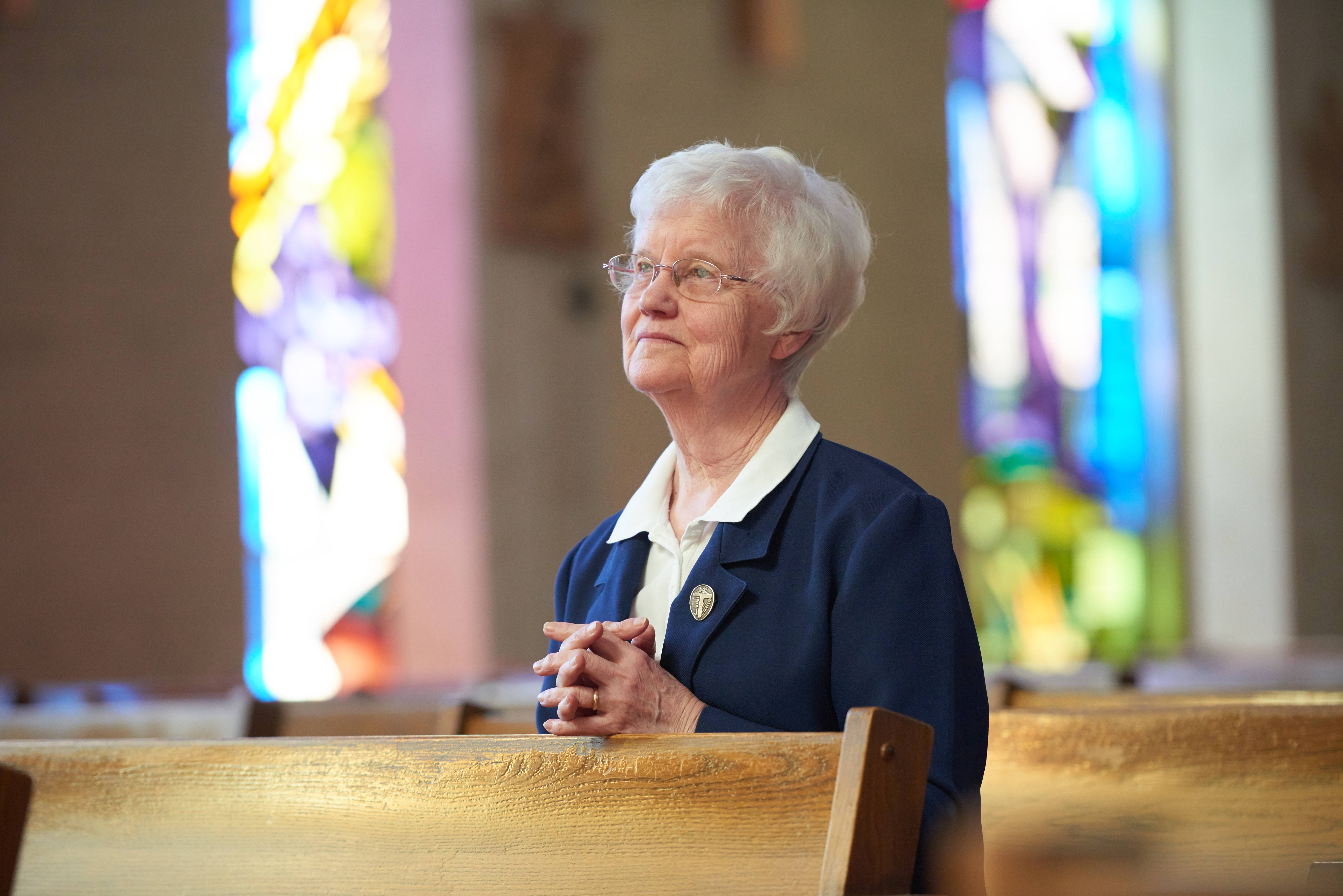 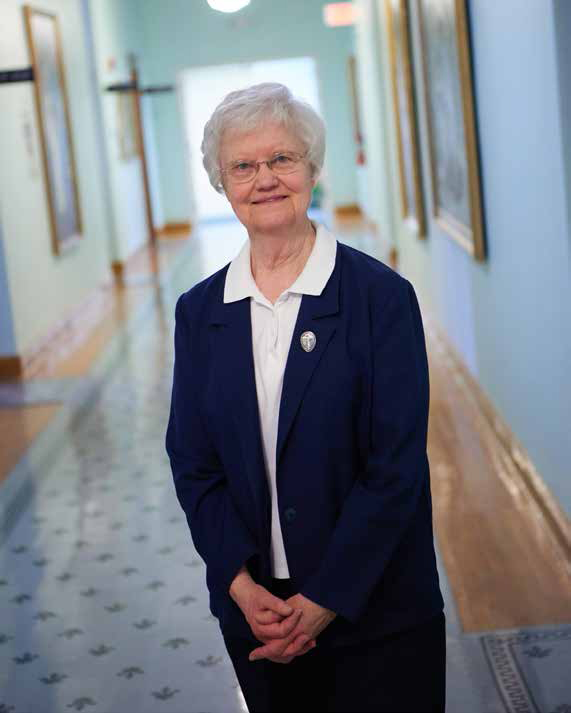 The Sisters of St. Joseph of the Third Order of St. Francis (SSJ-TOSF) have been part of Sister Mary Ann Stoltz’s life since childhood. Her parish school was run by the SSJ-TOSF and Sister Mary Ann attended St. Peter Grade School and St. Joseph Academy/Maria High School in Stevens Point. As it was for most Catholic families of her generation, Sister Mary Ann’s family believed in the importance of family, church, school and neighborhood, in that order. The sisters were supportive and caring of their students, and that made a strong impression on Sister Mary Ann while she was in school.

“I admired them and I loved them,” she says.

Every year in January, at the beginning of the second semester at the high school, students attended a three-day retreat. At the retreat during her senior year, Sister Mary Ann felt a strong pull to join the order.

“I always had the aspiration that I wanted to be a nurse,” says Sister Mary Ann. “During that retreat, I felt the call to discern whether I was meant to join the sisters. They helped to steer me in a very positive way.”

Guided by the wisdom and experiences of the sisters, Sister Mary Ann turned her attention to becoming a teacher. “They did a battery of tests and the results indicated that I would be good teacher,” says Sister Mary Ann. “I loved teaching from day one.”

After teaching and serving as a principal, Sister Mary Ann was ready for something different in her life. “I was ministering to my dad before his death, and I was beginning to feel a different call from God,” she says. “I knew I needed to further my knowledge in Scripture and theology.”

The Sisters of St. Joseph supported Sister Mary Ann’s desire to further her education. She went to Boston College for religious studies and parish services.

“I accomplished that goal in four summers,” Sister Mary Ann says. “I became a director of religious education (DRE). During those years as DRE, I studied with the deacons in the Green Bay Diocese to be a pastoral associate.”

As a pastoral associate, Sister Mary Ann shared her love of God and faith with St. Patrick Parish in Elroy for five years. This assignment was followed by her 12 years of service at St. Bronislava Parish in Plover, one of the largest parishes in the Diocese of La Crosse. “Working as a pastoral associate was truly a wonderful experience,” says Sister Mary Ann. “There were many responsibilities, but the pastors and team collaborated very well together.” 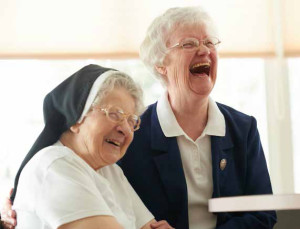 The busy life also was a challenge to her personal time with God, and Sister Mary Ann had to find a way to keep her connection with God strong. “I said God gets my first hour of the day. And so, I hold that hour very sacred,” Sister Mary Ann says. “There comes an inner peace when I am with him. The answers just come when you give God what he deserves.”

Sister Mary Ann brought an added dimension to the parish in her role as pastoral associate, especially at St. Bronislava. Parishioners connected with her differently than they did the priests who were on staff. She brought a woman’s touch and female perspective, which the parishioners appreciated. Sister Mary Ann noticed women found it easier to talk to her of their struggles. The dynamics of having a staff with different experiences and backgrounds offered more ways for the parishioners to be connected.

“I have worked with great priests and staff and together we were able to truly be present with our gifts and talents and together model Church,” says Sister Mary Ann. “My special moments were those spent with those studying the Rite of Christian Initiation for Adults (RCIA). Their enthusiasm and energy for inquiry always invigorated me. Whenever I meet one of my former students, we reminisce about those moments. I had a rich 24 years working with RCIA.”

After her parish experience, Sister Mary Ann retired in 2008. She served as a part-time chaplain at two nursing homes for almost four years, and she was asked to serve as coordinator of the SSJ-TOSF Motherhouse in Stevens Point.

“Somehow, I just felt God was saying this is where I want you,” she says. 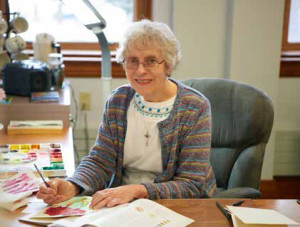 Sister Rita Schmidt is painting using water colors in her art studio at the Motherhouse.

Her connection to the order and to her sisters has inspired her, supported her growing pains and guided her to new experiences. “People can call you forth and see things in you that you may not see,” says Sister Mary Ann. “There’s a give and take on both sides. There are some challenging days, but sisters empower one another to live the truth of Gospel values.”

On a daily basis, Sister Mary Ann is mindful of her place with the SSJ-TOSF community and how good it feels to be part of the family of God.

The order was founded in Stevens Point in 1901 and has been in the Diocese of La Crosse since the 1940s, when the Wisconsin diocesan lines were redrawn and Portage County moved from the Diocese of Green Bay.

The sisters have always been active in the diocese, teaching in the Catholic schools, serving on the diocesan Pastoral Council, serving the La Crosse Education Department as supervisors and working on the Peace and Justice Committee.

Having a vibrant community requires the SSJ-TOSF to grow and change. “We need to respond to all that God asks of us,” Sister Mary Ann says. “If we don’t get on the train of change, we are going to get left behind. We have always been under the patronage of St. Joseph and he has always, always taken good care of us. As we continue to move into the future, we do so with hope and trust – that God will continue to lovingly guide the SSJ-TOSF. He needs us to serve and be his disciples.” 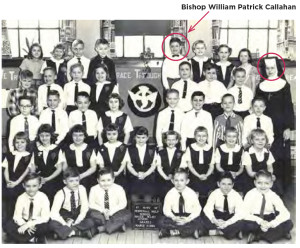 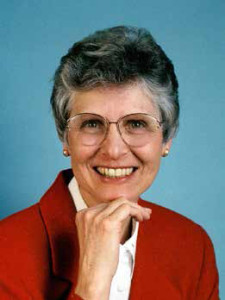 A lifelong connection with the Fransicans — Bishop Callahan and his favorite teacher, Sister Loretta

One of the teachers Bishop Callahan remembers most fondly is Sister Loretta Ciesielski. She taught third grade and guided him through the sacrament of confirmation.

Sister Loretta had recently entered the order when she was Bishop Callahan’s teacher. Her memories of the young boy are ones of a friendly and outgoing young man.

“I had that class when I was 18 turned 19,” Sister Loretta says. “I do remember him coming to my desk often in the morning and wanting to talk about everything. He was always very happy.”

Another memory that stands out for Sister Loretta of her third-grade class that year was the confirmation of her students. The day of confirmation was a stormy one and very hot, so all the doors and windows in the church were open. During the sacrament, the wind picked up and there was a loud roaring through the church. The presence of the Holy Spirit was felt by all in attendance for confirmation.

Bishop Callahan still has the little red study book he received to prepare for his confirmation catechism. The spiritual foundation he received as a student of the Sisters of St. Joseph of the Third Order of St. Francis guided him to his own vows with the Conventional Franciscans of the St. Bonaventure Province in Chicago.

Sister Mary Ann Stoltz is one example — and a shining one, at that — of the many consecrated persons in our diocese and the world over who have heard the call of Our Lord to dedicate themselves totally to Him for the sake of His Kingdom. It is truly Divine Providence that we just celebrated the Year of Consecrated Life and are now in the Extraordinary Jubilee Year of Mercy. The lives of consecrated persons are ultimately about participating in Christ’s mission of incarnating the love and mercy of the Heavenly Father so that souls will be led homeward to heaven.