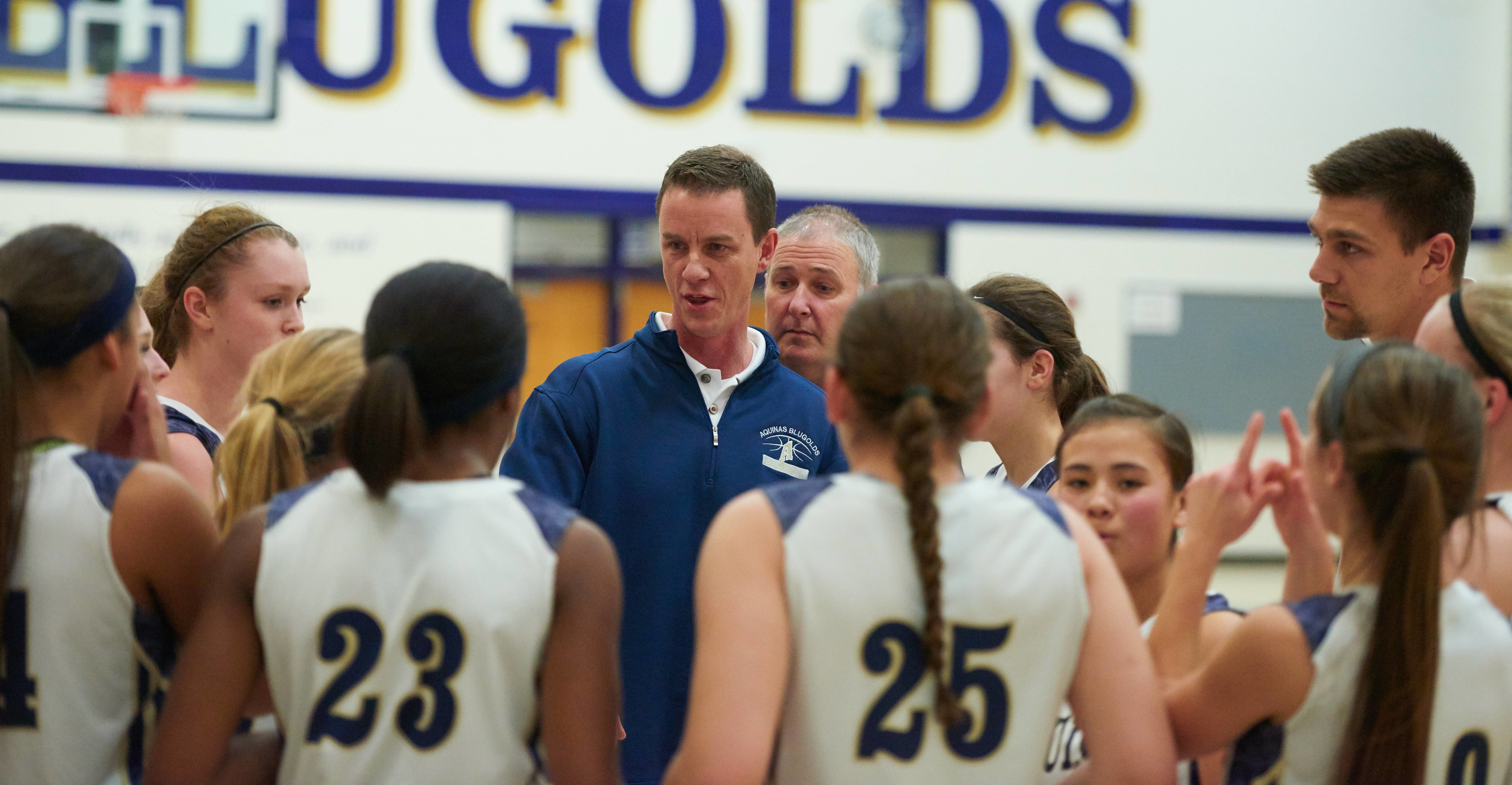 When Dave Donarski took over the position of head coach for Aquinas High School girls’ basketball in 2014, he wanted to provide the team with a positive experience, similar to his years as an athlete. Three of the girls on the team, Whittni Rezin, Madessa Collins and Kyah Steiner, were so inspired by their faith experiences at Aquinas, they went through the Rite of Christian Initiation for Adults (RCIA) to become Catholic.

Dave believes it is the role of the coaching staff at Aquinas to be models and mentors for the student athletes, but is reluctant to take credit for the girls’ conversion. “Those kids made their decisions, not me,” says Dave. “I’m not a holy roller.”

Yet faith is an important part of Dave’s life, and has been all his life. He played sports for Catholic schools from his elementary years all the way through college. His coaching career has been in Catholic schools. Living the Catholic faith every day was modeled by Dave’s parents while he was growing up.

“My parents certainly instilled the importance of faith, and they were a driving force,” Dave says. “I married into a family that was Catholic, as well. It was an easy fit.”

As a coach, Dave wants his players to leave the court with experiences they can use in daily life when high school basketball is just a memory.

“I had my own experience playing sports and it was a good one,” says Dave. “It taught me a lot of great life lessons, about battling adversity, about being really competitive. I think some of the really great people I’ve hired over time have been successful because they have a sports background. They understand what it’s like to compete against somebody else and have a never-say-die attitude. What I’d like to do is bring this attitude to kids I’ve coached.”

Modeling Christ is not something normally part of athletics, but Dave takes his responsibility to his players very seriously, and knows he has to bring faith to his team as its leader.

“I think about faith before every game,” he says. “The heat of the moment can take you to a spot where you don’t want to be. I do think about being Catholic and representing myself in a way that’s appropriate for the kids so that they can learn through my example. I wouldn’t say I’m always successful, but I’m trying. I have my own mini-prayer about being the right kind of person for these kids, treating them the way they should be treated, encouraging them and not letting the game become more than it is. I seldom succeed, but I really do think about it and try to make it happen in every game.”

The faith inspiration for the three converts on the Aquinas girls’ basketball team, he believes, was from the environment at Aquinas High School, not just their experience playing basketball.

“I think Aquinas does a really special job of preparing them really well. I think faith means something to the families that have sent their children here,” says Dave.

“The kids in particular that have most recently decided to become Catholic, they saw the faith in their teammates and friends. There’s just something a little bit different, maybe an intangible that’s difficult to describe.

I feel the girls wanted to be closer to an understanding of why a certain person acts the way he does or talks the way she does or believes the way he does, because they have more exposure to the faith. The students go to church on a regular basis through the high school, so they see certain kids worshipping like their parents taught them. I think that kind of made Catholicism interesting.”

The choice made by his players to become Catholic is inspiring to Dave. Their interest in exploring their own spirituality is not often a priority for high school students.

“I’m most impressed because, as a young kid, I didn’t have those choices,” Dave says. “I went to church because if I didn’t, Mom and Dad had a real problem, so I went and toed the line. These girls are making a conscious decision as young adults to decide to go down a different road, and to try to better understand their spirituality. I think that’s super-impressive.”

Although their experiences on the basketball court are credited for a desire to explore Catholicism, Dave believes this is too simple an explanation. The work done by him and his staff does not directly touch on theological discussions of the Catholic faith. 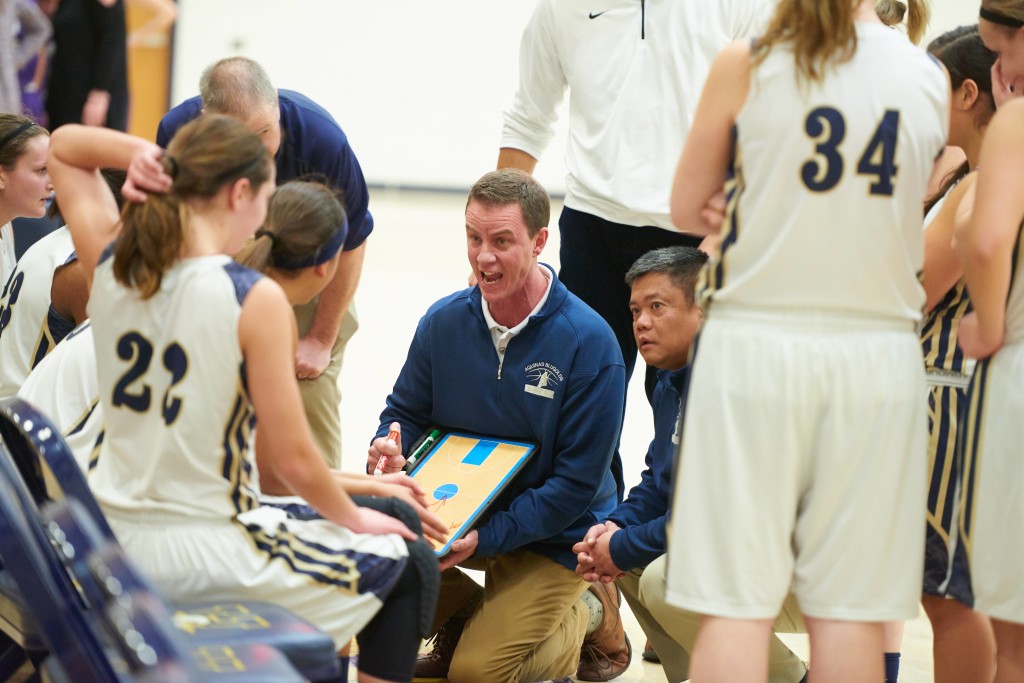 Dave gets fired up about strategy and focus as he coaches his girls to victory.

“Those discussions don’t happen,” says Dave. “I hope we are modeling as coaches what it’s like to try to lead a Christian life. We do pray before every game as a team. I hope that sets them in the right mood. I don’t know if our prayer is more of a formality, or if the girls are digesting what the prayer is all about and why we are doing it.”

For Dave, prayer before games is a way to center the team and serves as a reminder of what should be focused on during each game.

“I’m a pretty intense person and very competitive. My coaching staff shares this quality, and we have kids that are the same way,” Dave says. “I feel like we all understand the heat-of-the-moment times. Sometimes things just don’t go your way and you just have to battle through it. We talk about that battle in huddles. I don’t know that we link faith to those battles on the court, but we link it to composure, and that’s a lifelong lesson, as well. When things knock you down it’s important to have composure and not unravel. Find some inner strength, whether it comes from your faith or from something down deep.”

Because the team is young, the discussion about composure and inner strength is often repeated. Unexpected victories have happened throughout the season as a result of the girls absorbing the message.

“Those victories are a reflection of the girls more than anything else,” Dave says. “They want a win really badly. Each kid has her own role and everyone embraces that role.”

The girls are often their own worst critics when mistakes happen on the court. Dave encourages his players and redirects them when necessary. He puts each player on the court where she can be most successful.

“It’s all them. That’s why all the awards and accolades go to them. I’m just there to help them along,” says Dave.

In a recent league game against rival Onalaska High School, the team struggled through several rough spots, but ultimately won the game.

“They found a way to get through all the bad things that happened, which is like a little precursor to what life is like,” Dave says. “That’s the most impressive aspect of this team. I’ve been coaching for the better part of 20 years. Sports can teach you a great deal about life and help you through adversity. That’s what really drove me to be a coach. As you build on your faith with the sport, it really anchors you.” 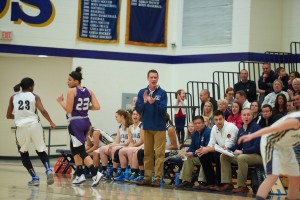 Expressing your Catholic Faith doesn’t have to come from starting something brand new, it can happen in your daily activities, much like Dave does with his students.

How do you work to express your faith in your home or work life?