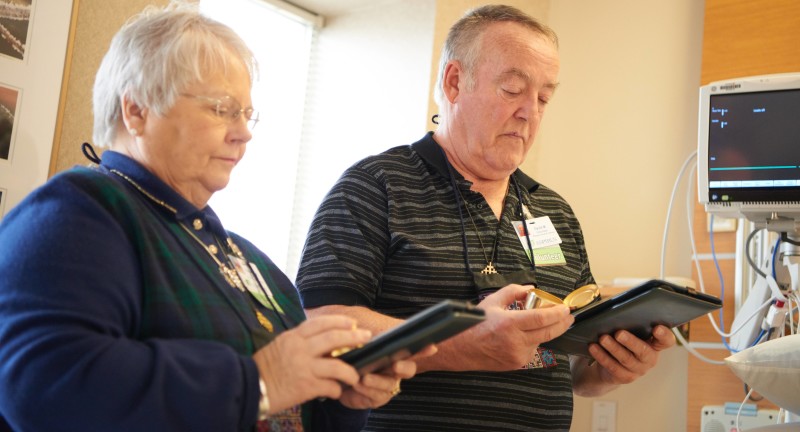 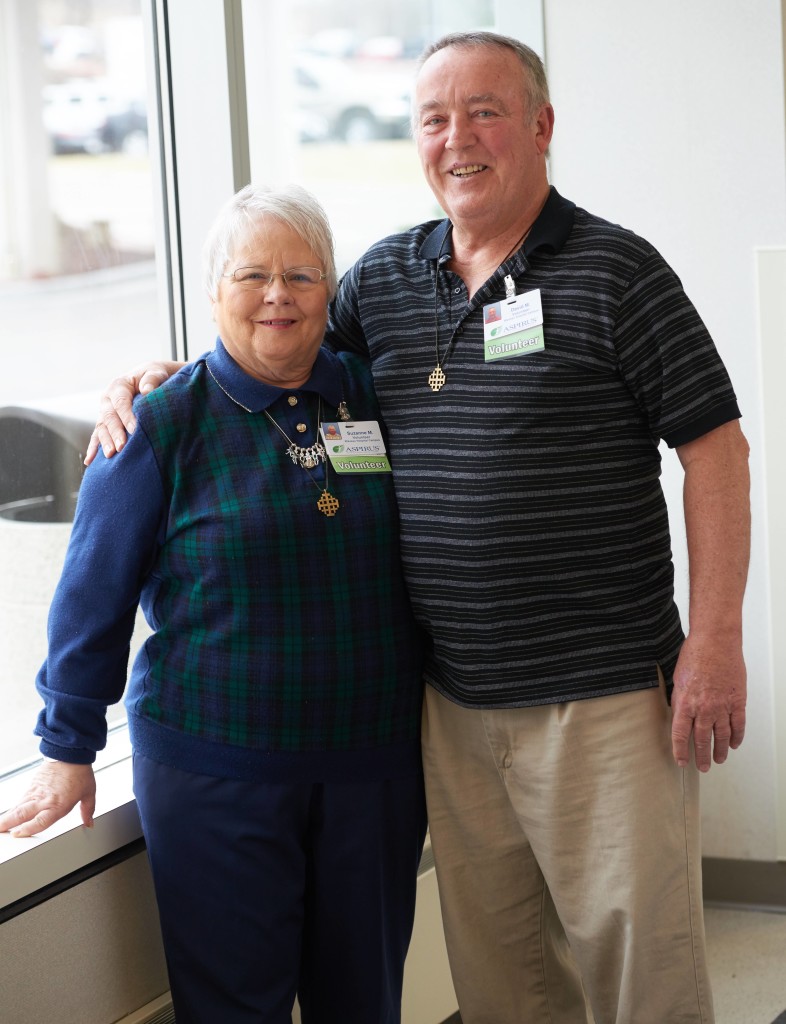 David and Suzanne Martin have shared the work and joy of hospital ministry for the last year. Members of Nativity of the Blessed Virgin Mary Parish in Marathon, the couple visit Catholic patients in Aspirus Hospital in Wausau to share the healing power of Christ through the Eucharist and prayer.

“We love to do it, and we love doing it together,” Suzanne says. “It sure makes us feel better.”

For their 51 years of marriage to date, David and Suzanne have made Christ the center of their union, and have shared their faith with others through parish ministry, as well as looking out for others. Faith has always been the heart of their family, which now includes their three children and spouses: Paula and Craig, Beth and Jerry and Andy and Kristine, as well as their seven grandchildren.

The Martins were inspired to visit the sick in the hospital after David had a short stay. The gift of Communion while he was a patient in the hospital was precious for both of them. As regular Communion distributors at Nativity of the Blessed Virgin Mary, hospital ministry was a natural transition for the couple.

“One day we were just talking,” says David. “I said, ‘We’re retired, why don’t we do some volunteering at the hospital?’”

Every other Thursday, David and Suzanne put on their badges that identify them as members of Nativity of the Blessed Virgin Mary Parish and visit patients at Aspirus Hospital. They bring the Eucharist to those who want to receive it, and provide conversation and comfort to other patients.

“I do one floor, she does the other floor,” David says. “We get a list from the hospital. It takes an hour and a half to two hours for us to see everybody. Some people like to talk a little bit. One guy said to me, ‘Can you pray?’ I can’t believe the satisfaction I get out of it. Some of the people have tears coming down their cheeks when you start praying. What a way to start the day. It’s a good way to make your day go good.”

“If we don’t give the Eucharist to the patient, then we ask if we can pray with them,” says Suzanne. “It’s so fulfilling. Sometimes they are a little bit afraid. They want comfort, and the comfort is prayer. I always say that when we distribute the Eucharist to them, it’s a spiritual medicine. They know not only do we care but we bring Jesus to them. We’re there because we want to help heal them.” 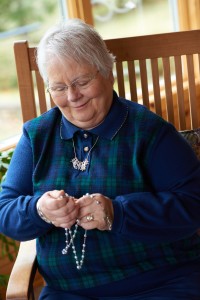 Susan holds the sterling silver rosary given to her 51 years ago by her husband Dave.

Both David and Suzanne grew up in the Catholic faith. A serious car accident just before their marriage drew them closer to Christ and to each other. It has also inspired the two of them to witness their faith whenever and wherever God needs them.

“David has increased my faith life ever since the day we were married. The Lord just sent him to me,” Suzanne says. “The night before we were married, he gave me a sterling silver rosary. People should know David is a great man.”

A CCD teacher for 41 years, Suzanne credits David for her longevity in religious education. “Every year I say I’m going to quit, and he’ll say, ‘You’re going to miss it. You know you love it.’ And he’s right, I do,’” she says. “I want to share my faith. I always say I don’t teach religious education, I’m there to share my faith and my love for God.”

The witness of Christ through bread has been a part of their lives outside of Mass and the Eucharist. Every year the Sunday before Easter, Suzanne leads

“Jesus Day” for the year’s first communicants. She mixes up bread dough made with yeast to share with the children.

They discuss how the yeast in the bread is invisible, but it helps the bread to rise. Suzanne explains how Jesus is also invisible in the Eucharist, but when He enters people of faith through Communion, they also rise to be the best person they can be.

The students then use the bread dough to make symbols that express their faith and remind them of Jesus. Whether the bread is shaped like a cross, or represents the Trinity though three braids twisted together or three spheres, the children learn the power and the inspiration behind the symbols used in their Catholic faith. Suzanne then bakes the bread, and a special shellac is applied so the symbol can stay as a table centerpiece for their first Communion celebration.

“I really enjoy Jesus Day,” says Suzanne. “They all understand the idea of the Trinity on their own.”

The Eucharist is a special part of David’s life as well. Besides attending daily Mass, David also participates every week in the eucharistic adoration chapel in
the parish. For years, he covered the 4 a.m. shift in the chapel, but a recent back surgery has made it easier to go in the afternoons. Eucharistic adoration was something David discovered in high school.

“I remember in high school we used to have adoration on Wednesday evening. A friend of mine and I went all the time,” David says. “Going now, I would set the alarm, but I always woke up before the alarm went off at 3:45. It’s the fastest hour of the day.” 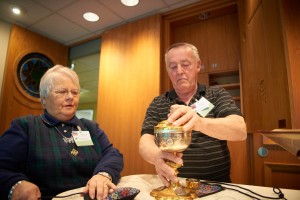 Catholic faith and tradition have been part of Suzanne’s family life since childhood and she loves being able to pass on the traditions to their three children, their spouses and seven grandchildren. She remembers the joy she felt as her maternal grandmother shared special Polish traditions for holidays. One of Suzanne’s favorites was the oplatek at Christmas. The thin wafer made of flour and water resembles a communion wafer and is consumed around the table just before the Christmas Eve supper called Wigilia.

“It’s a special time in our family and faith that we share the oplatek, and hold hands and say ‘The Our Father,’” says Suzanne. “My grandmother did that and my mother did it, and now I do it for the family. I had a special grandmother on my mother’s side. She was born in Poland and kept a lot of Polish traditions. Even though she didn’t speak much English, I could see the faith in her. I still keep those traditions.”

Suzanne credits David’s strong faith to the traditions preserved by his mother. “David’s mother also kept the family together with faith. I see that in David’s brothers and sisters,” she says.

Even before they found the joy of visiting the sick through hospital ministry, David and Suzanne made sure to bring Communion to friends and neighbors who were unable to come to church. “It’s a healing process,” says Suzanne.

Their ministry is a blessing to them and to those they serve, but David and Suzanne don’t believe they are doing anything that isn’t done by many other of Christ’s disciples. “We’re not saints,” David says with a laugh.