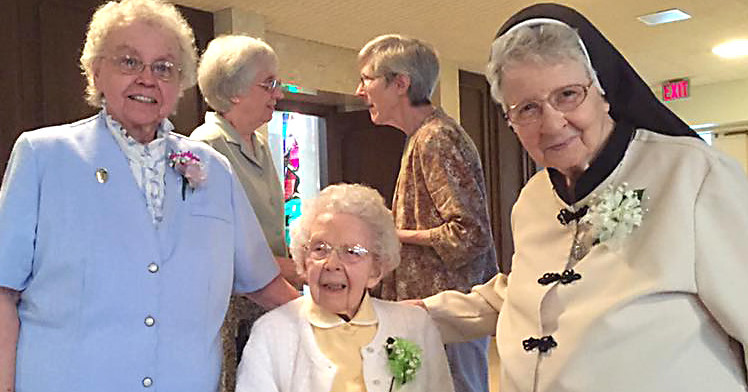 Sisters with ties to the La Crosse Diocese, who are celebrating a jubilee this year include:

Sister Leone Juszczyk (Sister Evantia) celebrates 80 years as a Sister of St. Joseph-TOSF. Her teaching career began in 1938 at St. Fidelis, Chicago, and ended at Brighton Park, Chicago, in 1988. Her teaching assignments in Stevens Point included St. Peter and Maria High Schools. Since 1988, she has worked as a volunteer in ministry to the elderly and as a Polish interpreter. Today, though retired, she continues to minister and live in Stevens Point.

Sister Irmina Bula marks 75 years as a Sister of St. Joseph-TOSF. A native of Antigo, she has been a teacher, registered dietician and has worked at a group home for developmentally disabled children. In 1983 she founded the Sisters Treatment Group Home with Sister Edmund Antoniewicz in Two Rivers. Today, she is enjoying retirement at St. Joseph Motherhouse, Stevens Point.

Sister Clarita Iwanski celebrates her 70th jubilee. The native of Fancher, WI, has had a varied ministry during her 70 years in community. It includes teaching students at St. Peter School in Stevens Point, other Wisconsin schools and in Puerto Rico. Today, she is enjoying retirement at St. Joseph Motherhouse, Stevens Point.

Sister Loretta Ciesielski (Sister Agnese), a native of Chicago, celebrates her 60th jubilee. Her ministry includes 18 years as a teacher, nine years as the SSJ-TOSF central office secretary and 29 years as secretary for the Passionist Provincial Office in Chicago. Her early teaching years were spent at St. Mary of Perpetual Help and St. Salomea schools in Chicago. She also taught at Holy Rosary School in Gary, IN.

Sister Catherine Keiliszewski (Sister Ignatius) celebrates her 60th jubilee with the Sisters of St. Joseph in Stevens Point, before heading back to her pastoral ministry in Peru. A native of Stevens Point, she spent many years stateside working in education, pastoral care and prayer leadership. She was the first woman pastoral associate in the La Crosse Diocese. She served as a director of religious education. In Stevens Point, she served at St. Peter and St. Mary (Torun) from 1983 until 2000. She then accepted an invitation to join the sisters in Tahauantinsuyo, Peru.

Sister Gerri Kryshak (Sister Clarisse) celebrates her 60th jubilee. She is a native of Stevens Point. Her ministry was in teaching, primarily in second through fourth grades in Green Bay, Owen, Hatley, La Crosse, Milwaukee, Little Chute, Oconto and St. Stanislaus School in Stevens Point. She has served as coordinator of Maria Center at the St. Joseph Motherhouse in Stevens Point and later worked with Community Care for the Elderly in Milwaukee. Today, she is enjoying retirement at the St. Joseph Motherhouse.

Sister Michele Nemojeski celebrates her 60th jubilee. She is a native of Milwaukee, having grown up at St. Barbara Parish. Her 60-year ministry has been primarily in elementary education in the La Crosse and Green Bay dioceses. In 2006, she received the Teacher of the Year Award from the Diocese of La Crosse while teaching at Sacred Heart School, Polonia.

Sister Mary Ann Stoltz (Sister Pius) celebrates her 60th jubilee. A native of Stevens Point, she enjoyed many years as a teacher, principal, director of religious education and pastoral minister before becoming coordinator of personal services at the St. Joseph Motherhouse. Her teaching assignments included St. Pius X, La Crosse. In 1991, she became a pastoral minister, including many years at St. Bronislana Parish, Plover.

Sister Paulette Bergs (Sister LaVern) celebrates her 50th jubilee this year. Her ministry has included 27 years of teaching in elementary schools throughout Wisconsin. After getting a degree in accounting, she worked in that field until she retired. Today, she lives and volunteers in Plover, WI.

Sister Lois Levandowski (Sister Paul Marie), a native of Stevens Point, marks 50 years with the Sisters of St. Joseph-TOSF this year. During the past 47 years, her teaching career has taken her to St. Bridget School, River Falls; Assumption BVM, Pulaski, and St. Thomas More, Green Bay. She lives in Green Bay and continues teaching religion at St. Thomas More School.

Sister Jennifer Ladowski marks 50 years with the Sisters of St. Joseph-TOSF. A native of Green Bay, she began her career in hospital ministry. For 27 years, she was with the City of Milwaukee Health Department, ending her career in the geriatrics department. Since retiring, she lives in Hobart, WI, and offers nursing skills to those in need.

The Sisters of St. Joseph of the Third Order of St. Francis (SSJ-TOSF), founded in 1901 in Stevens Point, WI, is a Franciscan community of about 300 sisters and associates. The members serve in diverse ministries across the United States and South America.