When Elizabeth Cruz and Brenda Alcantar were approached by Father Timothy Oudenhoven to help start a Hispanic young adult group, they didn’t hesitate. They have a passion for helping guide other young Hispanics to know more about the Catholic Church, and developing a support system was exactly what they needed. As two of the original founding members of the group “Tengo Sed De, Ti,” which means “I Thirst For You,” they helped start a movement in Abbotsford to help bring young Hispanics back into the Church and closer to God.

“When Father Tim first asked us to help with the group we decided to name it Tengo Sed De, Ti because it means having a thirst for Jesus and having the desire to know him more,” Alcantar said. “This group helps open us up because we get to talk about real issues that, at home, no one talks about. Even though we’re young, we’ve been through some hard stuff and here we get to talk about it with people who have gone through it, too.”

Since Father Tim took on the Hispanic ministry in Abbotsford, he has been on a mission to encourage the young adult parishioners back into the Church.

“I’ve been blessed to start many youth groups, but this one is different because it’s young adults, which I have wanted to do for some time,” he said. “We have a long history of Hispanic catechism, so we wanted to build upon a foundation that already has been here for many years. A lot of kids stop at first Communion, but, now, it’s wonderful because you can really fill in the gaps.” 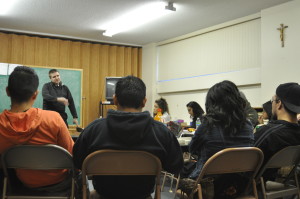 Father Tim encourages discussion on life issues like love and marriage during their weekly meeting. The members often lead the discussions, play games, and plan events for the parish youth.

For many of these young adults, they have to hold strong to their faith, especially when they have peers and family members who don’t always believe as they do.

I really see these youth groups as arks, keeping them safe during this time of flood. It’s my prayer that it’s going to save lives.”

“None of my family comes to church with me. That’s been the toughest part. But even if your family doesn’t go to church, you have family in the Church,” Alcantar said. “My family not going to church actually strengthens my faith at home. They ask why I go to church and, sometimes, your own family judges you but if you have God on your side nothing can take you down.”

Elizabeth Cruz said her family is very involved, but she often finds that society puts up barriers between her and her ability to share her faith openly.

“I work at a salon and there are things that you can’t talk about like religion and politics. I can’t bring them up at all,” Cruz said. “But there’s something happening, because the people in my chair will bring up religion by themselves. I think people just feel comfortable talking about it with me because of the way I am. They don’t even know I’m Catholic, but they sense something.”

Even though it can be hard to openly share your faith, Cruz said it is so important for her to pass on the good values she’s learned from Father Tim and the group, to her siblings and other kids in the community.

“We’re losing our youths to teen pregnancies, we’re losing our youths to drugs and suicide, and it’s not big news anymore,” Cruz said. “There are other alternatives to drinking on a Friday night. I’m so afraid of my brother getting into things, so I do this for him. I think it’s also great for him to see older kids being involved in the Church. It sets a good example.”

What’s truly inspiring about this group is they are being shaped into the new leaders of the catechism. Many of them have been teaching catechism classes for years and now will become youth group trip leaders for the summer youth activities.

“When you go on the trips, like last year to Green Bay, it’s an experience and really it can be emotional. With the kids younger than us, we want to help them to avoid going through stuff we’ve gone through and we share those experiences,” Cruz said. “What we want and what the priest wants is for the kids, starting at 3 years old, to go to CCD and get Communion and confirmed and just never stop going to church and getting to know God.”

The group is much more than young adults being able to communicate in Spanish, it’s a chance for them to gather and learn how to wade through the temptations and hardships in our world today. Father Tim is there to guide them and be a resource for their faith formation. He said the biggest blessing for him is seeing them take charge of their relationships with their faith.

“I really see these youth groups as arks, keeping them safe during this time of flood. It’s my prayer that it’s going to save lives,” Father Tim said. “So often, it’s the young people that are forgotten, but this is easy and organic and they’re in charge. It’s one thing if the priest says it because he’s supposed to say it, but when a peer says it, it means more.”