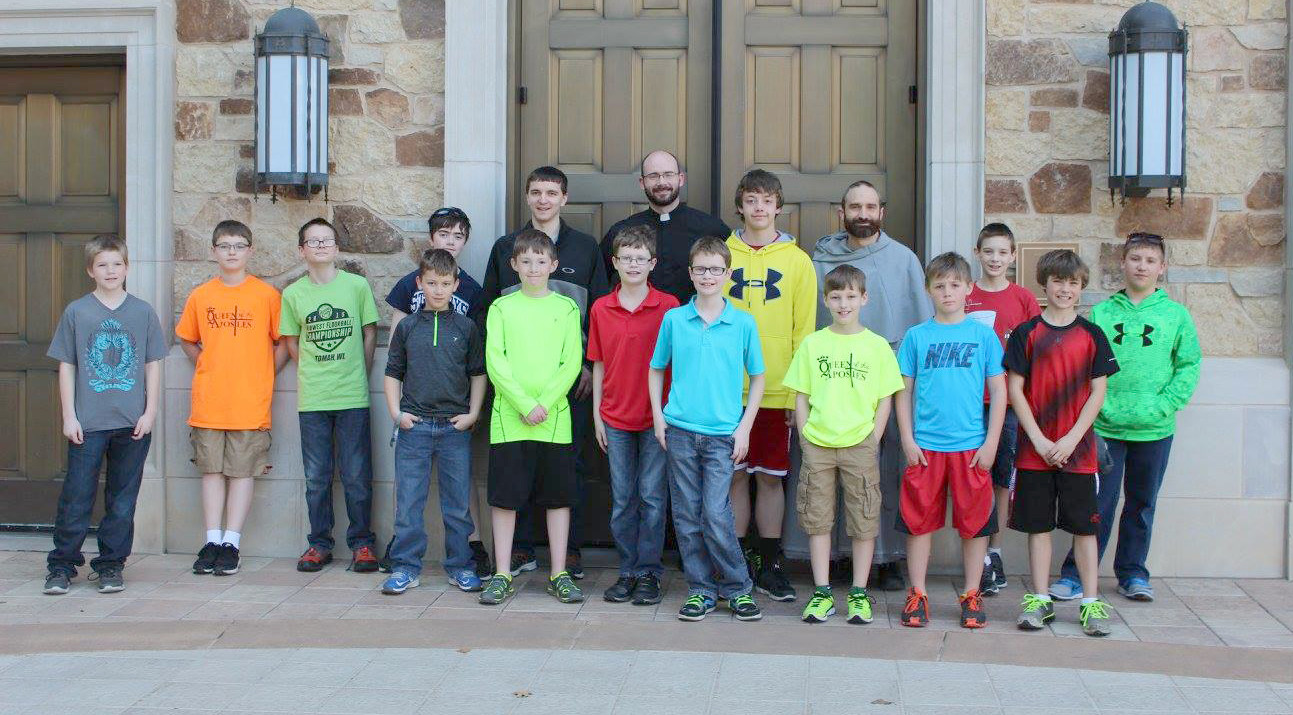 “It’s a lot of fun getting to know the kids,” he said. “It’s the only way I get to be a father. They’re my kids, too, now. I feel like we’ve developed a community within the parish, a true youth group.” 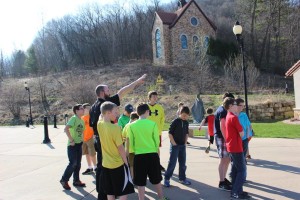 They call themselves The Frassati Boys. Inspired by the life of Bl. Pier Gorgio Frassati, this group of middle school boys is living out his message of love. They are from Queen of the Apostles Parish, and are giving back to the Tomah community by living out the beatitudes. They are living examples of mercy.

Kids are so busy with sports, schoolwork and extra-curricular activities that it’s hard to imagine they’dever have time for a youth group. Through the direction
of Father Clayton Elmhorst, 35+ boys have joined. Since September 2015, they have served at a Second Harvest food pantry and did a spring cleaning project at the Shrine of Our Lady Guadalupe. Some of the boys have even been inspired to start their own fund raiser for Mary’s Meals, where their raised $1,500 for the non-profit dedicated to feeding school children around the world. 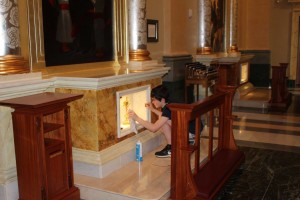 “They’re becoming known around here, even at the food pantry,” Father Clayton says. “When we help out, people come from all walks of life, up to 500 families. The boys experience mercy by carrying food to people who otherwise wouldn’t eat. They don’t see that very often, and I think it promotes compassion in kids who aren’t usually involved with these things.” The idea for the group came from the parish pastor Msgr. Richard Gilles, who wanted to give back to the parents through their children. The idea was to do something for the parents by taking time to help form their children.

“The parents are so appreciative; they often come along and volunteer. I think they are moved when they see their child giving back to the community,” he says.  They are learning the value of hard work and volunteering. If you take care of the children the parents will follow. If you love their children, and spiritually feed them the faith, the parents will appreciate it and come looking for the same thing.” 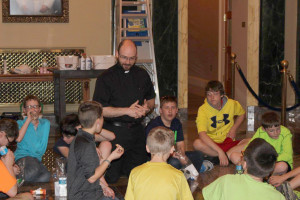 One of their most recent service projects was at the Shrine of Our Lady of Guadalupe where they learned more than just how to clean a floor.

“It was not just cleaning and scrubbing the shrine from top to bottom, but an opportunity to be up close and personal, to know that you’re cleaning something so precious and sacred,” he explains. “Hard work is important but I want them to know the spiritual side of what they’re doing, too. One boy got it when I led him to the altar and gave instructions. I reminded him how to approach the altar, clean it and be reverent. He kind of froze, looked at me from his knees and said, Father this is so cool.”

They dont just do service projects though. They make sure to trade off service projects with fun activities like fishing, paintball and dodgeball. And this summer they get to go to the Rock Falls Raceway.

“It’s only once a month we meet so it’s nice that we can do service projects, but also have some fun along the way,” he says. “They like it because we do stuff outside of church. We’re always together inside the church, other than Mass and school we don’t get to hang out much,” says Father Clayton. “It’s a lot of fun getting to know the kids. It’s the only way I get to be a father. They’re my kids, too, now. I feel like we’ve developed a community within the parish, a true youth group. The more we do this the more I see them practice their faith. The parents also see the difference too.” The boys even came up with a a catchy phrase for the group, “You know what Frassati would do?”

Even though the group only started last September, the boys are already taking it upon themselves to reach out to even more people.

“Some of our 8th grade Frassati boys were bummed the March for Life trip was cancelled, and they wanted to do something for pro-life like a walkathon or raise money. It kind of transformed into them going out on their own and starting a charity,” he says. Besides all the wonderful things the group has done, the idea of giving and being merciful to others, is something you can never start too early. “Show them how to give and be loving, and they’ll see the joy in that.”

“I want to teach these boys how to be heroic. Men love to do great things, we’ll die for others, go to war. We love ‘slaying the dragon,’” he says. “But don’t ask me to take out the trash. I’ll take a bullet before I take out the trash.” Father Clayton jokes. “I want to teach these boys you can do both.” “I tell them to look at the cross. Just look at Jesus. There you see a real man giving real love. I tell them, a real man loves like that,” Pointing to the cross he says, “If i can get them to see that, and experience what it means to be a loving man in this world, then it’s worth every minute. Getting young boys to discover how to love in the world – makes all the difference.”