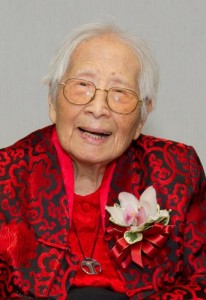 Sister M. Gabrielis, the former Mary Hu-Cheng-Kuan, was born in Wucheng Shandong Province, China, on November 11, 1911, the daughter of Anthony and Mary Li Hu.  She entered the Congregation on July 31, 1930 in China and professed her religious vows on May 18, 1933 in Springfield, Illinois. In 1936, she graduated from St. John’s School of Nursing after which she rejoined the Sisters’ Community in China and served as a nurse and Directress of Novices.  The Sisters left China to travel to America in 1948 when the Communists’ threats became serious.  Over forty years would pass before Sister Gabrielis received a visa to return to her native land to visit her family.

During her years in America, Sister Gabrielis served the Community at HSHS hospitals in Illinois and Wisconsin as a nurse and histology technician.  She served as a missionary at Star of the Sea Clinic in Kaohsiung, Taiwan from 1980 through 1987.  From 1988 through 1995, she was a volunteer at St. Joseph’s Hospital, Chippewa Falls, Wisconsin.  She came to the Motherhouse in Springfield, Illinois in 1995.

In addition to her parents, she was preceded in death by three brothers.

She is survived by a niece and a nephew living in the People’s Republic of China, and her Franciscan Sisters with whom she shared her life for 86 years.

Visitation will be held at St. Francis Convent on Monday, February 13, 2017, from 4:00-7:00 PM, with a Wake Service at 6:00 PM.  The Eucharistic Celebration and Rite of Christian Burial will be celebrated by Father Andre Schludecker, O.F.M.  on Tuesday, February, 14,2017 at 10:00 am in St. Clare of Assisi Adoration Chapel at St. Francis Convent.  Burial will be in Crucifixion Hill Cemetery.

Staab Funeral Home is in charge of arrangements.