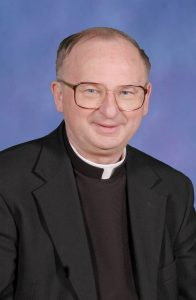 Father Allen Francis Jakubowski, at the age of 68 and a priest for 42 years, died on Tuesday, May 9, 2017 in Dorchester, Wisconsin.

He was preceded in death by his father, Aloisus and a sister-in-law, Joni.

The Mass of Christian Burial will be celebrated at Holy Spirit Church in Stevens Point on Friday, May 12, 2017 at 10:00 a.m.  Bishop William Patrick Callahan will be the main celebrant.  Father Tim Oudenhoven will be the homilist. Burial will be in Clarendon Hills Cemetery, Darien, Illinois.

The Diocese of La Crosse and the family are being assisted by Shuda Funeral Home.