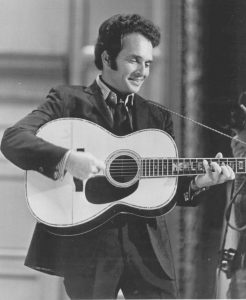 Does the name Merle Haggard ring a bell? For those 30 and older, it likely does. Does the name Merle Haggard make you think of evangelization? Probably not. Yet, on March 26 in Stevens Point, Merle Haggard, the famous country music legend, played a part in the New Evangelization. Merle passed away on April 6, 2016. Seven years earlier he told his youngest son, Ben, who was his lead guitarist from the age of 15, to take his band, The Strangers, finish his tour and, as Merle put it, “play my music until there’s no one left to listen to it.”

At Sacred Heart Parish and School in Polonia, we were looking for new ways to promote our little school AND evangelize to people who probably wouldn’t come to the church to hear about Jesus. So, we put on a traditional, straight-from-Nashville, country music concert featuring two of Merle Haggard’s sons, Ben and Noel, and Merle’s band, The Strangers. As a bonus, we got to watch one of our own Sacred Heart graduates, Phillip Smyth, perform. He was the fiddle player for the opening band, Raised Reckless, a local band with an impressive statewide following.The show, sponsored by Sacred Heart Catholic School, sold out and 1,000 people enjoyed a great evening of traditional country music. Good brand marketing? I hope so. A good community event? According to the people who were there, yes. Good evangelization? We’ll see. Our method of evangelization was simple: to show people that being a person of faith does not mean being an outcast from the rest of the world. Instead, we do engage the world — and we bring Jesus. So, we opened the entire evening with a prayer. How many country music concerts open with prayer, or, for that matter, a prayer for those who have died? I’m not sure, but it’s likely not many. We all took a moment of silent prayer for Merle and the unfortunate victims of the shooting that had just taken place in Wausau the week prior. Then I prayed, “Eternal rest grant unto them, O Lord.” In thunderous response, “And let perpetual light shine upon them” echoed back. I couldn’t help but think how many people there, Catholic and non-Catholic, practicing and non-practicing, had to notice the unity of prayer from the Catholic faithful who were among the country music lovers. The rest of the opening prayer thanked God for His gift of music and that all at the show might give Him glory. That’s all there was. Then the show began.When you hear the phrase “the New Evangelization,” what comes to mind? Often social media are what come to mind. It often is closely associated with it. Social media are essential parts of the New Evangelization. After all, most of our young people are on social media, some addictively so. But are social media the only or even primary ways to evangelize? As St. Paul says, “As a body is one though it has many parts, and all the parts of the body, though many, are one body, so also Christ.” (1 Cor 12:12) It would seem that the New Evangelization could be as diverse. Was the concert a success? In ways that we can measure, it was. In terms of evangelization, we really don’t know for sure. We’ll leave that up to the Holy Spirit. But, maybe there are some clues. Noel Haggard, whose Catholic school days were marginally positive, has invited me to come to Tyler, Texas, to bless his house this July. Hmmm!