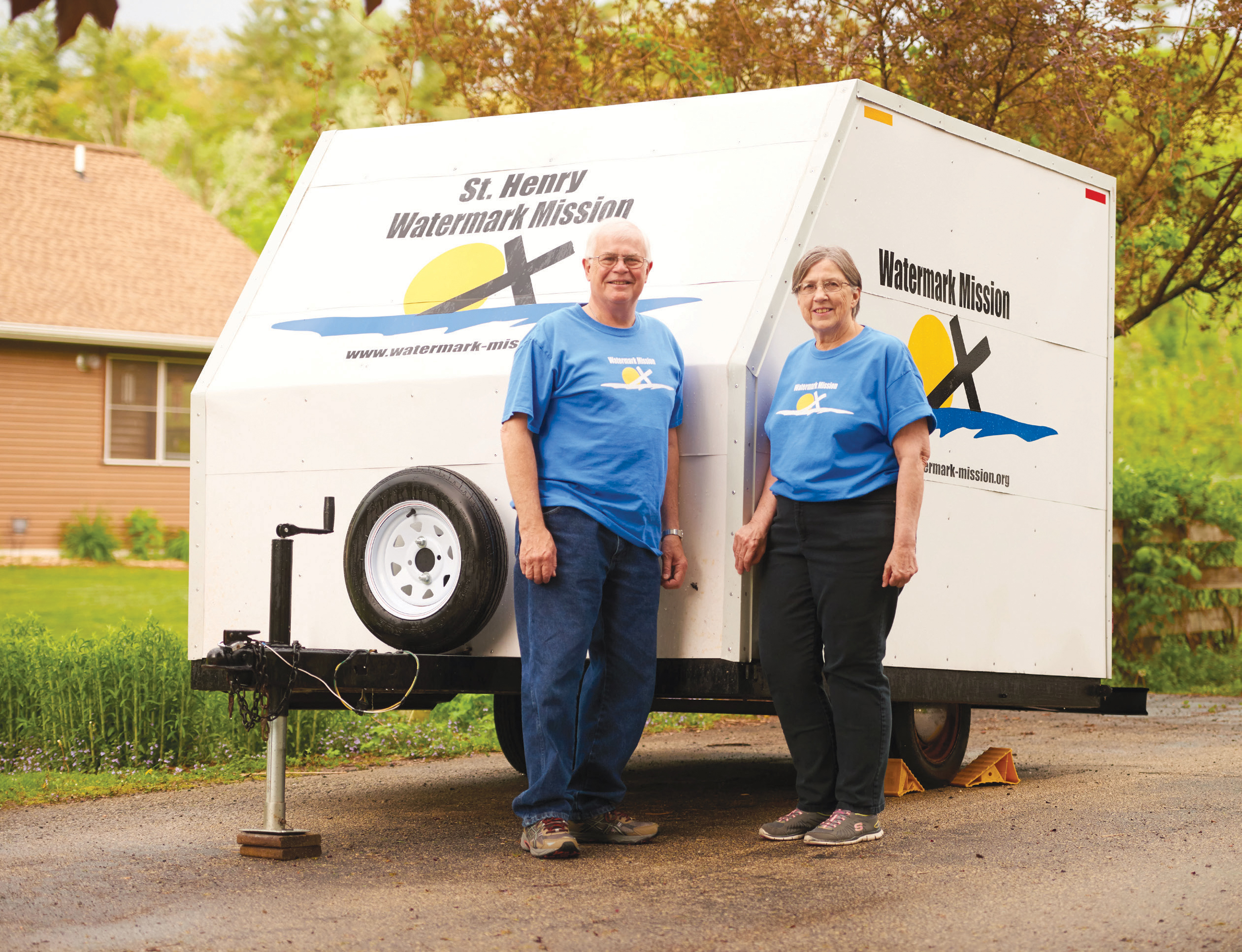 Gary and Rosey Asher have done 18 missions to disaster areas in 11 years, and they’re not slowing down

God has called each of them by name to live his own communion of love and holiness and to be one in the great family of God’s children. He has sent them forth to shine with the light of Christ and to communicate the fire of the Spirit in every part of society through their life inspired by the Gospel. Christifideles Laici – Pope St. John Paul II

Pope St. John Paul II offered the laity a new voice, a new responsibility and a renewed vocation within our church — to go out and spread the good news through our loving example of faith, hope and charity. At St. Henry Parish in Eau Galle, Gary and Rosey Asher answered that call in a way all of us lay brothers and sisters can take great encouragement from. For the last 11 years, Gary and Rosey have participated in or led 18 mission trips to disaster areas around the country. Through their work, and through the support of their parish community, they have exemplified Christ’s love and mercy to those who need it most.

Gary and Rosey Asher took their first mission trip to Waveland, Miss., not long after Hurricane Katrina. They never knew just one trip would change their lives in such a drastic way. According to Gary, their main purpose is “to assist in rebuilding the homes and lives of disaster survivors.” As Rosey recalls, it is much more than just rebuilding, “At first, I thought, ‘Well, we can give a week of our lives, not a big deal, and then just go back to our normal lives.’ Well, it was so much more than that. We kind of got addicted right away. It was so much more than I anticipated.” She continues, “It just makes you feel good to help someone.” It made them feel so good that they decided to continue their missions.

Gary and Rosey now lead the group Watermark Missions of more than 75 volunteers, with two yearly mission trips to disaster areas. St. Henry Parish contributes a great amount of resources to the mission. “We have one fundraiser a year, a waffle breakfast.” Rosey explains. “Many parishioners donate tools or money for supplies. We even have an older lady who said she wished she could go on the missions, but since she can’t she bakes a whole bunch of chocolate chip cookies to take along. Everybody in their own way helps out.” She continues, “And we are very fortunate our pastor, Father Jerry Hoeser, supports us, too.”

During a mission, each morning begins with a prayer service. Rosey believes this is essential to the success of the mission. Gary also shares how they begin the prayer service, “The Prayer of St. Teresa of Avila is how we start our prayer every morning: ‘Lord Christ, you have no body on earth but ours, no hands but ours, no feet but ours. Ours are the eyes to which your compassion must look out on the world now. Ours are the feet by which you can still go about doing good. Ours are the hands with which you bless people now. Bless our minds and bodies that we may be a blessing to others. That is our drive — we are Christ’s hands and feet here on this earth.’”

Gary and Rosey, through their actions and mind-set, exemplify what Pope St. John Paul II called the laity to: “That is what Christ’s mission is all about – helping and serving other people and I guess that basically is what we are doing — being His hands and feet and doing what we can to help and serve others.” Rosey explains one experience of helping a family during Christmas, “One winter there was one family in Minnesota, they kind of fell between the cracks of getting any help and they had heard about us. So, we went down there, we stayed in their house and fixed up stuff for them. When we got home, we had an email waiting for us saying I never realized what Christmas meant until now.”

“Most of the people we are helping now are very poor,” Gary explains, “they don’t have any insurance, they just don’t have the means to get back on their feet and back into their houses. It helps us realize how fortunate we are. You can’t imagine what some of these people have gone through until you see them and talk to them. You must let them tell their story — how it affected their life, it is part of their healing. I feel that we give them hope.”

Gary adds another inspiring story, “There was a house an older lady had with her great-granddaughter, and their roof was leaking. This little girl was just so excited to see us, she was just jumping up and down, you almost become family right away. The next day we came back, the great-granddaughter has made a card thanking our group. It just warms your heart to see how this little girl — to see how it affected her.”

Christ is never shy in paying back the volunteers with abundant graces, “We had one gentleman” Rosey begins, “who was laid off his job and it had been about two years since he worked. He was getting bored and frustrated and decided to come. When he got down there, his wife called and said he had a job interview the Monday he got back from the trip. Before we left the mission, everybody prayed over him. He said when he got to the interview the interviewer didn’t care about what he did or what his background was, all he wanted to hear about was the mission trip — and, of course, he got the job.”

Rosey believes these missions help her “want to put God in control.” She continues, “It makes you want to do more. One time in adoration, I was just sitting there listening to God and, all of the sudden, the flash hit me that what we are doing is God’s answer to other people’s prayers and that is very humbling.” Gary adds, “It’s made me want to do more things and serving others and helping others knowing you are doing what God wants you to do. You are helping bring Christ to other people, which strengthens your own faith. It makes you feel that you are doing some of the right things in life and you need to continue doing that — not necessarily for your own sake, but for the sake of others.”

Rosey believes it is essential to follow your gut when God calls you to serve Him as part of the lay faithful, “I think a lot of people are afraid to take the first step. But if you got something you want to do, take that first step. Maybe it’s not the right thing, maybe it is. Whatever it is, don’t let it sit in your mind. Make that first step and do something — just do it!” Gary continues to explain the paradox of doing Christ’s work, “I would say that until you have experienced it, you don’t really understand the value or importance of it. What you do is you get so much more from it than what you put in to it. You may think you don’t have the time to do it or the means to do it, but, in the long run, you are going to be better off for it.” In agreement, Rosey concludes, “One of my biggest regrets is that I did not start this 20 years earlier.”