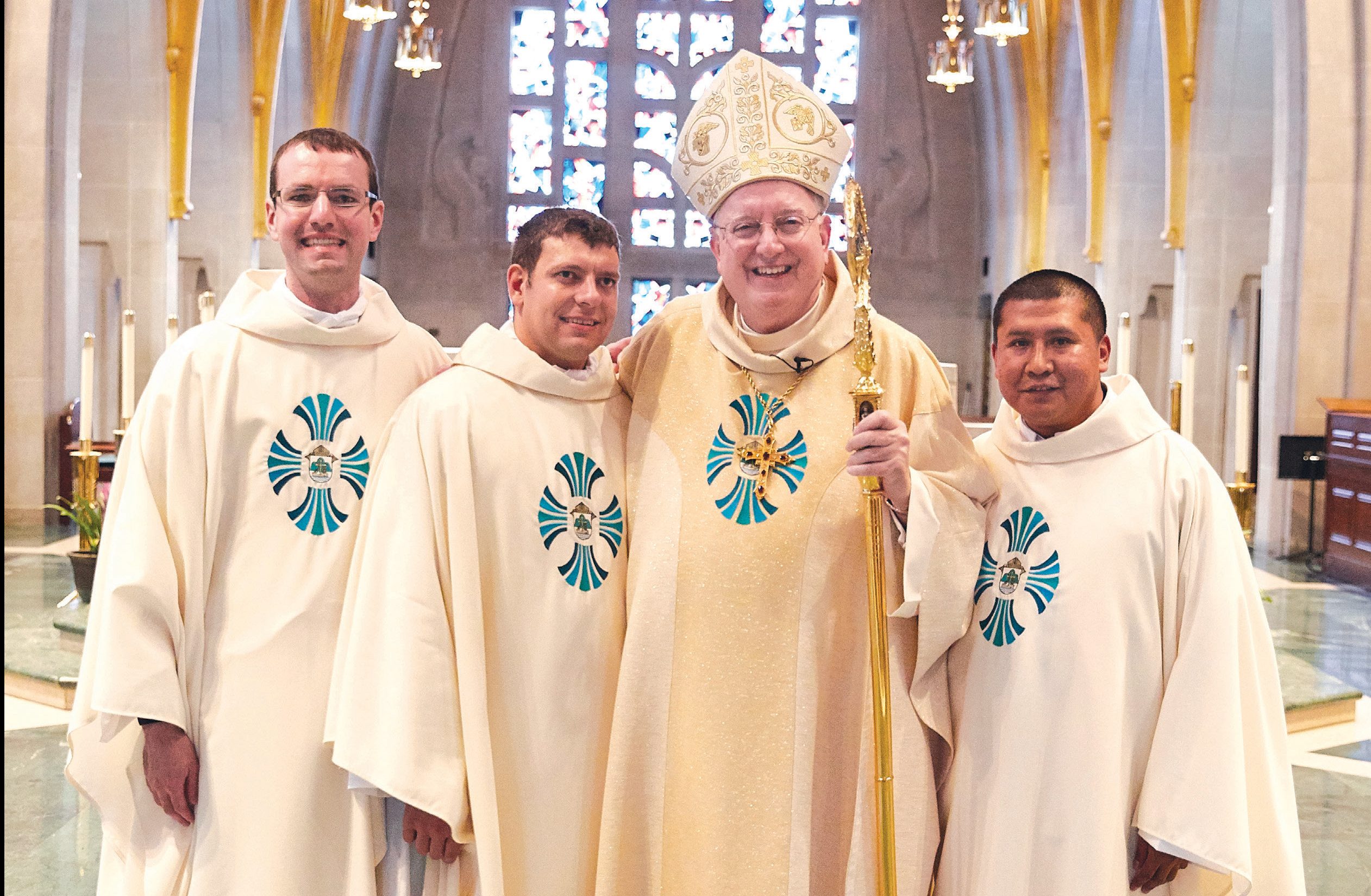 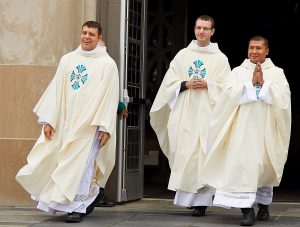 Fathers Aaron Becker, Peter Kieffer and Juan Pedro Roblez were ordained to the priesthood of Jesus Christ by Bishop William Patrick Callahan on June 24, 2017. After years of discernment and prayer while in seminary, the newly ordained have now joined the brotherhood of priests and look forward to their futures as associate pastors and chaplains in parishes and schools across the diocese. Though each has his own unique journey to answering the call, they all share a deep love for Jesus Christ and a desire to serve in His likeness and continue His work for the people of God.

At age 2, Father Becker was in a farming accident where his head became caught in the tire of a large tractor.
“The accident broke my skull and, by all accounts, I should have died that day,” he said. “The accident left me blind in my left eye, but that was pretty much it. Definitely the work of God, that’s for sure.”

He said he felt the pull to become a priest from that time on, with support from his parents, Daniel and Bernice, and especially his grandma, Helen Schmit.

“God bless her, my grandma always said that God has a purpose for everyone and that I had a very special purpose because I got a second chance,” he said. “She always thought the greatest thing a man could do on earth was to be a priest.”

Growing up, he often considered the priesthood and would joke about it with his family.

“I heard a priest once say his hands were made for chalices not callouses. I always loved saying that to my dad as I was milking cows,” he said. “I just didn’t realize how serious that would become.” 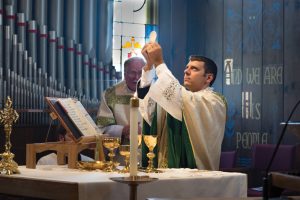 Father Becker’s first Mass at his home parish of Christ the King in Spencer.

As he entered high school in Spencer, he was always involved at his church, Christ the King Parish, but he began to question his desire to become a priest and put the idea on the back burner.Father Becker recalls when he was in high school, Father Matt Marshall contacted the young Becker to see if he wanted to do a seminary visit. The first year, he declined, but the following year, Father Marshall called again and he agreed to see what seminary life was all about.

“God Bless her, my grandma always said that God has a purpose for everyone and that I had a very special purpose because I got a second chance.”

“I went and realized that the guys weren’t strange, they were normal and liked to hunt and fish and talk about sports,” he said. “It was a worry of mine, but as soon as I spent some time with them, I became more interested.”

He attended St. John Vianney College Seminary in St. Paul, Minn., but he also had the opportunity to attend the Pontifical North American College (NAC) in Rome.

“It was an amazing experience,” he said. “My time in seminary went so fast. You think it sounds like a long time when you start, but it just flies.”

As ordination day arrived, Father Becker said he was trying to take in every moment of the day and was struck by the magnitude of it all.
“I was able to pray through the ceremony, which I didn’t think I would be able to do,” he said. “Especially while laying prostrate, that was a special moment, I just cried through it.”Now as he adjusts to his first assignment as associate pastor of Our Lady Queen of Heaven Parish and chaplain at Assumption Middle School and High School in Wisconsin Rapids, Father Becker looks forward to getting to know his parishioners and meeting the students.

“I love meeting the parishioners and celebrating the sacraments, and I can’t wait to help in the schools,” he said. “Kids have so much to deal with, especially in this culture, so I hope to be that spiritual guidance for them and to really help them truly understand that Jesus Christ, Our Lord and Savior, is always with them and there for them. I can say that to them till I’m blue in the face, but helping them to really grasp that is going to be a great challenge that I’m excited to be a part of their faith lives.” 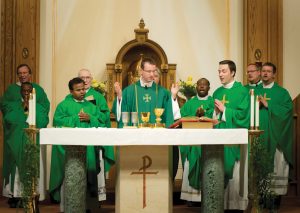 Father Peter Kieffer
Father Peter Kieffer grew up in La Crosse and is the youngest of four children of Tom and Maureen Kieffer. He grew up as a parishioner at Blessed Sacrament Parish and attended Aquinas High School, where he said the inspiration for exploring the priesthood really began. At the age of 15, a young Peter Kieffer was sitting in his religion class, where they were discussing the sacraments. During the lesson about holy orders, he said hearing about the graces priests receive when ordained really resonated.

“Hearing about the holy orders really stuck with me for a while, and it really started me thinking about the priesthood in a more serious way,” he said. “At that point, I wasn’t quite ready to go to the seminary, but I graduated in 2007 and then, in my junior year of college at St. Mary University in Winona, I met a priest who encouraged me to explore the priesthood, so I brought it to prayer.”

A few months later, he contacted the Vocations Office and started seminary the following fall. He looks back fondly at his time spent in seminary, but his experience in Rome further solidified his decision to become a priest.

“I attended the Pontifical North American College (NAC) in Rome and received excellent formation there,” he said. “During my two years there, I got to see the white smoke and Pope Francis addressing the world for the first time; met people from all over the world; and there was just something about being there that really added to my formation.”

He completed his seminary in the United States at St. Francis de Sales Seminary in Milwaukee before being ordained in June.
When ordination day arrived, he remembers it went by very quickly, but it all became real to him as his name was called.

“I remember feeling very happy and smiling a lot and just a lot of peace. One moment I really remember was when my name was called and I began walking into the sanctuary. As I walked up, I looked and saw the bishop had a big smile on his face and that really stands out to me and represents the joy of the day.

“I will never forget the moment when my hands were anointed with chrism,” he said. “That moment stood out and it became very real that God called me to be a priest and having my hands anointed made me feel like a priest. It was very powerful.” During his first Mass as a priest, Father Kieffer was surrounded by family members and parishioners he has known his whole life, and a group of his new brother priests were there to concelebrate with him.

“The whole day went by quickly, but was very beautiful and a number of priests from the diocese and priests I knew from seminary were present and to receive the support from other priests was very humbling and wonderful,” he said. As the associate pastor of St. Matthew Parish and Holy Name Parish and chaplain at Newman Middle School in Wausau, he is very busy getting to know his parishioners and getting used to being called “Father.”

“So far, I really enjoy being a priest getting to know the parishioners and getting to celebrate the sacraments. I really love saying Mass and hearing confessions,” he said. “I just did my first anointing and it was very moving and humbling to be able to provide that comfort.” 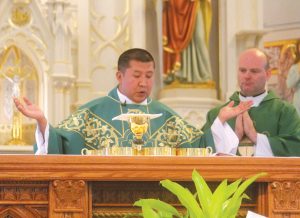 Father Juan Pedro Roblez
Though not a native son to the Diocese of La Crosse, Father Juan Pedro Roblez has been welcomed with open arms and has fully immersed himself here in Wisconsin.Roblez arrived in the diocese five years ago from Mexico after 15 years in the Diocese of Guadalajara. Though he became a priest at the age of 39, he had been dreaming of becoming a part of the church since he was 3.

As one of six children to parents Jose Roblez and Luisa Baltazar, Father Roblez was the first of his family to leave home.At age 14, he left to attend a seminary boarding school. He wanted to go, so his parents drove many hours to take him, but he soon realized that they left him with 300 strangers and he soon wanted to leave.

“I told them I need to return home, but I didn’t see my parents for six months,” he said.

Father Roblez completed his formation in Mexico City, but soon a former schoolmate would make a suggestion that would change his life.
After four attempts, he came to the diocese on the recommendation of a seminary classmate who prompted him to pray and ask God for guidance.

“I never thought about coming to the United States,” he said. “I was conscious it would be hard for me, with a new culture and a new language.”

With only having had a month of English classes while in seminary, Father Roblez’s best English practice came from serving in parishes in Wausau, Marshfield and Independence, which allowed him to get to know the culture and the people.

Father said he feels very fortunate because he has his new parish family here in the United States and his family and parish back in Mexico who are always praying for him.

Father Roblez looks forward to his first assignment as associate pastor of St. Patrick Parish in Sparta and St. John the Baptist Parish in Summit Ridge, and knows that working with the people of God will be the most rewarding part about being a priest.

“In all my formation I can remember, when I was a child, it was hard because I was shy, but now I enjoy being with the people,” he said. “It’s very satisfying to stay close to the people and to have the connection is a gift.”

The Ordinands kneel before the bishop and diocesan priests to receive the Laying of Hands.