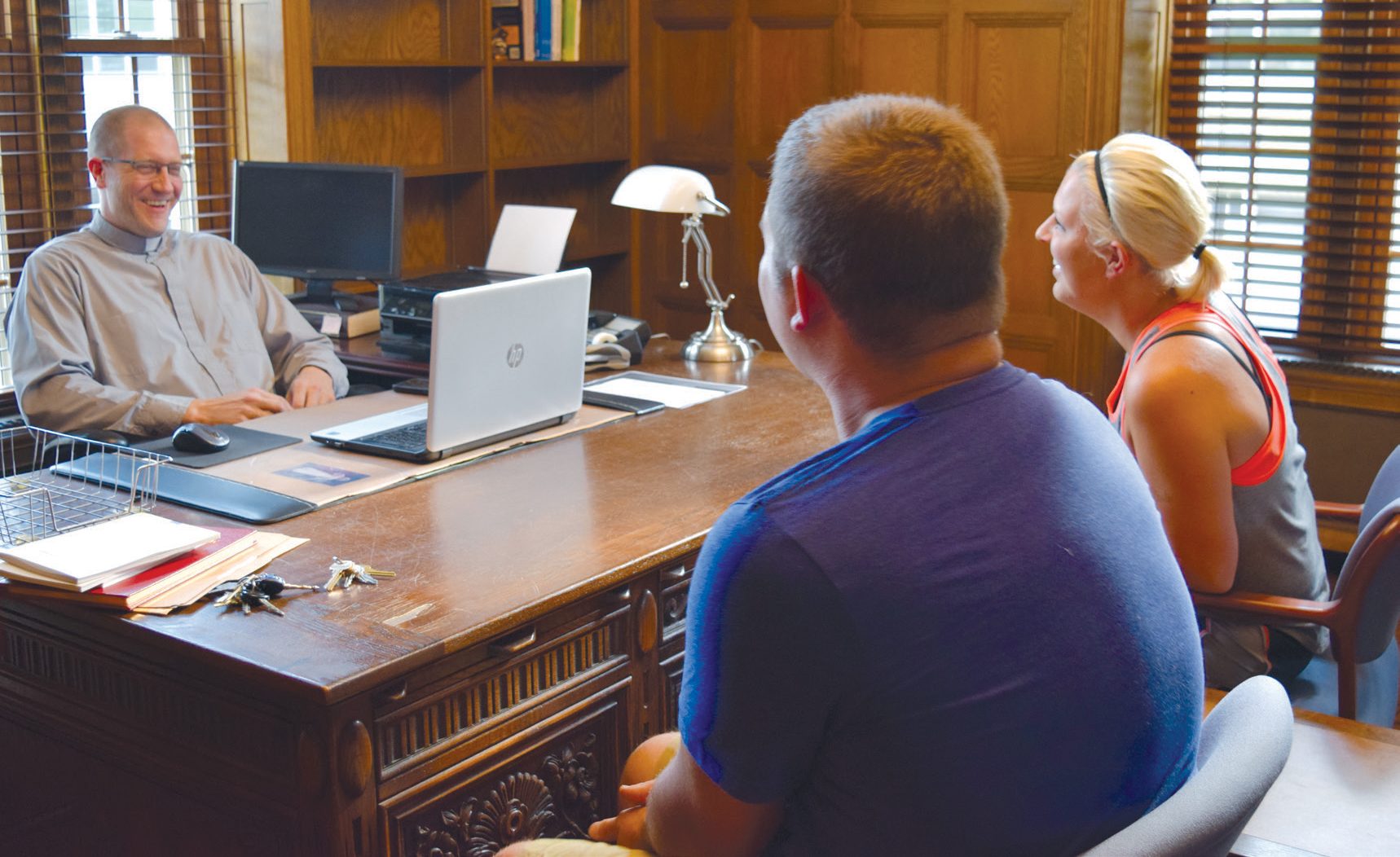 Mike Horgan’s journey to the diaconate

It wasn’t until he began his formation for the diaconate that Michael Horgan began to notice all of the “seeds” that had been planted throughout his life that put him on the path toward ordination. The people, experiences and moments that seemed happenstance all began to fit together and give him a glimpse of the Lord’s hand in the journey.

A lifelong member of St. Joseph Parish in Stevens Point, Michael is the first to admit that being a deacon wasn’t on his radar.

Growing up, Michael was one of six children, the sole boy in the bunch. His parents were actively involved in Michael’s life, as well as in their parish. He attended Catholic schools, graduating from Pacelli in 1987. “Despite 12 years of Catholic schools, I knew very little about the faith — mainly because I was indifferent back then and didn’t pay attention,” Michael admits. He met his wife Lori in Eau Claire, where they both attended college. The couple made their way back to Stevens Point and there Michael worked for and eventually took over his family business as a third-generation owner. Michael and Lori have four young adult children — David, Emily, Ally and Maya — all of whom attend or attended Pacelli Catholic Schools.

About 10 years ago, Michael’s then-pastor, Father Alan Burkhart, planted a seed, asking him if he ever considered the diaconate. At the time, it was not at all something Michael, who had a full plate, felt compelled to do.

Some years later, Michael says, “I entered what might be considered a mid-life crisis. I was lost in my faith — a real “Martha” who was very involved at home, at work, at church and in the community, but despite all the hard work I felt empty. Despite outward appearances, I was living a self-centered life pursuing the wrong things. My family life and my marriage were suffering because of it. I didn’t like who I was and I was angry, at myself and at the world.”

“It was around this time that Lori started listening to Relevant Radio,” Michael explains. “It wasn’t long before she had it playing almost constantly — in the car, in the bathroom, it seemed everywhere I went. I resisted. She listened to a lot of the programming, but, in particular, she started listening to some priest named “Father Corapi.” However, one early morning as I began the weekly drive to my office down in Pewaukee, Father Corapi broke through … I finally LISTENED. What I needed most at the time was for someone to shake me out of complacency; to TELL me that I needed to change; that my soul was in danger. His style isn’t for everyone, but it was exactly what I needed.”

“My late grandpa, David Horgan, was a special man who touched many lives, including mine. He was a powerful witness to Jesus. He also had a beautiful devotion to the Blessed Mother; and he shared it with EVERYONE. I didn’t appreciate it at the time. But he would continue on despite my eye-rolling and heavy sighs. Without being aware of it, the seeds were being planted deep within me — seeds of love for Mary. With my life in near shambles and my faith life dormant, I began — at Father Corapi’s prompting — to pray the Rosary. The seeds planted so long ago began to grow; as did a loving relationship with the Blessed Mother. That was nearly 10 years ago, and my devotion to her continues today. From there, Mary took control of my life. Within a few weeks, and with Lori’s approval, we began looking into deacon formation. It is through Mary’s intercession and guidance that I am a deacon today.” Those next years of Michael’s lay and deacon formation were a struggle to balance family responsibilities and his business. Balancing it all remains a struggle even today as his ministry continues to develop. But his family has been very supportive of his vocational call, trusting that if it was “truly a call from God, then God would find a way to make it all work.” And that He did.

On Oct. 29, 2016, Michael Horgan was ordained a deacon for the Diocese of La Crosse by Bishop William Patrick Callahan at the Cathedral of St. Joseph the Workman. Along with his four “formation brothers” and surrounded by his family, friends and parishioners, he made his vows.

Michael recalls the day with fondness, sitting next to his wife, holding her hand, seeing his son singing and feeling the supportive hands of his parents on his shoulders. “There were many similarities to my wedding day,” he reminisces. “So much had gone into that moment.” The day and the experience was a whirlwind for him, a whirlwind that tossed him into ministry at two parishes.

“Deacon Mike” or “Deacon Dad,” as his kids like to call him, serves at St. Joseph and St. Stephen parishes. While continuing to run his family business full-time, Michael’s primary responsibility in the parishes is working with couples who are preparing for marriage. He also assists and sometimes preaches at weekday and weekend Masses, and occasionally helps with RCIA, baptisms and wherever else he is directed.

Michael’s plate remains as full as ever, but he is no longer searching to fill the emptiness he once felt amid his activity. He found what he was looking for and is eager to share it.

“I’ve only scratched the surface [learning about the Church],” he explains, “but the more I learn, the more I come to appreciate the beauty and wisdom of her teachings … With that said, I believe evangelization starts not with theology and doctrine, but by genuine Christian living; helping others to know Jesus and the joy of following Him. I’m honored and humbled to be called to this ministry despite my own brokenness; and I hope, with God’s help, to do it well.”

Story and photography by Amy Eichsteadt