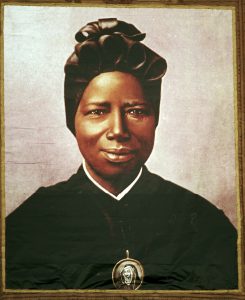 A tapestry portrait of St. Josephine Bakhita, an African slave who died in 1947, hangs from the facade of St. Peter’s Basilica during her canonization at the Vatican Oct. 1, 2000. St. Bakhita has become an intercessor for Sudanese Catholics who pray for her help in ending the conflict in Darfur. St. Bakhita was born in the Darfur region of what is now Sudan. (CNS photo/L’Osservatore Romano via Reuters) (Sept. 5, 2008)

Kidnapped. Beaten. Sold. So traumatized she forgot her own name. This is the horrifying start of the story of St. Josephine Bakhita.

Despite years of being enslaved and abused, St. Josephine’s story ends in life-giving hope. Her recovery is a testimony to the role that believing in God’s love can play in helping victims of enslavement survive. St. Josephine came to believe that God loved her and called her by name. Canonized in 2000, she offers hope to those seeking to reclaim their dignity as God’s beloved children.

She has become the patron saint for all victims of trafficking. An annual day of prayer and awareness against human trafficking is observed on her feast day, Feb. 8. Born around 1869, the child later named Bakhita led a carefree life as a member of the Daju people of Sudan. Life drastically changed when Arab slave traders murdered her parents and kidnapped her. She was forced to walk more than 600 miles barefoot and was sold five times over the next 12 years in the slave markets of Sudan.

After being sold to an Italian merchant, she came to be cared for by the Canossian Sisters in Italy, and this is when Bakhita learned who she really was. Drawn to Jesus on the cross, she learned of a God “she had experienced in her heart, without knowing who He was” since she was a child. In the words of Pope Benedict, “She came to know that this Lord even knew her, that He had created her — that He actually loved her.” Refusing to leave the sisters when her master returned, Bakhita won freedom in 1889 when an Italian court ruled that she had never legally been a slave. In control of her life for the first time, Bakhita joined the sisters. Baptized Josephine Margaret and Fortunata, she professed her vows in 1896 and called others to love God while serving as a cook, sacristan and doorkeeper at Schio for 42 years. Beloved by the residents of Venice for her hopeful presence and joyful smile, this sister they fondly called Sor Moretta (“little brown sister”) or Madre Moretta (“black mother”) was a special source of inspiration.

Though she endured much physical pain in her final years, she died smiling in 1947, calling out to Our Lady. In her biography, she reveals that she had transcended her suffering to forgive her captors, “If I were to meet those who kidnapped me, and even those who tortured me, I would kneel and kiss their hands. For, if these things had not happened, I would not have been a Christian and a religious today.”