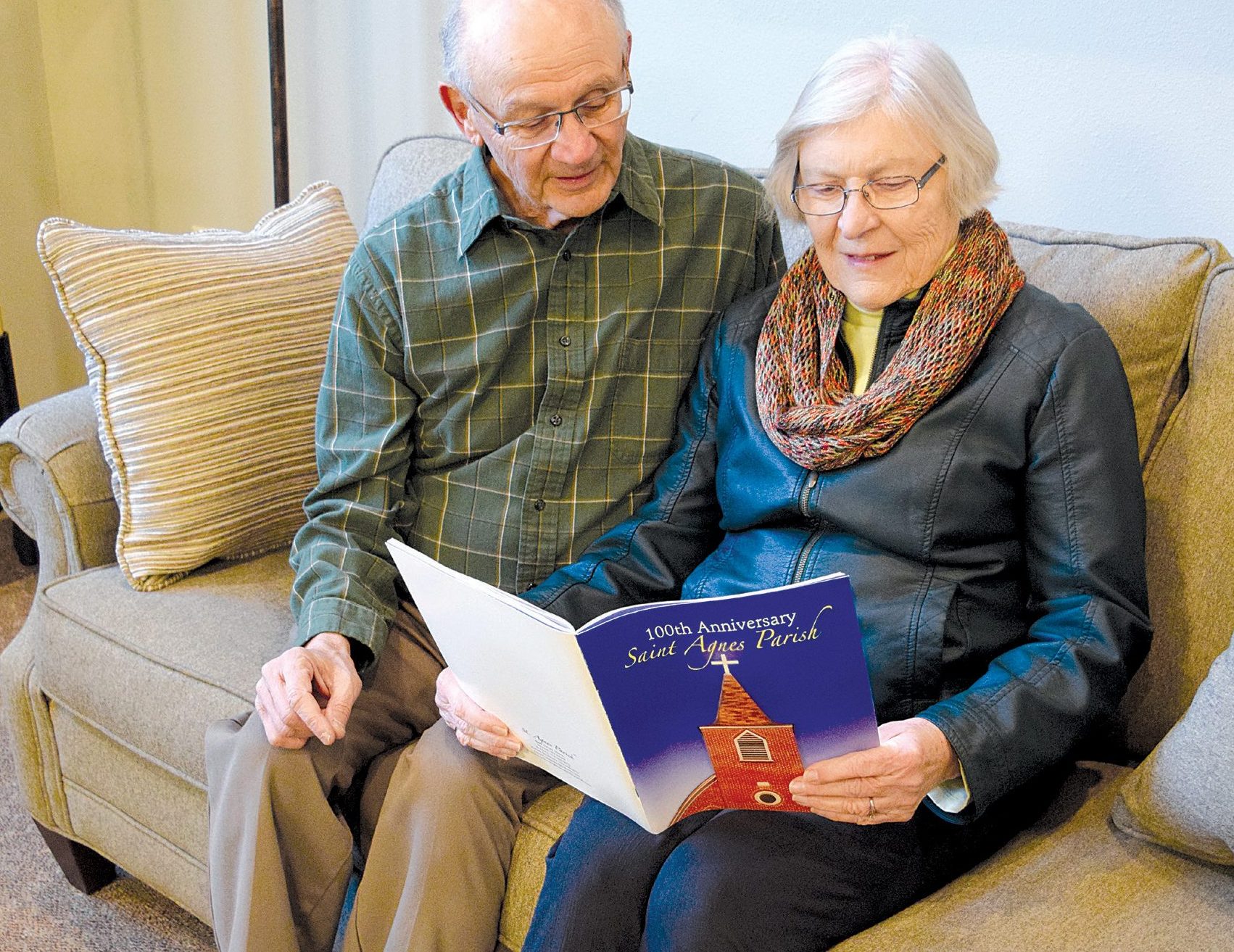 The history of St. Agnes Parish and the Majerle Family’s Chapter 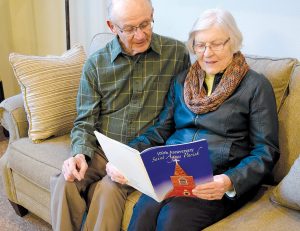 Though they came 70 years after St. Agnes’ founding, the Majerles have worn many hats and served various needs of the parish through the years as they made it their parish home. One of their biggest endeavors was their work on the committee to plan the parish’s 100th anniversary celebration, which occurred in 2010. Paul, Judy and the committee compiled a beautiful book, entitled The History of St. Agnes, an extensive look at the parish founding, its growth, pastors, staff, remodeling efforts, fundraisers, ministries and even personal reflections and stories from parishioners.

In the fall of 1980, Paul and Judy Majerle moved their young family to Weston, Wis., following a new teaching position for Paul. As the Majerles acclimated to a new city, they joined the growing St. Agnes Parish and became written into the pages of its history.

Starting at the beginning, according to The History of St. Agnes, “The deep-seated faith which God has endowed our forebearers caused them to undertake the long trek from Callon [neighborhood in the village of Weston] to Wausau and to Hatley to attend Mass. A system of roads which were mere wagon trails and often nearly impassable, an uncertain train schedule and other difficulties of travel sparked the desire to establish a church in this area so that services could be attended regularly.”

In May 1907, a group of 14 Catholic ladies met to discuss what could be done to establish a parish closer to home. At this historic meeting, the women founded the “Ladies Aid Society,” and chose the name “St. Agnes” for the parish they sought, in honor of their president’s, Mrs. Victory Le Duc, confirmation name. But the ladies didn’t just make plans, they made progress.

“[Mrs. Le Duc] remained the chief buyer and beggar for the Ladies’ Aid Society during the following 10 years. The merchants of Wausau donated sample swatches of yard goods from which the ladies fashioned quilts which were raffled. They held meetings every two weeks throughout this period and conducted a bazaar each spring and fall. A dance in the evening was the climax of these affairs.” The profits from these quilts were the first funds to begin building the church.

In 1910, Mrs. Le Duc wrote a letter to La Crosse Bishop James Schwebach to establish a parish at Callon. Permission was granted and the priest serving St. Florian Parish in Hatley began traveling to Callon monthly to hold services for the group. That year, 22 families were officially enrolled, creating the new St. Agnes congregation.

Frank and Mary Wanta donated two acres of land, onto which the church was to be built. A group of parish men formed an informal building committee in 1913, donating the majority of labor and materials necessary to construct the structure (a practice still very much utilized and valued by the St. Agnes community today).

It should be noted that the St. Agnes community was very resourceful and prudent, using secondhand materials when available and only making purchases using funds that had been saved. They sacrificed luxuries and sometimes even basic necessities, like heat and pews during its first year.

For some of its existence, St. Agnes had been a mission of St. Florian’s in Hatley. Today, the two parishes again share a pastor, Father Greg Bohren.

In 1960, St. Agnes received its first resident pastor. That year, it recorded 75 member families. By 1980, that number grew to 350. So, in 1975, a parish hall was built to accommodate, and Masses began to be held there instead. By 1979, plans were in place to replace the small, aging red brick church from 1913. In June of 1980, construction was complete and the parishioners once again had worship space in a church.

It was only months later that Paul and Judy joined St. Agnes, stepping into the second chapter of its history.

Looking back, Paul grew up in Sheboygan and attended a Catholic school, where “the priests were influential in promoting the priesthood as a calling,” he recalls. So, after eighth grade, he enrolled in St. Francis Seminary, where, in eight years, he completed his high school and college courses. He decided that the priesthood was not for him and completed his studies to become an English teacher. Judy grew up in Waukesha in an active Presbyterian family.

Paul and Judy met as new teachers at Goodrich High School in Fond du Lac in 1965. During their engagement, Judy entered the Catholic Church, recognizing the importance of worshipping together as a family. Judy fondly remembers the seminary choir singing at their wedding ceremony. Paul had asked a newly ordained seminary classmate of his to officiate at the ceremony, to which he agreed.

“He was nervous,” Paul recalls, chuckling. “And we were nervous. We were also nervous that Judy’s family — most of them Presbyterians — might not come to our Catholic wedding. But they came through beautifully.”

The couple have three daughters: LeeAnn, Lisa and Cindy. Paul’s changing teaching jobs moved the family around the state, finally settling them in Weston in 1980 when Paul was hired as a reading specialist at DC Everest High School, where he remained until his retirement.

LeeAnn Majerle took up serving at the new parish. Paul joined the choir, and Judy was hired as the first salaried parish secretary after volunteering to assist the priest, Father Braun, during a time of poor health and recuperation, a role she served for about 10 years.

Through the years the Majerles have been quick to sit on committees and get their hands dirty volunteering with fundraisers and projects like the Polish food hut at Log Jam and the Sweet Shoppe. Both serve as Eucharistic ministers, readers and greeters. They are currently on the Family Life Committee which plans parish social activities.

One very memorable day for the Majerle family was Thanksgiving Day 2005, when their daughter Lisa, who was living in Alabama, had her daughter baptized at St. Agnes. Knowing the whole family would be coming together from far and near to celebrate the holiday anyway, Judy asked the priest if it would be possible to hold the baptism during Thanksgiving Day Mass. He agreed and their granddaughter, Natalie, was baptized in a 95-year-old baptismal gown, worn by four generations before her.

In the last 10 years, St. Agnes has done extensive renovations to all buildings on their campus, including the church, parish hall and rectory. Generous pledge drives have projects paid for before they even begin.

In May 1907, a group of 14 Catholic ladies met to discuss the possibility of establishing a parish in Weston. At this historic meeting, the women founded the “Ladies Aid Society.” For the next 10 years, they met every two weeks, fashioning quilts from donated material to raffle at bazaars and save funds for the building of the church. In 1913, St. Agnes Church was constructed with the quilt funds and labor of parish women.

Judy’s college minor was history, so the opportunity to help with the St. Agnes history book was a very interesting project. “I feel it is important to learn and appreciate what those before us have done that have gotten our country, town or parish to the place it is now,” she shares. “It all started with a group of ladies who got together and made quilts they raffled at bazaars to raise funds for a church. These women’s hands and the hands of local men who helped lay the foundation of the old red brick church helped establish St. Agnes.”

As an ode to the parish history, one of the events of the 100th anniversary celebration in 2010 was a quilt raffle during a parish potluck. The quilt was crafted by the women of the parish and all proceeds were donated to Ronald McDonald House and Catholic Charities, in the spirit of outreach that has long been a St. Agnes tradition.

The words penned by the Anniversary Committee to begin The St. Agnes Parish History say it all: “The waves of time washing over a parish community etch a pattern of memories as varied and numerous as the members … Behind us are years of sweat, toil, and progress. We have a proud heritage. With the spirit of sacrifice, charity of work and word by all parishioners, may the future show continued progress in the true light of our tradition here at St. Agnes Parish.”

Story and photography by Amy Eichsteadt