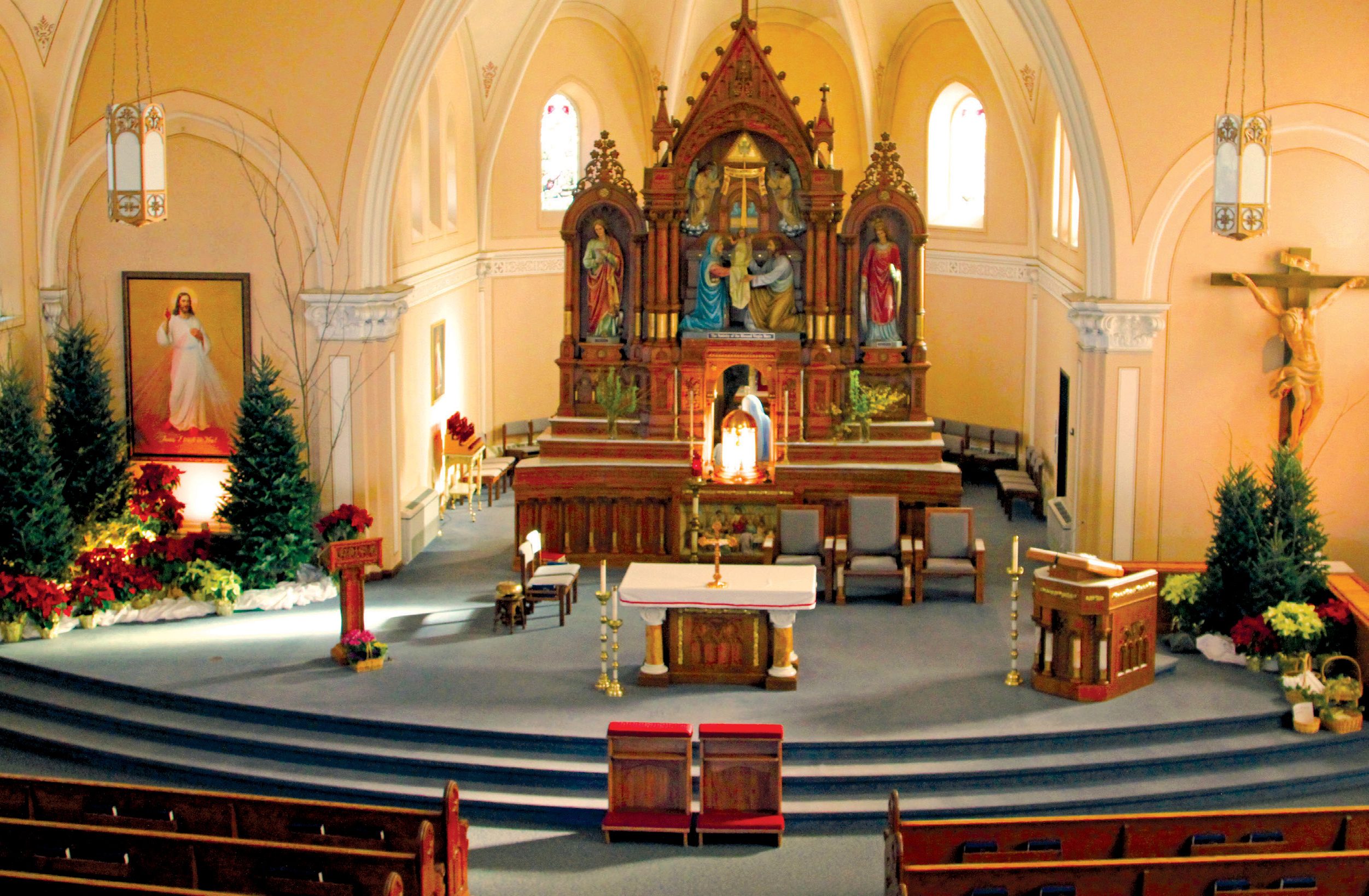 In the heart of Wisconsin resides a treasure. Nestled in the hills of Marathon County are Marathon City and the home of Kathleen (Sis) Hack.  Known as Sis for as long as she can remember, Hack has been a member of the Nativity of the Blessed Virgin Mary Parish her entire life. Born above her parents’ tavern in 1928, Sis has led a faith-filled life from an early age. 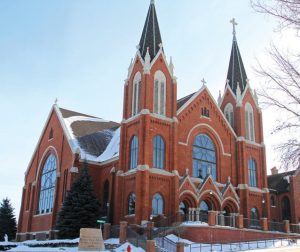 Nativity of the Blessed Virgin Mary Church in Marathon City.

She attended Catholic school and was taught by the Franciscan Sisters of Perpetual Adoration. The school helped form her to the person she is today. She’s a firm believer that Catholic students should attend Catholic school: “Catholic schools can offer so much. They teach you the way to live your life.”

The school she attended was a large building with a huge auditorium and two bowling alleys downstairs. In 1936, the school was destroyed by fire. The fire didn’t extinguish the spirit of the students or the Franciscan sisters. At that time, there were 26-30 students in each grade. While a new school was under construction, classes were held in private homes, City Hall and the convent. Hack holds fond memories of that time: “Everyone respected the nuns. I loved them all.”

Years later, a new school was built and St. Mary’s Catholic School continues to educate students in Marathon. A stained-glass window from the original school remains as a memory and is now part of the church.

Sis stayed in the area after school. Never married, she laughs, “I tell everyone I’m an unclaimed treasure.”

And a treasure she is indeed. From an early age, Sis is an example of someone who lives her faith each and every day by helping others and doing what she loves. 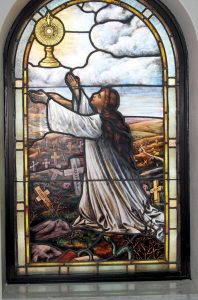 This stained-glass window is from the original Catholic school and was included in the church renovation in 1994. The stained glass is a remaining memory from the school that burned down in 1936 that Sis Hack attended.

When Sis was a small child, her parents moved from the tavern where she was born and bought the local bowling alley. She learned to bowl at an early age. Without a doubt, her passion is bowling. At 89 years, Sis still participates in bowling tournaments. In her prime, she held a high average and has even bowled a few 600 series. She’s traveled to more than 60 state tournaments and countless national tournaments.
“A busload of bowlers would go to the tournaments. That’s how I got to travel and see the country. My motto is, ‘have ball, will travel!’”

Though the weight of the bowling ball she uses now is less than the 16-pound ball she used in her prime, she continues to travel, enjoying the sport and camaraderie of fellow bowlers.

After graduation, Sis helped her parents on the family farm they had moved to when she was 15 years old. “At first, I didn’t care for living on a farm, but then summer came and I loved it!”

But retirement didn’t mean she slowed down. Sis volunteered to be part of the Restoration Committee at the parish. With a major renovation in the works, she played a role in making the church what it is today. Sections of the old church were saved and parts of the old communion rail were incorporated into the ambo and altar. 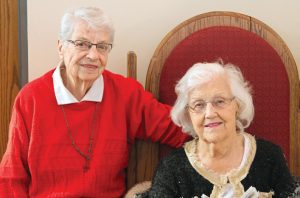 Shown are Sis Hack and Marie Goldbach in the Adoration Chapel of the Nativity of the Blessed Virgin Mary Church. Both ladies have been active members of the parish their entire life. Hack for 89 years and Goldbach for 96 years. (Goldbach quote – “Who wouldn’t be a member here – it’s beautiful!”)

As a lifelong member of the parish choir, remodeling the choir loft and relocating organ pipes to bring to life a beautiful stained-glass window of St. Cecilia, the patron saint of musicians, hold a special place in her heart. “In the end, everyone came together,” Sis exclaims.

Sis wears many hats at the parish. In addition to being one of the two oldest choir members, she is an extraordinary minister of holy Communion and lector, and, along with many other duties, takes holy Communion to the homebound. She can be found at weekday morning Mass, preparing the cruets and ciboria before Mass for the priest. Sis attends daily Mass — unless she’s at a bowling tournament.

After Mass, she takes people to doctor appointments and picks up mail for the elderly who can’t get out. Sis was president of the parish PCCW for four years and also their secretary for a while. She also volunteers at the St Anthony Spirituality Center twice a week, something she’s enjoyed doing since retiring. “It’s just my nature. I’ve always been there to help whoever needs help.”

Sis cherishes fond memories of her life. When she and her girlfriend were students, the Catholic school held devotions where the kids would pray for deceased people. The devotion included praying six each of the Our Father, Hail Mary and Glory Be.

“We had to go out and come back into the church when we prayed for someone else. We made 100 visits one day going in and out of the church. One lady asked us if we were praying for her. We told her we can’t — because you’re not dead yet!”

Sis doesn’t do much with the parish school now. But, in the past she read with the classes and sometimes helped teach arithmetic. She fondly recalls how, once a week, the lower grades attended Mass. “After Communion, the little kids would sit with older people. It was a nice way to get acquainted,” she says.

Sis is in good company when it comes to lifelong members of the parish. Marie Goldbach has been part of the parish since 1921. She met her husband, Ray, and they raised their family in Marathon. Ray passed away several years ago, but Marie continues to carry on their desire as a couple to help the Catholic Church however possible. Marie was the driving force behind the construction of the Adoration Chapel and worked with Sis to include the chapel in the church renovation plans.

“Who wouldn’t be a member here — it’s beautiful,” exclaims Marie.

Sis sums up her life and her faith — a life we can all learn from. “I’m a firm believer in the Catholic Church. I’ve always been kind to people. I’ve always loved my catholic faith. You go along with the changes. Sometimes you don’t like them, but in the end, everything is OK.”