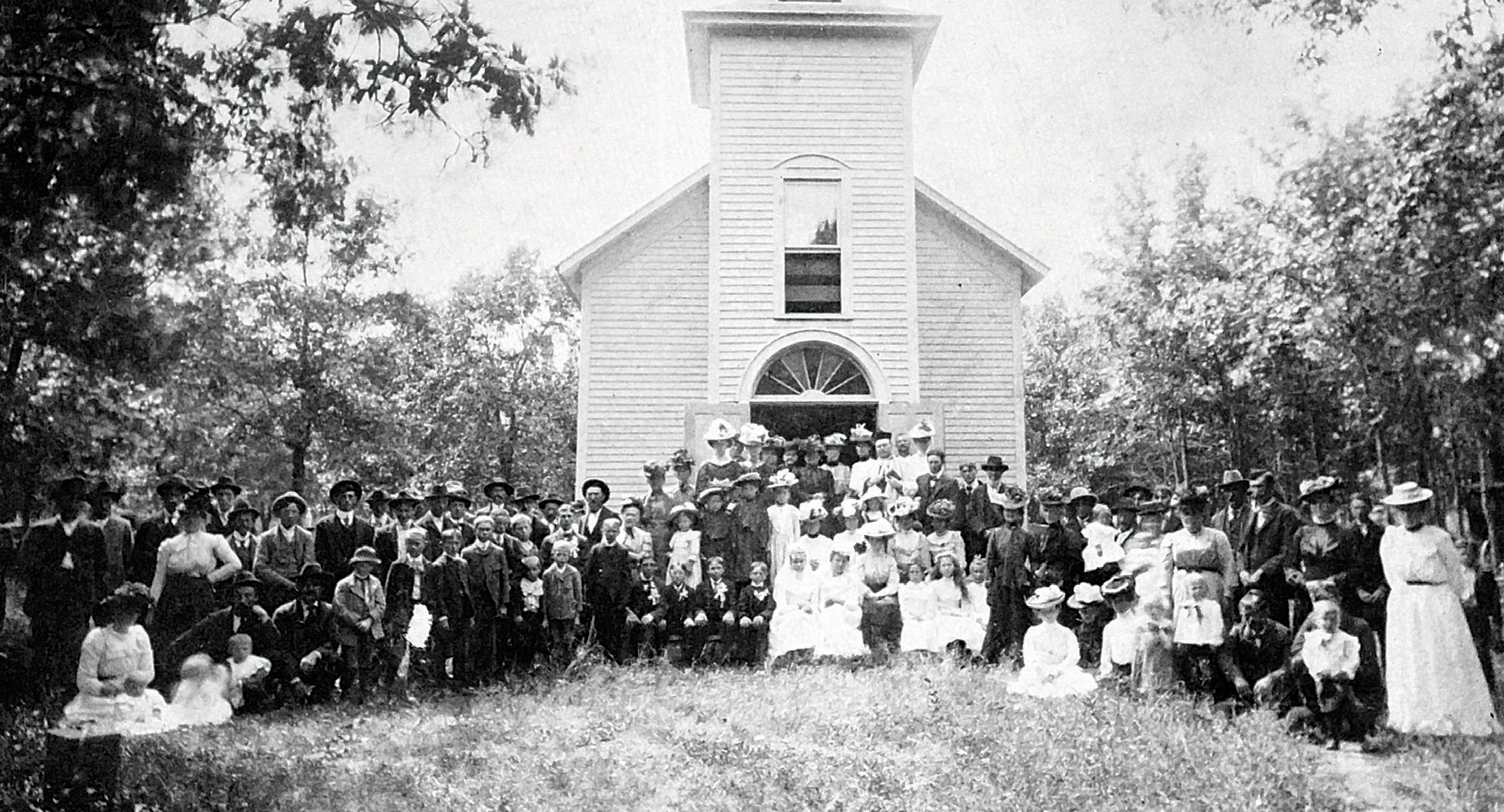 The first church and founding parish community members circa 1888. The church was built by early families shown here. The men donated material and labor.

Remembering the faith and dedication of the early founders of St. Joseph Parish in Elk Mound 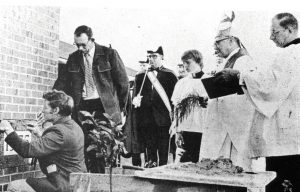 The present church of St. Joseph was dedicated on Nov. 2, 1975, by Bishop Frecking, seventh bishop of the Diocese of La Crosse. Laying the cornerstone is William Bauer, president of the Parish Board, with Joseph Ausman, past president, assisting.

The town of Spring Brook sits in a broad valley, which can be in viewed from Elk Mound, a 1,220-foot mound of earthen material that was deposited as the glaciers of long ago receded. It is in this area, northwest of Eau Claire and halfway to Menomonie, that a number of Catholic families from Ozaukee and Sheboygan counties, of mainly German descent, arrived in the early 1880s. Anticipating a demand for serving the spiritual needs of these early settlers, Bishop C. F. Flasch of La Crosse purchased a parcel of land from Peter Mickelbook for the grand sum of $1. Subsequently, the new congregation adopted St. Joseph as its patron and members pitched in to build a church, which they completed in 1885.

Families of this first congregation include such names as Green, Paquets, Molitor, Schranz, Mickelbook, Schumacher, Simmer, Schaaf, Hanke, Blott and Ackerman, most of whom lived close to the original church. Jerry Feeney, whose family arrived in Elk Mound in February of 1951, “during the worst winter ever” when he was 2 months old, reminisced about some of the founding families: “(T)hey were brothers, Nick and Pete Mickelbook. Pete was Pete Schumacher’s grandfather. Pete and Lucile are the folks … whose family goes back to day one. All the families that go back to day one … I grew up with. Many [of the families] are either no longer in the church or have moved out of the area and [it is sad] to see that part of the history [of the congregation] gone.”

In the beginning, the church was referred to as St. Joseph Mission. The name was changed to the Holy Angels Church of Elk Mound, which it retained from 1889 to 1895, when it was changed once more, to St. Joseph Parish. It remained a mission church until 1959. Priests from Menomonie, Eau Claire and Glenwood City would travel to St. Joseph by rail or horse-drawn carriage.

Joseph and Norma Ausman (front), Jerry Feeney (back, left) and Duane (Dewey) Brunner visit in “Grandma’s House”, the Ausman’s, as they remember the early times of St. Joseph Parish by referring to historical publications at the kitchen table. 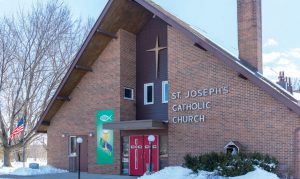 The present church of St. Joseph Community is located at the west end of the village of Elk Mound on Hwy. 12. It was dedicated in 1975 and seats 250 people.

The turn of the century saw the Holy Ghost Fathers of Pennsylvania take over the duties of Holy Ghost Parish in Chippewa Falls and with it the mission church in Elk Mound, St. Joseph. Joe Ausman, whose family belonged to the mission church, remembers his experience as young boy in 1940, “I would walk a couple of miles up to the highway to catch the priest, Father Robel, coming from Holy Ghost and he had a little car, a Studebaker Champion, which was stuffed [full of items] and always two nuns would come out [with him] to teach [at the mission church]. [The nuns] would sit in the back and pray the Rosary as Father sped down the road.”

As time went on, the congregation grew, prompting the need for a bigger church: the original church only had 20 pews. The church was razed, and a new church, which had twice the capacity of the former church, was built in 1915 at the south end of the village of Elk Mound located on Highway H. The site of the first church is now St. Joseph Cemetery. This church served the parish until 1972. A survey of the then 150 families showed that more than 90 percent were in favor of building a new, larger church. Thus, a third church accommodating 250 persons was built on the west end of Elk Mound along U.S. 12. Joe Ausman, past president of the Parish Board, assisted in laying the cornerstone during the dedication of the church on Nov. 2, 1975.

The previous church property was sold, but a beautiful wooden communion rail and some other items were saved by Father Thomas Crowley, pastor at the time, who subsequently gave it to a friend in Eau Claire. Duane (Dewey) Brunner recalls what happened next, “After Father’s friend passed, a lady from Eau Claire called me and said that there was going to be an auction of items at the deceased person’s house. So, we went to the auction to try to get the communion rail back if we could. The church board said if we could get it, we will put it back in our new church some way. At that point, we started to bid on the rail. There were two men who wanted it also to make a tiki bar out of it. We looked at each other and said that was not going to happen. It cost more than we were prepared to pay, but no way it was going with them. We got it and put it in our new church as a railing on the choir loft … where it was meant to be!”

All these accomplishments were possible through the strong sense of community, family and faith in the guiding hand of the Lord, perhaps born out of the congregation’s mission experience. Dewey, in describing his and his family’s long membership in the parish, said, “(E)verything revolved around the family.” Norma Ausman has a plaque hanging on her wall that expresses a similar sentiment, “Grandma’s House, where cousins go to become friends.”

This welcoming community spirit of caring and sharing extends beyond the confines of the parish. Norma described the time “that St. Joseph Parish became home to the United Methodist Church in the village after a storm had destroyed their church in 1980. Father Thomas Crowley, pastor at the time, invited Methodists to hold services and Sunday school classes at St. Joseph Church until their church could be rebuilt.” Remarkable when you consider that not long before, Catholics and Protestants were often at odds with one another. Norma’s secret recipe, “love one another.”

The people, past and present, of St. Joseph Parish remind us through their example that we are all part of a mission—to love God and others through our actions and deeds as Jesus did and still does for us.