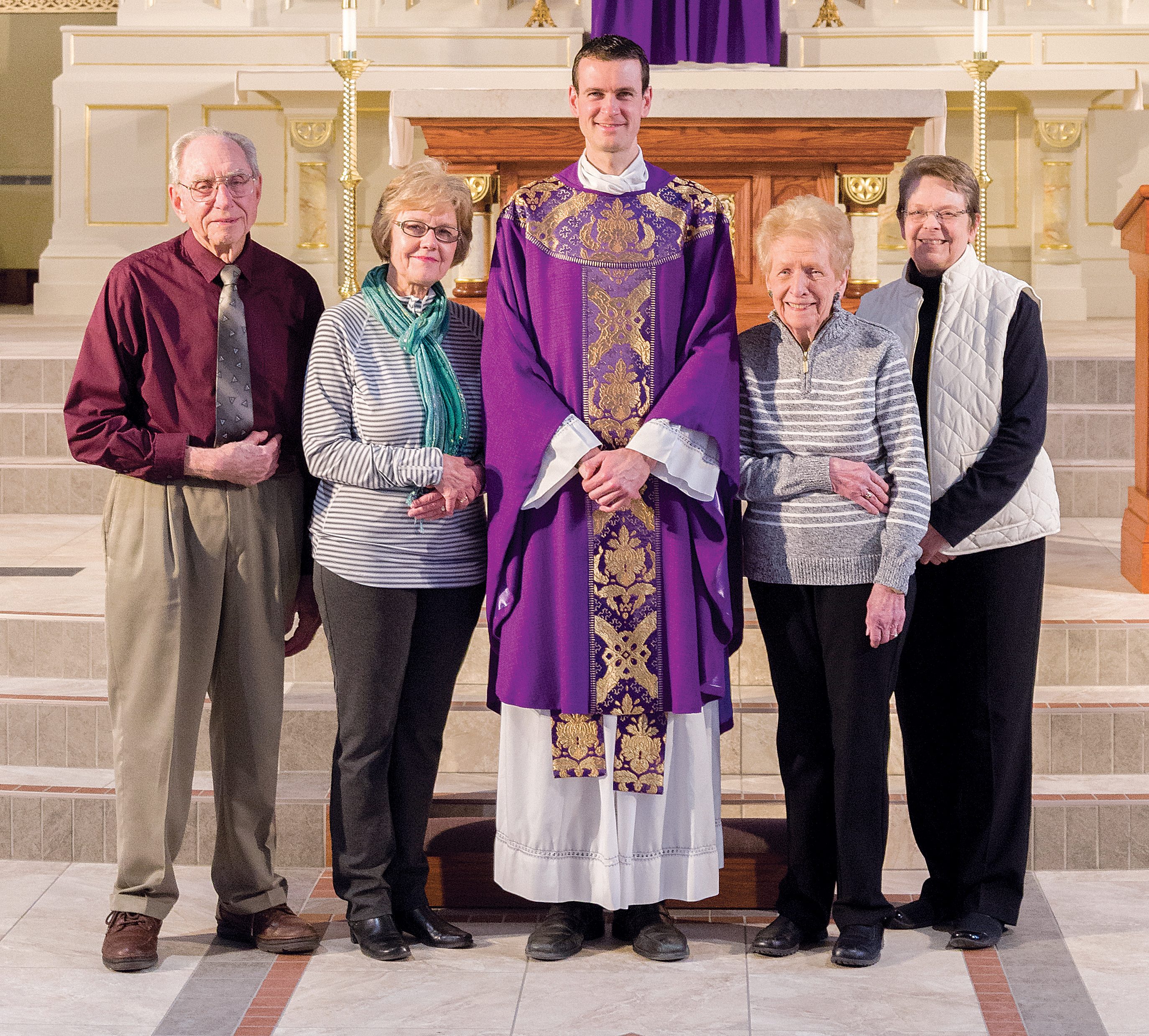 “The church means so much to so many of us,” Susan says. “Notre Dame is a jewel, it’s a beauty.”

The Irish connection to Notre Dame is recognized by a bigger-than-life statue of St. Patrick erected in 1887. Susan’s great-great-grandfather arrived in Chippewa Falls from County Mayo in Ireland in 1856 with his oldest son and family and was a part of the early family of Notre Dame, which included immigrants from France, Scotland, Poland and Germany, as well as Native Americans.

“He settled on a parcel of 130 acres that was a land grant from President Lincoln. They farmed that land,” says Susan. “In 1867, my great-grandfather, widowed, came to Chippewa Falls with his four children and married their nanny in the old St. Mary’s Church. She became my great-grandmother. My connection to Notre Dame is through the maternal side of the family.”

The first church building was a log cabin, 16 feet by 18 feet, built in only two days with a carpenter’s bench serving as the altar. The structure was expanded in 1865 to 30 feet by 90 feet to accommodate the growing number of Catholic families in the area.
“This is where my great-great-grandfather used to worship. He walked three miles to Mass every day and home, winter and summer,” Susan says.

Chippewa Falls was officially incorporated in 1869, and that same year Father C. Francis Xavier Goldsmith arrived and began working to build a new and larger church for his Catholic flock.

The stone for the new church came from the area which is now Irvine Park, donated by William Irvine. Some of the quarry was on the property of Susan’s great-great-grandfather, and she remembers the family story of how it was hauled by oxen cart.

Father Goldsmith directed the building of two other Catholic churches in Chippewa Falls as the Catholic population continued to grow. Notre Dame is referred to as the mother church of the Chippewa Valley.

“Any approach into the city, you see the church,” says Susan.

The campus included a grade school and high school, convent and rectory. Like every parish, the heart of Notre Dame for most families was its Catholic school.

In 1907, Alexander McDonell donated and financed McDonell Catholic High School in memory of his wife and children, replacing Notre Dame High School. The parish had its own elementary school through eighth grade, as did the other two parishes in Chippewa Falls. The Holy Ghost Fathers and Notre Dame Sisters were brought to the parish, with the schools arranged by Father Goldsmith before his death. Many of the oldest families were educated in what was—until the mid-1960s—the grades 1-12 parish school design.

“The east hill of Chippewa Falls was known as Catholic Hill,” Susan says. “Between 7:30 and 7:45 every morning, the doors opened up and kids came out on their way to Mass at Notre Dame. All of life centered around our family, our church and our school. Everybody was family.

The products of these families are still at Notre Dame.”

Susan and her friends grew up wrapped in the love of Christ, with their families all active in the parish. “Feast days, sacraments and seasonal events were very important. They defined our activities and were celebrations,” she says. “Kids all belonged to the celebrations because they went to school. Church dinners were an event. On Aug.﷯ 15, for the f﷯east of the Assumption, we always had, and still have, a parish picnic. It’s an entire weekend featuring food, games, dancing and socializing for all ages. It is all volunteers working together.”

Our Lady of the Falls and Goldsmith Chapel are two unique and special parts of the parish.

Father “Mac” built the shrine, dedicated to Our Lady of Lourdes, that looks over the city. It is built from rock from the creek bed below. Father Mac used the football team and any boys who “got in trouble” to help transport the rock. Both Bernadette and Mary are in the grotto.

The shrine is a spot much loved by many people. At the end of World War II, crowds gathered at the shrine in thanksgiving. Japan surrendered on Aug. 15, the feast of the Assumption! 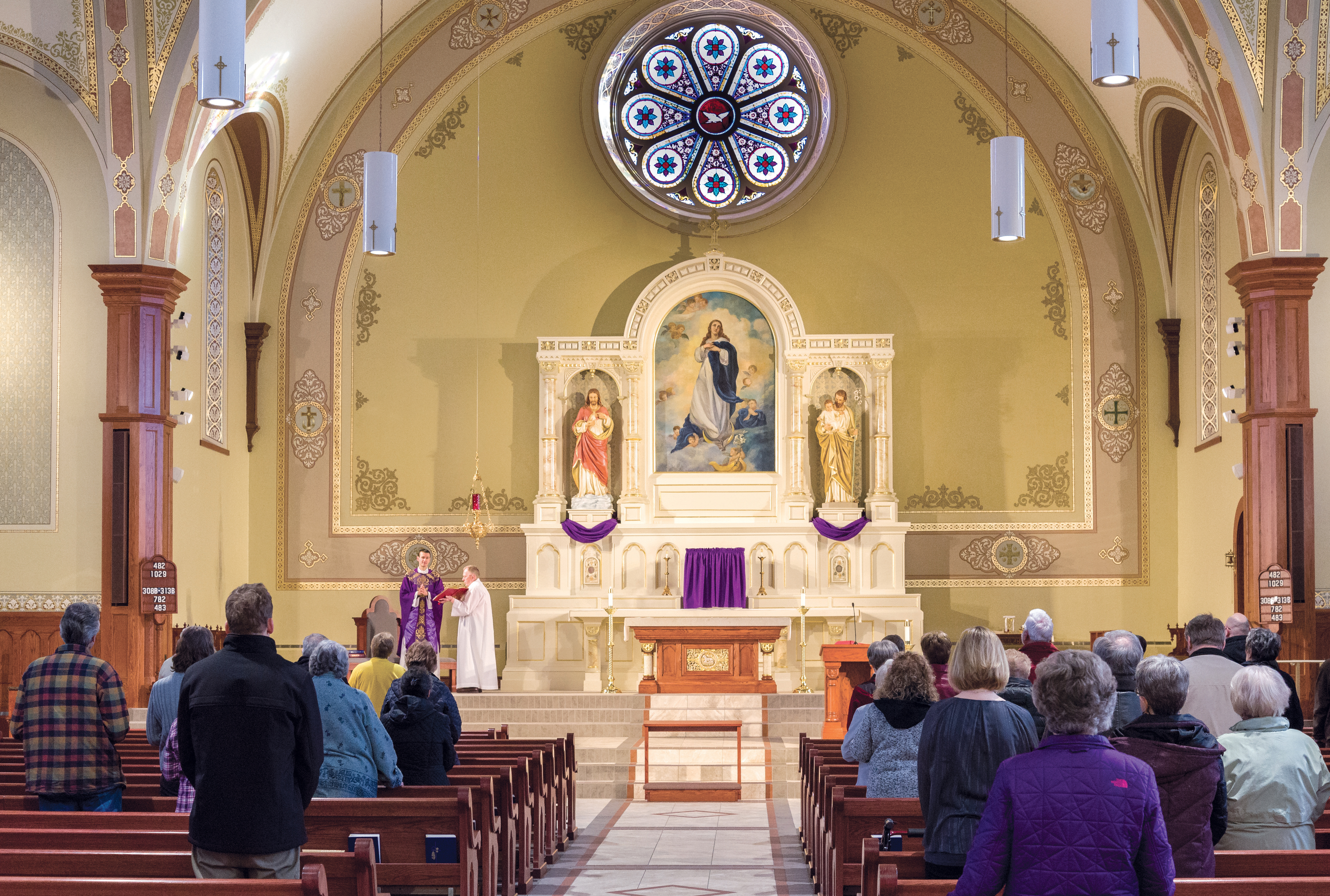 “‘Notre Dame really is the center for a large population still. I think that’s wonderful, Susan says.‘The parish means a lot to us.’”

Like most Catholic parishes, Notre Dame experienced periods of change over the decades, some good and others difficult for parishioners. When Msgr. Mark Pierce arrived in 2011, he was inspired to bring Notre Dame new life. 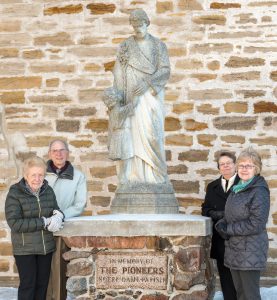 “Msgr. Pierce was only here six years. He assessed the church. The church hadn’t had a coat of paint in 25 years,” Susan says. “He orchestrated the most remarkable c﷯apital c﷯ampaign and a renovation from the ground below to the top of the arches. He organized committees and raised $2 million﷯ in no time. The Notre Dame family responded to him on every level with intense parish pride. Msgr. Mark noted the ‘strong blue collar’ work ethic in the community. People with the gift of working with their hands came out in droves to do the real work of the renovation. In the true and authentic tradition of the pioneers that built the original church, Notre Dame has been returned to its beauty, and is probably solid for at least a couple more hundred years.”

Daily Mass averages about 35 attendees. There are four weekend Masses: Saturday at 4:30 p.m. and Sunday at 8 a.m., 10 a.m. and 7 p.m.
“The inner reconstruction of the church put the choir loft back to its original space and, under the direction of our choir director, the wonderful acoustics of the space have returned,” says Susan. “I came out of Mass one Sunday morning, and some people were behind me that were visitors who said, ‘I’m so glad we woke up too late to go to 9 a.m. Mass somewhere else.’”

For Susan and her peers, it is a blessing to see so many families who continue to be part of their vibrant parish. In Susan’s family, her cousin and their children are the seventh generation of the family in Notre Dame. It is much the same for other pioneer families.

“Notre Dame really is the center for a large population still. I think that’s wonderful, Susan says. “The parish means a lot to us. May the parish continue to add generations of families to its roster.”