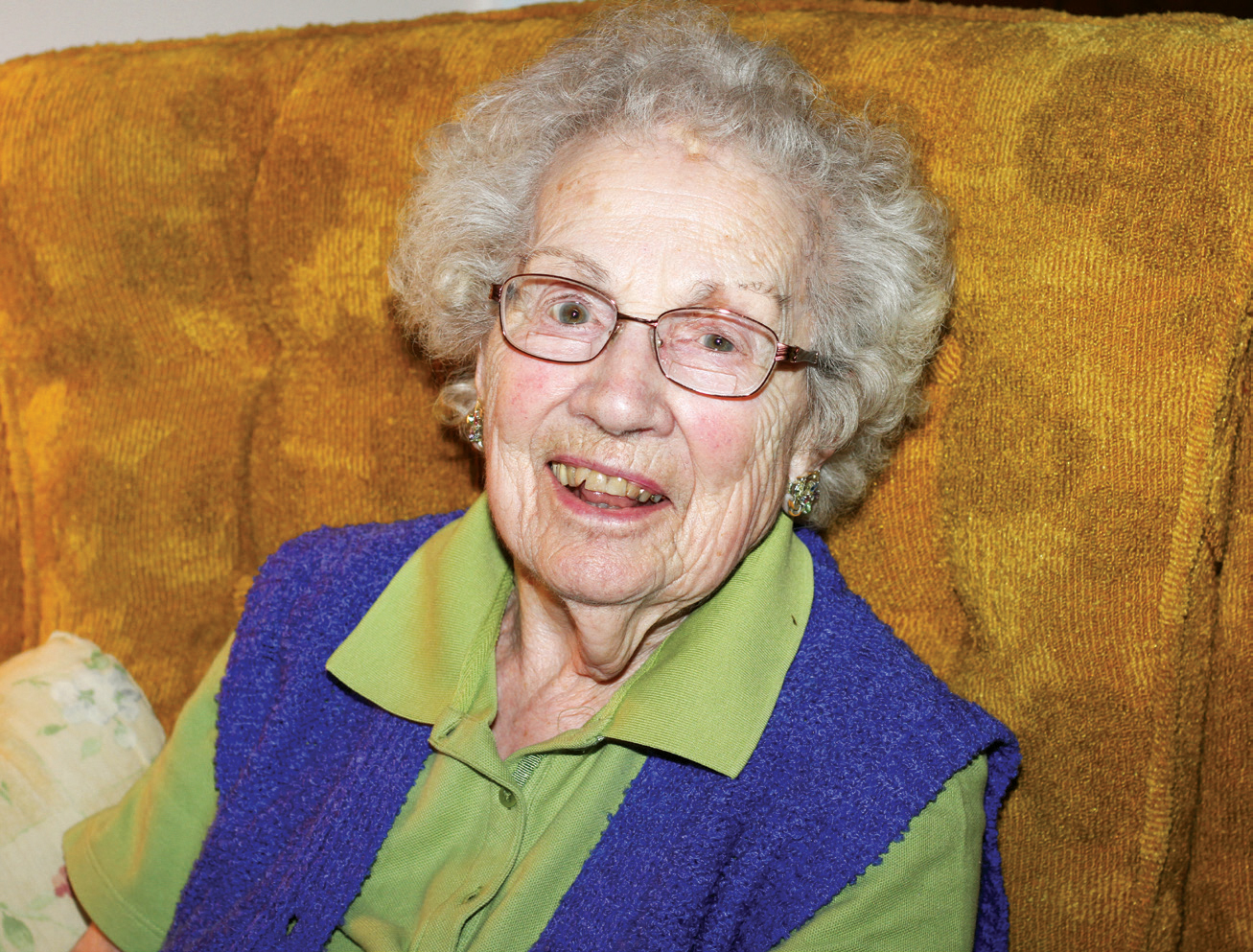 Most every Catholic parish has at least one. Some parishes have several. What is it they are so blessed to have? Elders of the parish—generations who have been members their entire life and from whom we can learn so much. Their struggles and living life with gusto give them wisdom beyond what any top-rated university could ever teach.

Most every Catholic parish has at least one. Some parishes have several. What is it they are so blessed to have? Elders of the parish—generations who have been members their entire life and from whom we can learn so much. Their struggles and living life with gusto give them wisdom beyond what any top-rated university could ever teach.

St. Paul Catholic Parish in Bloomer is blessed to have Cecilia Paulus. At 93, Paulus has a story we all can learn from: A youth during the Great Depression in a faith-filled family that taught her values. These values she has carried on through the years, as she practices her Catholic faith and lives her life as an inspiration to others.

Born in 1925 to John and Anna Lang, Cecilia was the middle child of three girls. Her parents owned a 61- acre farm within the city limits of Bloomer. Her two sisters, Toni and Rita, helped more with the barn and field work than Cecilia did. Cecilia’s chores consisted of helping her mother in the house. “My mother had me helping in the garden, hanging up laundry (how I hated turning the socks) and ironing,” she recalls.

Cecilia’s mother taught her the value of hard work. Anna would scrub the hardwood floor every Saturday afternoon and put linseed oil on it to keep down the dust. For many years, she traded her chicken’s eggs for staples that would be delivered from the Farmer’s Store once a week. It included a nickel’s worth of candy that Anna divided among her three girls. Canned foods were seldom purchased. Such options came from the cellar of foods she canned all summer.

Anna was baptized in the old wooden St. Paul church in 1888, before the large church was built in the early 1900s. She attended St. Paul Catholic School until the sixth grade and was taught by the Silver Lake Sisters—Franciscan nuns from Manitowoc. At that time, most girls didn’t go on to school and nuns were some of the first educated women. Sister Cunegunda taught embroidery class every Friday afternoon, a skill Anna perfected in later years. The sister liked Anna, for in her memory album are many cards and letters of counsel, written to her by this educated nun. 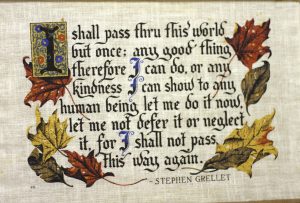 Hanging in Cecilia Paulus’ home is a saying used during the eulogy for her first husband, Arnt Erickson.

Cecilia’s parents taught her compassion for priests and nuns. The sisters would walk out to the farm and, in time, the land across the street from the family farm was made into a golf course. “Sometimes the priests would golf. ﷯When they came around in front of our house, they often lost their golf balls and stopped in to get a piece of homemade pie,” Cecilia chuckles.

Anna loved singing in the church choir and volunteering at church socials. Her love of her faith was carried on to her family. She encouraged her daughters to help out at the rectory in the kitchen. “If you can hear the church bells, then you better get to Mass,” Cecilia recalls was her mother’s motto.

“Her strength and fortitude in keeping all of us going during those difficult years on the farm from 1921 to 1944, through a tornado in 1924, through the years my dad was sick with cancer, make me aware of the person she was. Father John Lemke (St. Paul parish priest) once said to me, “‘Cecilia, the trouble with the Lang girls is that you’re trying to be the woman your mother is, and that’s not possible. You can’t fill her shoes!’ I ultimately agreed she was a valiant lady.”

Cecilia followed in her mother’s footsteps and attended grade school at St. Paul Catholic School. She was taught by the Sisters of Divine Savior, a branch of the Salvatorian family. “Whenever I had free time as a little girl, I became lost in the world of books and loved to spend time in my room reading,” she says. 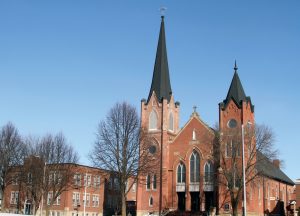 Cecilia graduated from Bloomer High School in 1942. This was the height of World War II and the boys left to help with the war effort. Two days after graduation, Cecilia was hired by People’s State Bank. She worked at the local bank for seven years before eventually meeting her future husband, Arnt Erickson. His family owned the bank in nearby New Auburn. A devout Catholic, Arnt attended St. John’s University in Collegeville, Minn.

Cecilia and Arnt were married in 1949 and became proud parents of two boys and one girl. They passed on their Catholic faith to their family. Cecilia followed her mother’s example and the family continued to foster friendships with various clergy throughout the Diocese of La Crosse and beyond. Arnt was active with the children and held Boy Scout meetings in their basement. He was honored with the Silver Beaver Award, to acknowledge his contribution to Scouting. He loved golfing and taught his family to play well. Sadly, in 1976, cancer took Arnt’s life at age 61—the second man in Cecilia’s life to succumb to the dreadful disease in the prime of his life.

She was fortunate to find another fine gentleman and married Andrew Paulus in 1984. Andrew was raised in Bloomer and attended St. Paul﷯ Catholic School. He was in the same class as Cecilia’s older sister. Andrew was a pilot in the Air Force during WWII. His first wife of 38 years died in 1983. After 14 years of marriage to Cecilia, Andrew passed away in 1998.

Cecilia continued to volunteer at St. Paul Catholic Church and enjoyed working in the shadow of the church steeple. She loves to play cards and hasn’t missed any of the Catholic Women’s Bridge Tournaments held over the past 50 years. Cecilia has also kept busy by volunteering to help with bingo at the local nursing home.

Education, faith and family are what are important to Cecilia. “My church is very important. It helps in all aspects of our life.”

An avid book lover, Cecilia donated a book to St. Paul School, written by Robert Lewis Stevenson and given to her by her mother on her seventh birthday. She sees no reason for age to slow anyone down when it comes to reading and learning. She enjoys biographies and books about Native Americans in the Southwest the best. Cecilia just finished reading a 950-page biography about Ulysses S. Grant.

In 2005, at age 80, Cecilia penned her memoirs, Barefoot All Summer. It’s a story about her life and the people that helped shape her into the woman she is today. She dedicated it to her children, John, Charles and Ellen, who helped make her life complete.

“I was able to sort and collect my memories of the important people in my life, namely my deceased parents, John and Anna Lang, and my husbands, Arnt Erickson and Andrew Paulus,” she says. Included in the acknowledgments is her favorite psalm, “Precious in the eyes of the Lord is the death of His saints.”

“I’ve led a very happy life. Priest friends have been very important to my family,” she explains.“When you’re young you go where you want. When you’re older you go where they lead you. What used to be important isn’t important anymore.”

With trouble walking and giving up her car keys earlier this year, after 20 years of living alone, Cecilia recently moved to Eau Claire to live with her daughter. She plans to remain a member of St. Paul Parish and anticipates her daughter driving her to Sunday Mass.

We can learn so much from the elders of our parish like Cecilia Paulus—if we listen.