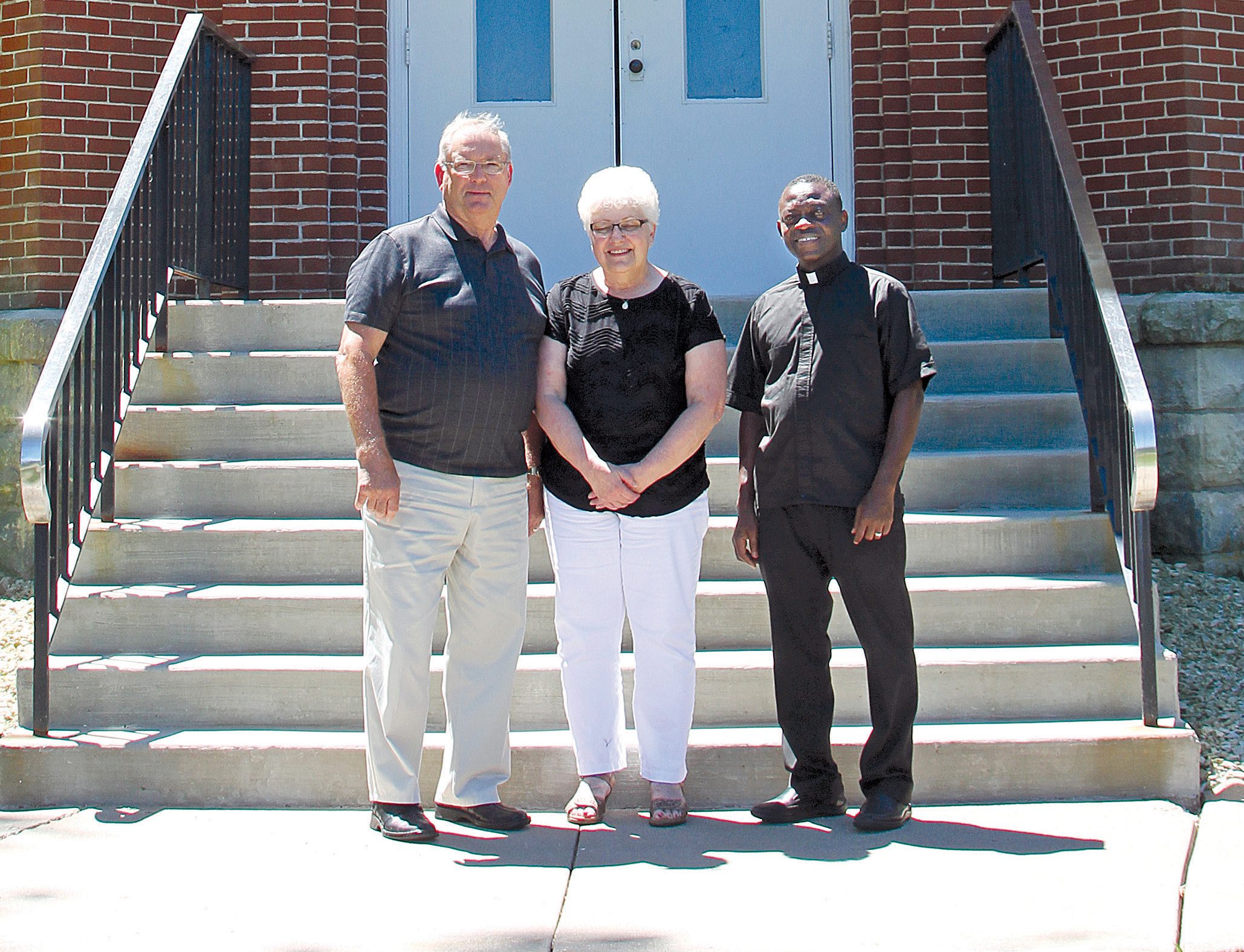 Gary and Dianne Lecheler with their pastor, Father Joseph Okine-Quartey

Many beautiful landscapes are located throughout the Diocese of La Crosse. God’s stunning creation surrounds us and extends far beyond our front door.

The Plum City area is one of those beautiful and serene places. This is where hills and valleys are dotted with family farms — where the hustle and bustle of our hectic world slows down just a bit. It’s also where Gary and Dianne Lecheler call home. 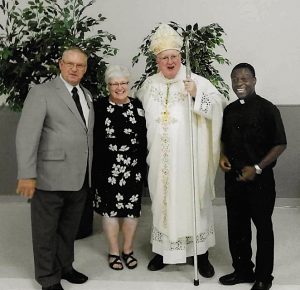 Married 51 years, and parents to three children and eight grandchildren, the Lechelers are active members of St. John the Baptist Parish in Plum City.

A strong history of faith and hard work was passed on to Gary from previous generations. He’s the oldest of six siblings and both his parents came from large Catholic families. Struggling through the Great Depression, Gary’s grandfather started a seed corn business, which was handed down through the family until it was finally sold. The business continues to provide services to area farmers.
Dianne grew up with two siblings, with another lost at birth. Her parents were also raised in large Catholic families and both were teachers. As examples to Dianne and her siblings, they practiced their faith daily.

Gary and Dianne each have an aunt who followed her calling to become a Franciscan Sister of Perpetual Adoration in the Diocese of La Crosse: Sister Innocentia Brunner and Sister Roberta Gilles.

Gary made his livelihood and supported his family by farming for 40 years. Now retired, he and Dianne still own 400 acres of land that they rent out. Gary continues to enjoy the gifts his land provides by tapping 750 maple trees every year. After raising her family, Dianne worked at a bank for several years and now owns her own quilt shop.

Gary and Dianne were meant to be together from a young age. They met in first grade at St. John Catholic School and spent the next eight years as classmates. Gary jokes, “Around eighth grade, two girls sat in front of me. Later on, one moved away and I married the other.”

During that period, there was no tuition for children to attend the parish school. “I wonder if my parents would have been able to send me otherwise,” Dianne exclaims. To support the church and school, every parishioner was assessed a certain amount. “I remember my parents asking, ‘How are we going to do this?’”

During the mid-1950s, there were 25-30 students in each class. They were taught by the Franciscan Sisters of Perpetual Adoration. After many decades of teaching the Catholic faith, the parish school closed in 2006.

In addition to farming and raising a family, it was important for Gary and Dianne to pass on their faith to their children. They cherish memories of attending the farmers Mass each Wednesday evening during the summer. “We would take the kids to the farmers Mass and then have pizza and pop,” Dianne fondly recalls. “Farming was a great way to raise kids.” 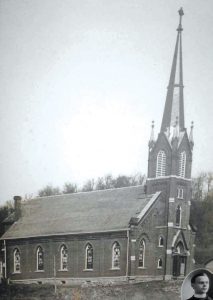 St. John the Baptist Catholic Church in the early 1900s.

They also loved fishing together as a family. “If you instill good values, they will carry them on,” Gary remarks. “Religion is part of our heritage.”

Their example has truly carried on through the generations. The two oldest grandchildren have asked Gary and Dianne to be their Confirmation sponsors.

Parish involvement remains an important part of the Lechelers’ lives. Gary continues to be a daily Mass server and usher. He’s a member of the Buildings and Ground Committee, Karnival Committee and the Knights of Columbus. Throughout the years, he was a member of the Finance Council, groundskeeper, the janitor for the church and school and also cemetery sexton. Gary volunteers however he can. You may often find him at the parish doing whatever needs to be done.

Dianne is a Mass lector, Extraordinary Minister of Holy Communion and a member of the Parish Council, Marriage & Family Life Committee and PCCW. Among many other things, she was a PCCW officer, treasurer of St John Parish and teacher of marriage prep classes.

When Father Joseph Okine-Quartey arrived from Ghana 17 months ago to become pastor of St. John the Baptist Parish, his vestments needed alterations, and he needed them for the coming weekend. “When Father Joseph found out I could sew, he asked for my help,” smiles Dianne. A member of three quilting clubs and owner of a quilting business, she continues to sew for the parish.

“Gary and Dianne have been my angels!” exclaims Father Joseph. “I’m very glad they are here.”

Ordained for 22 years, the support of the parishioners has been a wonderful experience for Father Joseph. “There are many more parishioners who do good and are ready and willing to be helpful.” Because of their outpouring of support, he remarks, “I can sleep at night.”

Passing on teachings and values throughout generations is what makes our Catholic faith what it is today. Involvement in our parish community is a vital part of this process. Gary and Dianne Lecheler are wonderful examples to follow.

Story and Photography By Sharon Sliwka