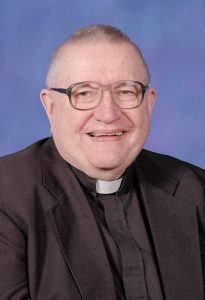 With hope in the Resurrection, we commend to the Lord

Father Thomas J. Smith, at the age of 84 and a priest for 58 years, died Thursday, October 11, 2018, at the Benedictine Manor in La Crosse, Wisconsin. October 11 is also the 56th anniversary of the opening of the Second Vatican Council.

Thomas Smith was born February 5, 1934, in La Crosse, Wisconsin to William R. and Clarice M. (Newman) Smith.  He was baptized at St. Mary’s Church in La Crosse and received his elementary education at St. Mary School and also Holy Trinity School in La Crosse.  He attended Aquinas High School in La Crosse.  His college studies were at Holy Cross Seminary in La Crosse and his theological education was at Mount Saint Bernard Seminary in Dubuque, Iowa.  On May 14, 1960, he was ordained a priest at Christ the King Chapel in Holy Cross Seminary by the Most Reverend John P. Treacy.

Father Smith was an organist since his early seminary days and he played at many diocesan events.  He was dedicated to the Knights of Columbus and served as the Chaplain of councils in Sparta, Colby, Prairie du Chien, Chippewa Falls and the Faithful Friar of the Assembly in La Crosse.  From 1967-1969, Father Smith served as the first Diocesan Chaplain for the Knights of Columbus.  He wrote a column on the Sunday readings for The Times Review and Catholic Times newspapers from 1985-2011.

Father Smith was granted senior priest status on July 1, 2002.  As a senior priest, he lived in La Crosse and played the organ for many events at Holy Cross Diocesan Center; he also remained involved in the Knights of Columbus until 2006.

Father Thomas Smith was preceded in death by his parents, his infant brother Joseph, and his sister Patricia.  He is survived by his brother James, nieces Tamara and Jennifer, and nephew Michael.

The Mass of Christian Burial will be celebrated at Christ the King Chapel in Holy Cross Diocesan Center at 11:00 a.m. Monday, October 22, 2018.  The Most Reverend William Patrick Callahan will be the main celebrant and Reverend Eugene J. Wolf will be the homilist.  Entombment will follow at Catholic Cemetery in La Crosse, Wisconsin.

Visitation will be held at Christ the King Chapel on Monday, October 22 from 10 o’clock until the time of the funeral Mass.

The Diocese of La Crosse and family are being assisted by Blaschke-Schneider Funeral Home in La Crosse.  Memorials may be made to the Shrine of Our Lady of Guadalupe in La Crosse.