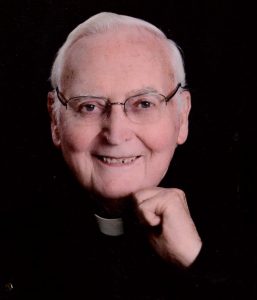 Father Joseph R. Keating, at the age of 90 and a priest for 61 years, died Saturday, September 29, 2018, at the Richland Hospital in Richland Center, Wisconsin.

Joseph Keating was born November 27, 1927, in Boston, Massachusetts to Thomas F. and Anna M. (Ryan) Keating.  He attended Ditson Grade School in Pinehurst, Massachusetts and Howe High School in Billerica, Massachusetts.  He joined the U.S. Navy on July 18, 1945, and served until June 16, 1948.  When he returned to civilian life, he studied at St. Philip Neri School (For Delayed Vocations).  Joseph completed his Bachelors of Arts degree in philosophy at Saint John Seminary in Little Rock, Arkansas in May 1952 and went to Saint John’s Seminary in Collegeville, Minnesota for theology.  On May 18, 1957, he was ordained a priest at Christ the King Chapel in Holy Cross Seminary in La Crosse by the Most Reverend John P. Treacy.

For reasons of health, Father Keating was granted senior priest status on September 1, 1992.  As a senior priest, he lived in Maryland and Pennsylvania, La Crosse, and Richland Center, Wisconsin.

Father Joseph Keating was preceded in death by his parents and his siblings.

The Mass of Christian Burial will be celebrated at Assumption of the Blessed Virgin Mary (St. Mary’s) Parish in Richland Center on Wednesday, October 3, 2018, at 11:00 a.m.  The Most Reverend William Patrick Callahan will be the main celebrant and Reverend Monsignor Roger J. Scheckel will be the homilist.  Burial with military honors will follow in St. Mary’s Catholic Cemetery in Keyesville, Wisconsin.

Visitation will be held at Assumption of the Blessed Virgin Mary Parish in Richland Center on Tuesday, October 2 from 4-7 p.m., with Evening Prayer from the Office of the Dead at 6:00 p.m.  There will also be a visitation at the church from 10 a.m. until the time of the Mass on Wednesday.

The Diocese of La Crosse is being assisted by Clary Memorial Funeral Home in Richland Center.