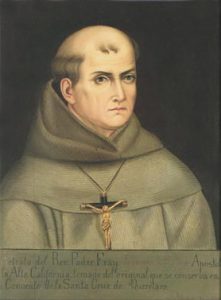 He didn’t wear a Stetson hat, carry a six-shooter, or ride a black stallion. But Saint Junipero Serra was a true hero of the old West. This Franciscan monk, whose feast day is July 1, was responsible for the spread of Christianity throughout California back when the West Coast was still mission territory.

Miguel Jose Serra was born on the island of Majorca in 1713, and took the name Junipero when he entered the Franciscan order in 1730. After his ordination in 1737, he taught theology and philosophy at the University of Padua until 1749, when he traveled to Mexico City to teach in a missionary college there. Once in Mexico, he asked to be assigned to the missions, where he worked among the natives, learning the language of the Pame Indians and translating the catechism into their language.

In 1769, at the age of 56, Serra was appointed superior of a band of 15 Franciscans assigned to the Indian missions of lower California. He began traveling northward, establishing missions and converting the natives as he went. In all, he founded or helped establish 21 missions, including San Diego, San Carlos, San Luis Obispo, San Juan Capistrano, and San Francisco. Throughout his travels, Serra chose to walk from mission to mission, even though his leg was crippled and he suffered from asthma.

When, in 1778, he was given the authority to administer the sacrament of confirmation, he once again visited the missions from San Diego to San Francisco, a distance of 600 miles, to confirm everyone he had baptized – more than 5,300 people. By the time his life’s work was finished, he had traveled approximately 5,500 miles on foot.

Junipero Serra died Aug. 28, 1784, and was buried at the mission of San Carlos Borromeo. One hundred years later the legislature of California passed a resolution making Aug. 29, the centennial of Father Serra’s burial, a legal holiday. Even non-Catholics admired the work performed by Serra, which included introducing agriculture and irrigation systems, urging passage of a system of laws to protect California’s Indians from the abuses of Spanish soldiers, and creating a network of roads.

For more information on the Serra Club and the work they do, go to www.serrainternational.org.

Serra Club
In 1935, a group of Catholic lay people in Seattle chose Fr. Junipero Serra as their patron and the namesake of the group they founded to support and encourage Catholic religious vocations. They admired Serra’s perseverance and his total Faithfulness to doing the work God had chosen for him. Today, there are more than 23,000 Serra Club members in 36 countries, quietly supporting seminarians and encouraging men and women to consider the call to vowed religious life. Saint Pope John Paul II beatified Fr. Junipero Serra on September 25, 1988 and Pope Francis canonized him on September 23, 2015
by ELIZABETH JOHNSON