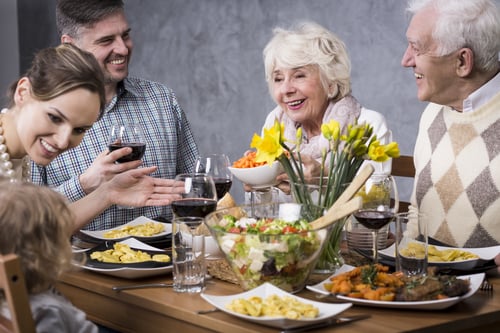 The first thing I noticed about the difference between our two families was how affectionate Steve’s family was. His father kissed me hello the first time he met me! That never happened in my family. You had to be in the family for a number of years before anyone gave you a peck on the cheek. So first impressions were warm and positive.

The dividing process had started. There were many things in my family that Steve wasn’t crazy about either. My very competitive brothers put him off. The way we argued (we would say discussed energetically) bothered him. There were not a lot of things you couldn’t talk about in my family, and the more emphatically you said them the more true they were supposed to be.

Our families had different ways of being Catholic too. Steve’s family was big on devotions. They said the rosary, had holy water fonts by the bedroom doors, attended novenas and made the nine first Fridays. While my family did some of those things, the emphasis was on trying to understand the implications of theological notions. Was there a limit to how much grace a soul could hold? Did sin reduce the capacity of the soul to contain grace? That debating spirit in my family did not stop at the doors of the church!

We didn’t get into arguments about our families for the most part. It was more of an undertone, a lack of understanding, a lack of respect for another way of functioning. Neither of us thought our family was perfect – we were the perfect ones, after all. We were in the process of figuring out the very best way to build a family.

It was kind of a dance. The first steps were approaching one another’s family with openness. We saw the best side of them and presented the best side of us to them. Things that were strange to us in their way of functioning were amusing, not irritating.

The second set of steps allowed us to create a distance between us and the others. We took a critical look and decided to be a family in our own unique way, not like either of the ones we came from. There was clearly a judging component at this stage. If ours was the right way, then it must mean that other ways were lacking. Looking back, I believe some of that distancing was good, in that it helped us become “us.”

Now I think we’re in a third set. We have softened our critical view of one another’s family. We are also more humble about our ability to create perfection in family life. Steve’s family has many gifts I admire and they have contributed to making Steve the man I love, and to our way of dealing with our children. My family also has a richness that makes our life together better than it would have been without them. Our children identify traits that come from each side of the family and are happy to have inherited many of them.

As you look at the families you come from, how do you see them? Do the differences between them make it hard for you to get along with your in-laws? If so, you might want to give yourselves a chance to talk about the differences and see if you can identify some positives in each other’s families that you can use to build a healthy happy relationship.

People don’t have to be perfect to be worthwhile. Even relationships with lumps and bumps in them can be worth having. The character of our two families hasn’t changed over time, but our way of looking at them has. We are kinder, humbler, and probably more realistic now than we were at the first two stages. And by seeing things differently, we have allowed them to have their rightful place in forming us and our family. 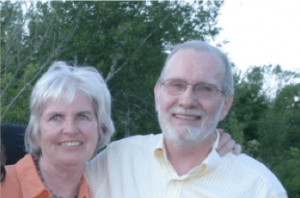 Steve and Kathy Beirne have extensive experience in marriage and family education, catechetics, and marriage ministry. They are the editors and publishers of Foundations Newsletter, FACET premarital resource, and Catholic and Newly Married, an award winning book published by ACTA publications. They live in Portland, Maine, and are the parents of 7 children, grandparents of 5. You can visit their websites, facetsite.com, or foundationsnewsletter.net, or contact them at [email protected]