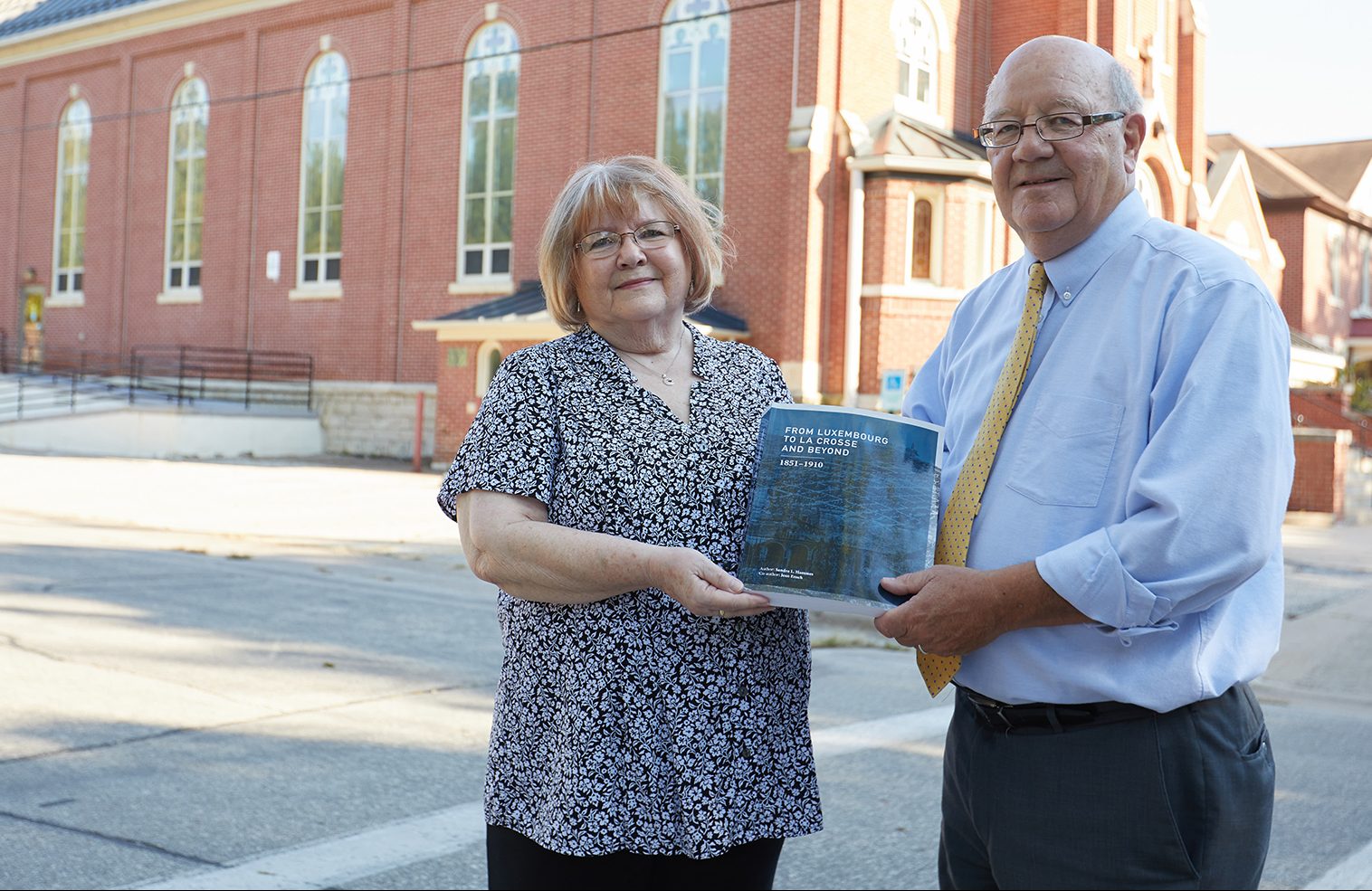 Sandy Hammes and John Medinger both hold Sandy’s book, “From Luxembourg to La Crosse and Beyond” in front of Holy Trinity Church.
Sandy points to Luxembourg on a map in her book.

John and Sandy are fourth generation Medinger’s to attend Holy Trinity Catholic Parish, going back to 1880 when their great-great- grandparents Nicholas and Margaretha (Gehlen) Birnbaum immigrated to La Crosse from Luxembourg. In 1885 their great-grandparents John and Anna (Birnbaum) Medinger followed. Anna was the daughter of Nic and Margaretha. Jim Birnbaum, descendant of Nicholas Birnbaum, and second cousin once removed of John and Sandy, also traces his roots from Luxembourg and tells of his great-grandfather’s contribution to Holy Trinity.

Sandy (Medinger) Hammes explains her deep affection for Holy Trinity Parish. “Now I need a minute to say what this church means to me personally. The first officers elected to the Sick Benevolent Society in 1889 were President John Hammes and Vice-president Nicholas Birnbaum. These men were the great-great-grandfathers of my husband Mike and I. Our families have been involved with this church for almost 130 years. We have seen our share of Baptisms, First Communions, Confirmations, Marriages and deaths. This church is home to all members of my large family, and after I draw my last breath, I plan to go to my lasting home from here.”

After a long stint in public life, John Medinger looked both inward and outward. Inward in asking what is meaningful and important in life. Outward for both John and Sandy (Hammes) and what can be done to heed Pope John XXIII’s call for social justice.

“I realized we must look at a bigger world. Look outside ourselves, see the disadvantaged,” John avowed.

John’s sense of duty and social consciousness has led him to become involved in a Muslim Support Group aptly named Shoulder-to-Shoulder. “It shows our solidarity with our Muslim brothers and sisters,” John said.

John is committed to A Place of Grace Catholic Worker House, dedicated to treating all people with dignity and respect. The Worker House serves 20 to 30 people for lunch and as many as 150 for dinner. Hunger Task Force makes a delivery each week and various groups help cook and serve the Thursday dinners.

John was on the Board of the Jail Ministry and worked with jail chaplains. He works with the Salvation Army, the Retired Senior Volunteer Program (RSVP), and the Franciscan Sisters of Perpetual Adoration (FSPA) committee for social justice. He has been instrumental in helping the Hmong integrate into society in La Crosse. John stated, “Many Hmong have been hired by Viterbo University and St. Rose Convent.”

Jim’s career spans 45 years in employment and labor law. His resume includes a long list of professional associations and civic involvement. Jim serves on the Board of Trustees of Viterbo University and recently became chairman of a newly formed entity, Viterbo Ministries. “Viterbo Ministries was created to preserve and continue the tradition and values of the FSPA’s service at Viterbo University.” The vision demonstrated by Jim’s grandfather can be seen in his grandson’s leadership today.

It was in 1993 when Sandy found out her descendants were Luxembourg immigrants, not German as she was always told. Starting in 2008 she began tracking down people of Luxembourg descent in the La Crosse area. Sandy said, “It was a ten-year project and a labor of love.”

Her recently published book, From Luxembourg to La Crosse and Beyond: 1851-1910, with co-author, Jean Ensch, identifies and documents the immigrants, their descendants, their lives, obituaries and gravesites in their new homeland. Sandy’s book was admitted into the Wisconsin State Historical Society, the Library of Congress and the Luxembourg National Library in 2017. In the 19th-century, most of the 80,000 Luxembourgers immigrated from rural Luxembourg to the Midwest, the majority in the states of Wisconsin, Minnesota, and Iowa. “Roots are very important to people”, Sandy stated. 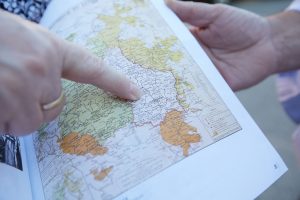 Luxembourg’s Archbishop Fernand Franck was hosted by eight Luxembourg descendants at Holy Trinity Church in 2007. To that end Sandy was one of the descendants instrumental in forming the Luxembourg/American Descendants’ Society of the La Crosse Region in 2008, which now has approximately 100 members. In return, La Crosse Luxembourgers were hosted by Archbishop Franck on their 2010 trip to Luxembourg City.

The ties between the La Crosse Luxembourg immigrants and Holy Trinity Parish go back to its founding on May 10, 1887. The bonds, still symbolized today, are seen in the Annual Season of Giving during the week closest to December 6. Starting with preparation and serving of a meal at the Place of Grace and hosting a party to Celebrate St. Nicholas at a nursing home, the festivities culminate with the annual St. Nicholas Mass followed by a pot-luck dinner and a visit by the jolly St. Nick himself – some say there is a close resemblance to the priest that just celebrated Mass.

When asked about the direction and future of the Catholic Church in the face of the scandals coming out of Pennsylvania, John Medinger said, “The Church will survive this horrible disaster. We know it has overcome other serious problems over the centuries. I think it is imperative that we have hope for the future, I am comforted by the belief that there is a critical mass of good people in the Church.”

By Larry and Ann Scheckel
Photography by Michael Lieurance

“I realized we must look at a bigger world. Look outside ourselves, see the disadvantaged.”
John Medinger