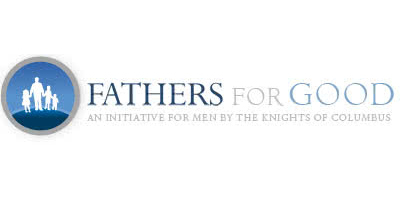 The presence of a loving father in the home directly contributes to child well-being. Likewise, the absence of fathers in our society is linked to several negative consequences like educational failure, poverty, incarceration, and child abuse. According to the National Fatherhood Initiative, the statistics tell a story of the importance of Fathers.

How important are fathers to the well-being of children. A review of the statistics posted at www.fatherhood.org reveal a stark contrast between children who are raised in a home where the father is present and those who are raised without a father.

To combat these statistics and ensure that children receive the loving care as was intended for them at their conception, the Knights of Columbus have a campaign to raise the awareness of the need for fathers in families and provide tools for aiding men to be better parents.

As such, let me encourage you to visit their Fathers for Good initiative. The purpose of Fathers for Good is to broadcast the inherent value of fathers in our families, to society and beyond. Fathers for Good focuses on encouraging fathers to be the men God has called them to be. Below is a synopsis of what that calling should be like:

A Father is … a work in progress. Indeed, a dad’s work is never done – in what he can learn from his family and what he can teach his children, in the sacrifices he can make and the rich rewards he can be given, in the love he can live out and also receive.

A Father is … called by God the Father. This is the vocation that is the foundation of fatherhood. Of course, no earthly father will be like “our Father who art in heaven,” but God does give certain graces to fathers who seek him out and follow his way.

A Father is … an ordinary man who is called and equipped to do extraordinary things from day to day – work, provide, protect, pray, get involved with his family and be there as an example for his children and faithful to his wife.

On their website you can browse a variety of articles and formats from nationally renowned professionals and apologists on both the moral and practical applications for being a more involved father in your child’s life.

We are greatly in need of fathers. This is not an indictment of all fathers, but it does serve as a clarion for witness to others that we know where a father may not be involved much in the lives of their children. So please encourage the men in your life to visit this valuable resource.