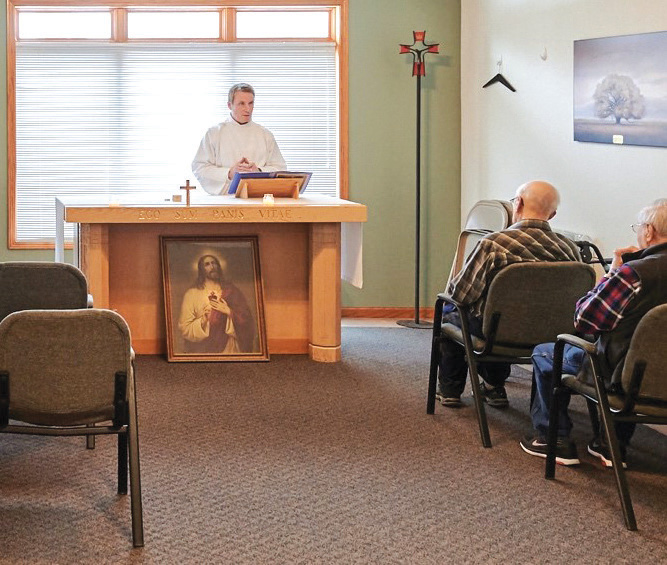 Jon Anderson leads a Communion service with Liturgy of the Word at Arborwood Lodge Assisted Living Center in Wisconsin Rapids.

Jon was born in Wisconsin Rapids to Gene and Garnette Anderson, the youngest of six children, all boys. “My father was an immigrant from Sweden,” Jon said. “Somehow, he made his way to Nekoosa, where he met my mother.” Jon recalls his childhood memories: “I was always with my father. I was his shadow. I learned so much from him. I’m a lot like him. He called me ‘a chip off the old block.'” Jon accompanied his parents to religious services in the Pentecostal church they belonged to. They instilled in Jon a sense of togetherness and the importance of God in his life as a family value. This experience in youth made a lasting impression on Jon.

A good student, Jon went to Mead Elementary School, West Junior High and Lincoln High School. “I loved geometry. My favorite non-academic activity was band. I was first chair cornet by my senior year. I also excelled at football and baseball. I received post-season honors in both sports.” After graduating from high school, Jon attended Milton College in Milton, Wis., a small, private, four-year liberal arts college, where he majored in criminal justice: “I had aspirations of becoming a law enforcement officer or working in probation and parole.” While attending Milton College, Jon also played football: “Football was a great experience for me. I learned to work together with cultural diversity to achieve a common goal.” Jon had a successful career playing defensive back. It was also through playing football at Milton College that he met his wife-to-be, Trisha, who was a cheerleader.

Jon pursued a career in law enforcement. In 1985, he was hired by the Wood County Sheriff’s Department, where he served 31 years. Jon enjoyed the challenges. He took his oath to protect and serve very seriously, and was fully engaged. Along with responsibilities in the patrol division, Jon was on the Special Response Team and worked undercover for the drug unit. He ended his career in the civil process division as a function of patrol. There, he executed civil actions such as evictions, foreclosures and debt collection.

Jon was not a Catholic, but his wife Trisha was, and the children were Baptized Catholic. Inspired by the sense of togetherness as a family on the Lord’s Day, Jon accompanied them to Mass every week as much as his job schedule allowed: “I was content. I did not understand anything more than just the homily. I had friends in the parish. I felt accepted and felt like a family. That was good enough. At least I was going to church. I rarely missed.” God had a plan for Jon that revealed the next step in his life. “My journey of complete surrender [to God] began with a serious motorcycle accident in 2010. I remember clearly my first night in the hospital. After admission I was all alone with my thoughts, waiting for the first opportunity to see my wife. I was wondering what I was going to say to her,” he said. “Staring into the darkness at the back wall of my room, I realized I had a lot to lose. The only thing I could think of at this point was first talk to God. I said, ‘OK, God, I admit I cannot manage my own life. I surrender and give myself to you. I no longer am concerned for what I may lose as a result of this, just as long as I don’t lose you!’ I felt immediate peace, as though someone had placed a warm blanket on me. All fear suddenly disappeared. That was my awakening.” At that moment, Jon knew he was called by Christ and he decided to respond to the call.

“When the Marion Center for Peace opened in Wisconsin Rapids with 24-hour eucharistic adoration, my wife went every Monday and I started going with her,” Jon said. “I did not know the round wafer of bread displayed on the altar was actually the “Real Presence” of Jesus. … His ‘Real Presence’ was affecting me and I didn’t know it. My life was changing.” Jon credits Trisha as a guiding influence on his spiritual life: “What a patient woman. She prayed a lot for me. She has a lot of endurance. She never put pressure on me to be Catholic. She never asked. I went to Mass for 30+ years. I let our children be Baptized and Confirmed Catholic. I watched her example. I watched the people of God at St. Lawrence. One day, I realized, ‘I want what they want.’”

“No one ever asked me to be Catholic, not even my wife. It was my decision, called by Christ.”

Jon continued, “2013 was the Year of Faith. Our parish had a Faith Cross. My wife and I took home the Faith Cross one week, but I had to bring it back on Friday, as we would be out of town Sunday. I was working, in full sheriff uniform, and pulled up to the parish in my squad car. I didn’t know it was a Holy Hour of adoration and confession. I asked a young woman in the back of the church what to do with the cross. She said to put it in the sacristy. I asked what I should do when I get close just before I get there. (I knew I couldn’t just walk past whatever they’re looking at. Nobody does that. I have seen them at Mass. I could not be disrespectful.) She said to genuflect at the altar (I’ve never genuflected before in my life), put it on the counter in the sacristy, come out, genuflect in front once again and you’re done. When I was leaving, I asked her, ‘Did I look Catholic?’ She smiled and heartily exclaimed with a fist pump, “You looked Catholic!” This young woman happened to be the director of religious education.”

“Within a week I urgently expressed to the priest at the end of each Mass I wanted to be Catholic. No one ever asked me to be Catholic, not even my wife. It was my decision, called by Christ.”

On April 19, 2014, Jon entered into full Communion with the Roman Catholic Church after participating in the Rite of Christian Initiation of Adults (RCIA) program. At the Easter Vigil Mass, he was finally able to receive the Real Presence of Jesus into his body: “I held and adored the same Jesus that Mary and Joseph held!” After being confirmed, Jon began trying to fulfill the command of the joyful obligation we have as Catholics to “go” and profess our new life in Christ to the world: “We are called to glorify God by our lives.”

“I love to minister to the elderly, the sick and the dying. Because of their wisdom and longevity in their friendship with God, they end up ministering to me. I receive a blessing. They know God better than I do. I see God in them. They are so thankful and full of love. I also like serving the solemn exposition of the holy Eucharist. I have a special devotion to the Eucharist,” he said.

Jon is currently discerning if God is calling him to the diaconate: “I’m at peace. For now, I’m just following Jesus like the apostles did.”