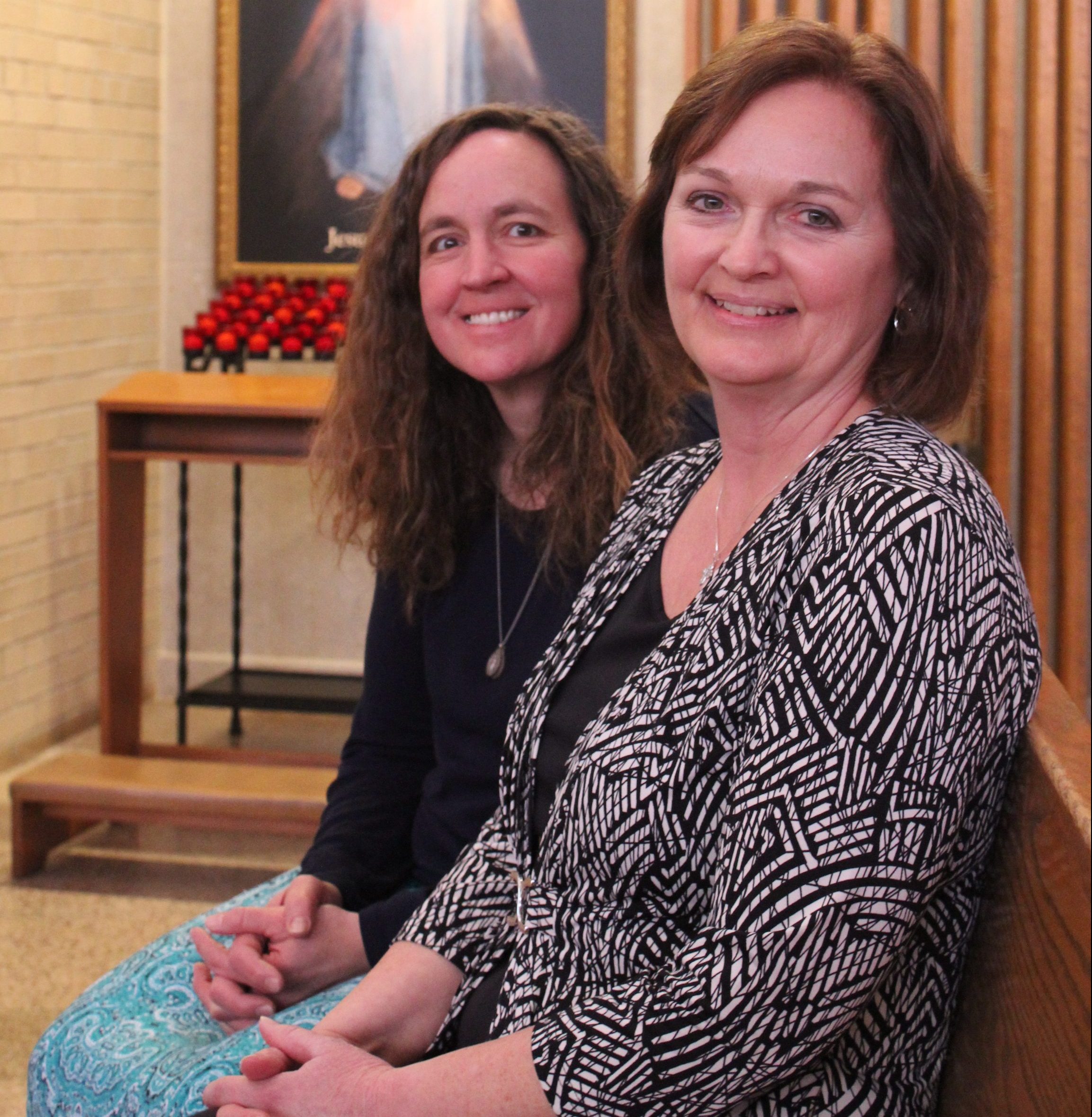 There are many faces behind the Divine Mercy Sunday devotions in the Diocese of La Crosse, and two of this year’s organizers feel a personal connection to the devotion and the saint behind it.

Sue Groetsch, a member of Mary, Mother of the Church Parish in La Crosse, prayed the Divine Mercy Chaplet with her mother when her father was dying 14 years ago. She still has the booklet she bought then, which talks about Divine Mercy and St. Maria Faustina, the poor, Polish maid to whom Jesus appeared and asked to promote this day of grace.

Sue, who was raised Catholic and is half Polish, eventually read St. Faustina’s diary — no small task at 730 pages. Sue even dressed as St. Faustina on All Saints’ Day when she worked as a secretary at Blessed Sacrament School.

“Jesus first appeared to (St. Faustina) on Feb. 22, which is my birthday,” added Sue, whose parish will host a Divine Mercy Sunday devotion for a second time this year.

“It’s unbelievable the amount of people who watched the (Divine Mercy 101) video last year and said they never knew what the Divine Mercy was,” she added.

Amy Capelli of Onalaska also prayed the Divine Mercy Chaplet with her mother when her grandmother was dying. Later, before her grandfather died, he told her he loved being “under these rays” as he lay under a Divine Mercy image.

“Mom prayed it with (Grandma) for many years,” said Amy, a member of St. Patrick Parish in Onalaska.

Intrigue led her to St. Faustina’s diary, which she called a “life-changer.” Especially powerful to her was when Jesus told St. Faustina He thought about her while being persecuted during the Passion — long before her birth.

“You read it and you really need to take time to think about it,” Amy said. “It’s a couple of lines in the morning, and the rest of the day it sits there and grows.”

Divine Mercy Sunday is the Sunday after Easter and the last day of the Divine Mercy Novena. Many will start the novena on Good Friday, which consists of the Divine Mercy Chaplet (a prayer invoking God’s Mercy using rosary beads) and prayers particular for each day. There are indulgences that may be gained by the faithful in connection with the celebration of Divine Mercy Sunday. There is a plenary indulgence available to those who comply with all the conditions established, and a partial indulgence to those who incompletely fulfill the conditions. Born in 1905, St. Faustina said Jesus first appeared to her in 1924 and instructed her to join a convent, which she did. She died in 1938, and was declared a saint in 2000 by Pope St. John Paul II.

Father Elias Mary Mills, rector of the Shrine of Our Lady of Guadalupe in La Crosse, said the purpose of the Divine Mercy Devotion is to “make known to the faithful the greatest attribute of God, which is His Mercy.”

He said its message, as explained by the Marian Fathers, is that God loves us and wants us to recognize His mercy is greater than our sins so we will call upon Him with trust, receive His mercy and let it flow through us to others. Then, all will come to share His joy.

Father Brian Konopa, pastor of Mary, Mother of the Church Parish in La Crosse, has his own connection to Divine Mercy. In 1998, when he entered the priesthood, he chose that image for his ordination prayer card. “I guess I’ve always been drawn to it,” Father Konopa said. “I’ve always believed in the power of the name of Jesus.”

“A relationship with Jesus Christ matters more than anything else,” he added. “Just seeing that simple refrain, ‘Jesus, I trust in you.’”

Father Gregory Michaud, pastor of Sacred Heart Parish in Polonia, speaks about the devotion at his parish, “I think the devotion may have begun here when Pope St. John Paul II came through during his visit when he was still a bishop in Krakow.” The parish has been holding a service since 1998, two years before the canonization of St. Faustina. Each year, nearly 800 people attend.

Msgr. Joseph Diermeier, pastor of Nativity of the Blessed Virgin Mary Parish in Marathon, says each year his congregation studies “something about St. Faustina and her writings. Each year, I change it a little bit. We sing the chaplet with adoration of the Blessed Sacrament and conclude with Benediction.”

Story and photography by Anastasia Penchi

God loves us and wants us to recognize His mercy is greater than our sins so we will call upon Him with trust, receive His mercy and let it flow through us to others. Then, all will come to share His joy.”