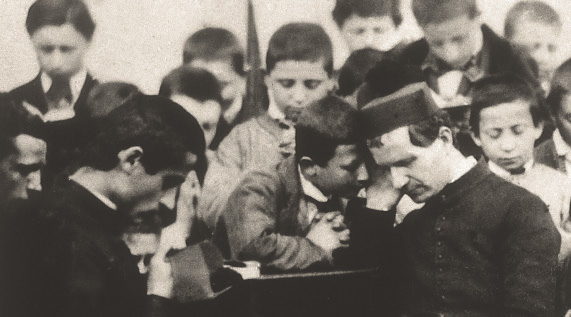 In Turin, Italy, during the 1800s, children were the chief victims of the Industrial Revolution. There were hundreds of boys living on the street without care or supervision. To them, God sent a man with unfaltering Faith, a knack for storytelling, a heart full of laughter and an extraordinary love for children. God sent them St. John Bosco.

John was born in northwest Italy, the son of a peasant farmer. His father died when he was 2 and the family was left in poverty. At an early age, he felt a strong desire to teach others the Faith. The first hint of his vocation came in a dream. He was in the midst of a crowd of children who were swearing and fighting. He tried using his fists to calm the children down. Then Jesus appeared and told him he could help the boys only by being kind, leading them and teaching them to hate sin and love purity.

Without a male role model, John sought out a father-figure who would be a spiritual mentor. He chose St. Francis de Sales, who lived 200 years prior. He had been the bishop of Geneva, Switzerland, during the Protestant Reformation—a time when many Catholics left the Church. Through his diligence, patience and gentleness, St. Francis guided 60,000 fallen away Catholics back to the Faith. Later, he wrote Introduction to the Devout Life, which St. John Bosco read again and again, receiving the needed guidance and formation from this spiritual father.

John was eventually ordained a priest and was known as Don Bosco. One day, when preparing to celebrate Mass, a boy was rudely ejected by the sacristan when he balked at serving for Mass. Overhearing, Don Bosco had the boy brought back, spoke kindly to him and invited him to return the next Sunday with his friends. Nine boys came. Before long, the number rose to more than 100 youths who came for Sunday Mass, instruction and play. The number of boys eventually grew to 800.

Don Bosco developed a “Preventative System” that relied on reasonableness, religion and loving kindness. He guided many young people to Jesus, resulting in young saints such as St. Dominic Savio. In training his teachers, Don Bosco insisted on kindness and familiar presence; spiritually accompanying young people by forming their will and character. The teachers were to earn the student’s trust and give a clear Christian witness of intimacy with God in their own life. He also believed that good music greatly assisted in the growth of young minds, helping to awaken the spiritual part of human nature. Don Bosco was ever-mindful of young people’s need for joy, fun and laughter.

If you are interested in learning more about St. John Bosco’s Preventive System, a sure way to accompany persons of all ages to a deeper commitment to Jesus, please attend the Witnesses for Christ Conference on Friday and Saturday, August 9-10. See the sidebar above for details.

Consider attending the Witnesses for Christ Conference, Friday and Saturday, August 9–10 at Blessed Sacrament Church in La Crosse. Father Lou Mollinelli, a Salesian from St. John Bosco’s order, will present on accompaniment. For further details, the brochure and to register, visit diolc.org/witness.