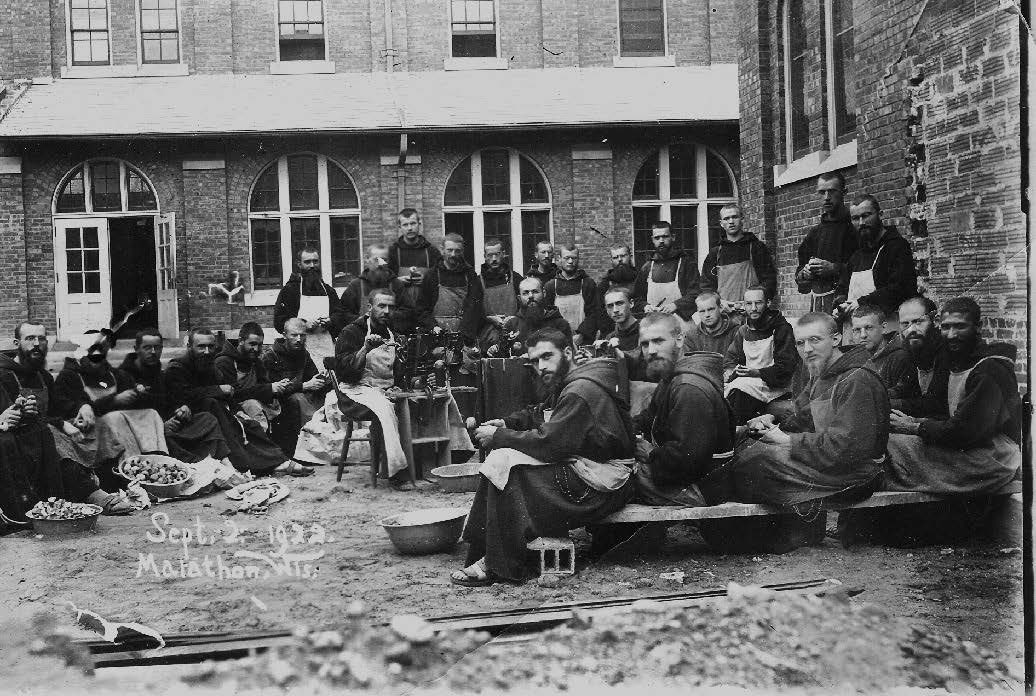 In the summer of 1919, the little community of Marathon City in Marathon County was part of the dedicatory service to open St. Anthony Friary, the new school of theology for the Capuchin Order of Franciscans. It took a lot of planning and preparation to make this happen, but Marathon City, especially St. Mary Parish under the leadership and direction of their pastor Father Winand Daniels, was up to the task.

The Capuchin Order of Franciscans, organized in the United States as the St. Joseph Province, came to Wisconsin in 1856 and built their seminary at St. Francis of Assisi Friary in Milwaukee. As time went by, the leaders soon realized the need to move the seminarians from the perils of urban life in Milwaukee.

One special ministry during this time was the ministry carried out by Father Peter Hesse to recovering alcoholics.”

Forty acres were purchased east of the city along the southern banks of the Rib River. With the cooperation of St. Mary parishioners, the land was cleared and made ready. The friary, designed by Hans T. Liebert of Wausau, was to have three wings with a center courtyard. Dedication of the new building took place on Aug. 15, 1919. The fourth wing on the north side was added in 1923 to accommodate increased enrollment.

After the north wing was added in 1923, the Capuchins continued to make improvements. An altar and grotto were completed in 1929, the Stations of the Cross were built and a swimming pool was added in 1946. The enrollment swelled in the 1950s and 1960s and a need for more space required an addition to be built to the east of the friary.

As the 1960s continued, change was in the air nationally, as well as at St. Anthony Friary. Students were beginning to see Marathon City as distant from the issues of the world. They wanted to have wider opportunities and experiences. A study was completed and the decision was made to close St. Anthony Friary in 1970.

A new era began in 1970 when St. Anthony Friary changed to a retreat center. With the help of volunteers from the community, the Capuchins developed a very vibrant and active retreat ministry. One special ministry during this time was the ministry carried out by Father Peter Hesse to recovering alcoholics. Throughout the years, many Capuchin fathers were involved in maintaining the retreat center. Eventually, Father Dan Crosby and Father Thomas Zelinski would be the last two Capuchins to serve.

With just Father Dan and Father Tom at St Anthony’s, serious questions began to arise about the future of the Capuchin role at St. Anthony’s. The province, after many months of planning and discussions, decided to close St. Anthony’s on Dec. 31, 2013.

With the knowledge that the Capuchins were closing St. Anthony’s, local people who were very fond of the work and ministry being done at that center came to realize that something had to be done to carry on the mission. A group stepped forward to study the possibility of keeping the building and grounds active in the tradition of St. Francis. Through negotiations with the leaders of the province, a settlement was agreed upon and a new corporation was formed to operate and direct the many aspects of St. Anthony’s into the future. With the board of directors, many volunteers and supporters and countless prayers of the faithful, St. Anthony Spirituality Center continues to offer retreats and ministries to those who also hear the call of God, just as those young men did 100 years ago.