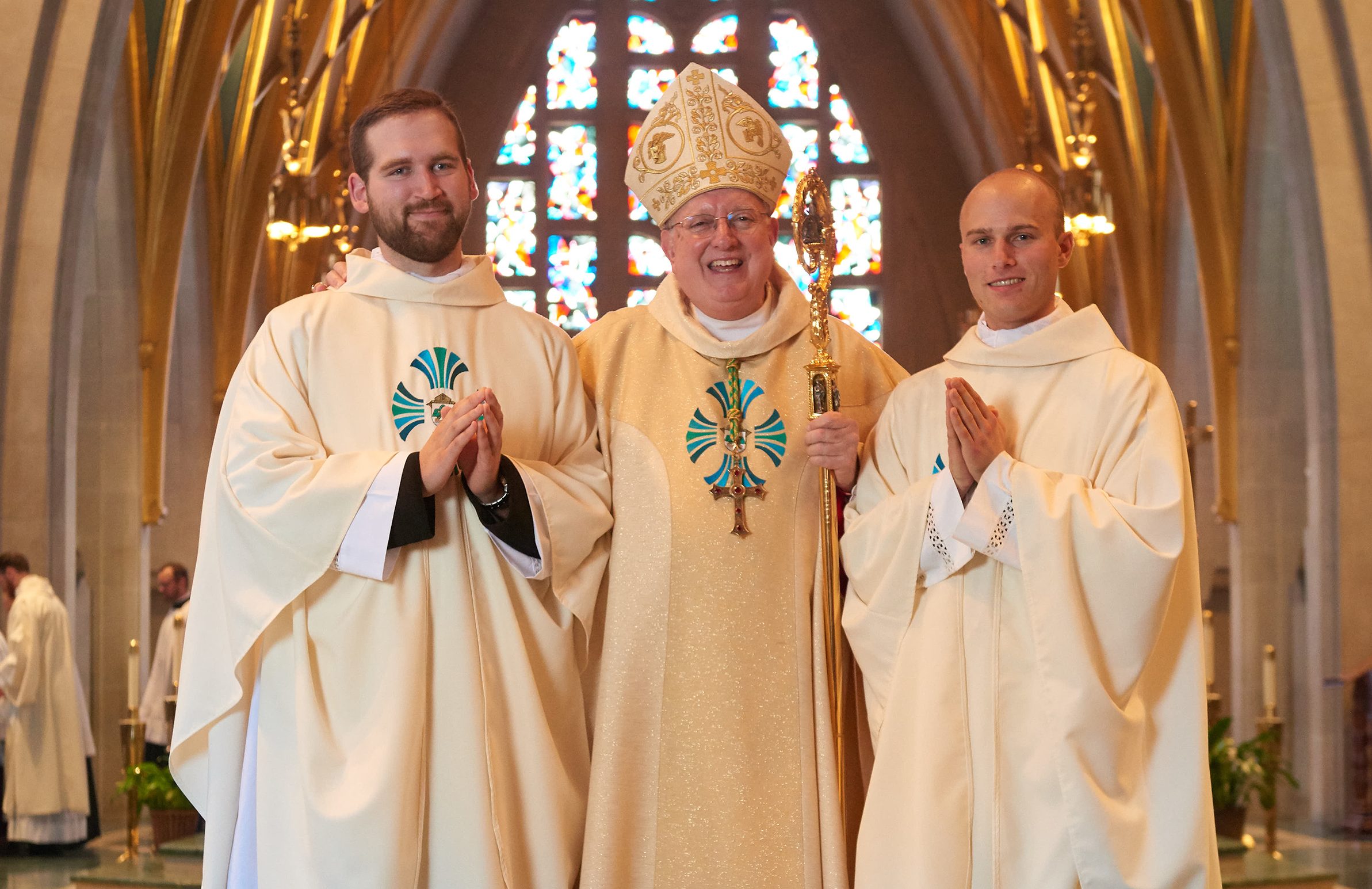 On June 22, 2019, Bishop William Patrick Callahan ordained Deacons Brandon Guenther and Ethan Hokamp to the priesthood of Jesus Christ. Years of discernment and their time as seminarians brought them to the sacrament of holy orders, which was joyfully shared with clergy, their family and friends.

Growing up in Independence, at Ss. Peter and Paul Parish, Father Brandon Guenther remembers being encouraged by teachers and Father Doug Robertson to take his Faith seriously. They—not athletes or movie stars—were his heroes. Their influence guided him to high school seminary, although he did not attend with a specific plan to become a priest.

“I came to the high school seminary my sophomore year,” says Father Guenther. “During the first years, you are not so much thinking about priesthood. I was thinking about being a good Catholic man. I was discerning the priesthood.”

At St. John Vianney College Seminary in St. Paul, Minn., Father Guenther’s loving call by God to the priesthood continued. “It was never a huge bolt of lightning,” he says. “It was a quiet, whispering voice.”

Attending daily Mass made a stronger connection with God’s plan for him. “Daily Mass was, and still is, a huge part of my life,” says Father Guenther.
As he finished at St. John Vianney, Father Guenther knew God wanted him to continue the path to the priesthood and study at a major seminary. His journey took him to the Pontifical North American College in Rome.

“It was really a wonderful opportunity,” Father Guenther says.

Pilgrimages are a way God has called out to Father Guenther. In fifth grade, his first pilgrimage was to the Shrine of Our Lady of Guadalupe in La Crosse.

“It helped me see what a pilgrimage was,” he says of the experience. “Pilgrimages are encouraging to my Faith and strengthening to my call.”

Becoming a priest and fully celebrating the Mass and all its mysteries is very exciting. “To be a part of that will be a very wonderful experience,” says Father Guenther. “I am set apart in the sense that God has called me to make Him present on the altar.”

Father Guenther’s ministry in the priesthood begins in Plover, where he serves as associate pastor for St. Bronislava Parish, and as chaplain at Pacelli Middle School and High School in Stevens Point. He looks forward to the Holy Spirit guiding him into the lives of parishioners and students in whatever way he is most needed.

Building a sacramental bond with the students is important to Father Guenther’s ministry. He hopes his ministry will impact their Faith the way he experienced it when he was a student.

He believes calling the students to prayer will make a difference for them. Many young people don’t have a regular practice of prayer and could use guidance of how, where and when to pray.

Secular culture does not always encourage a practice of Faith, and Father Guenther wants to offer young people the power of Faith. “It’s OK to be Catholic,” he says. “You might feel different, but you’re not. If you don’t know what to do, you can always pray.”

As with any ministry, Father Guenther knows he will face challenges. His goal for himself is not to get discouraged.

“There are so many ways you can become easily discouraged,” says Father Guenther. “People today need hope. I want to share my hope.”

The roots of Father Ethan Hokamp’s Faith began with family. “I’m from Wisconsin Rapids,” says Father Hokamp. “I’m the third of four children—two older brothers and a younger sister. We went through the Catholic school system. We knew from a young age that the Faith was important to my parents and it was instilled deep within us.”

The priesthood was on his mind at a young age. In second grade, when asked to draw a picture of what he wanted to be when he grew up, Father Hokamp drew a picture of a priest.

Father Hokamp followed his brothers’ example of discerning a call to the priesthood, but recognized it wasn’t a career most of his peers considered.

“I really didn’t recognize people outside of my own family wanting to be priests,” Father Hokamp says. “It was difficult for me to talk about it. It wasn’t the popular thing to do.”

In high school, he thought more about marriage and wanted to have a wife and family. At the end of his senior year of high school, Father Hokamp was consecrated to Mary through a 33-day retreat. The consecration had an immediate and far-reaching impact for him.

“It gave me a regular prayer life. It put me in front of God,” Father Hokamp says. “The idea is offering your life to Mary and trusting that whatever happens in your life will bear greater fruit because it is in her possession. I feel like the consecration bore a lot of fruit when I went to Marquette University in Milwaukee the next year.”

In college, Father Hokamp was not sure of what career to follow but considered teaching or mathematics. The year was a mix of positive and negative.

“Something that year didn’t seem right. It didn’t seem what I was supposed to be doing,” he says. “I needed to reach out. Moving away from my family for college helped. It made me choose my Faith for myself. It was very fruitful.”

He began attending daily Mass on campus. “I had never done that before,” says Father Hokamp. “I started going to confession more and recognizing my need for forgiveness.”

With that came his big question to God, “What do you want me to do with my life?” Entering the seminary seemed to stand out as a possibility, especially once Father Hokamp was reassured that if he was called to marriage, he could leave.

Studying at the Pontifical North American College in Rome was a blessing. He appreciates the opportunity to see the worldwide Church in action.
Father Hokamp is very busy as a new priest. He is associate pastor of St. Charles Borromeo Parish in Chippewa Falls and St. Peter Parish in Tilden, plus chaplain at McDonell Middle School and High School in Chippewa Falls.

“I’m excited to get to know families and people from all different walks of life,” Father Hokamp says. “The parishes there are very vibrant.”
He hopes to show the students at the high school and middle school that priests are down-to-earth, and everyone has a calling from God. “I’m not here because of myself,” says Father Hokamp. “God has given me graces. God is working in me.”

Teenagers might not be receptive, but I know they are still paying attention. The challenge is getting them to see that living your Faith is worth it and that God has something in mind for them that is so much better.”

Encouraging people to become an instrument of Faith is important. “Our culture is looking for that,” Father Hokamp says. “There’s a lot more going on with people than what you see or what they are willing to talk to you about. That gives me hope. Teenagers might not be receptive, but I know they are still paying attention. The challenge is getting them to see that living your Faith is worth it and that God has something in mind for them that is so much better. There is something inside of them that wants that—and wants to be told that.”