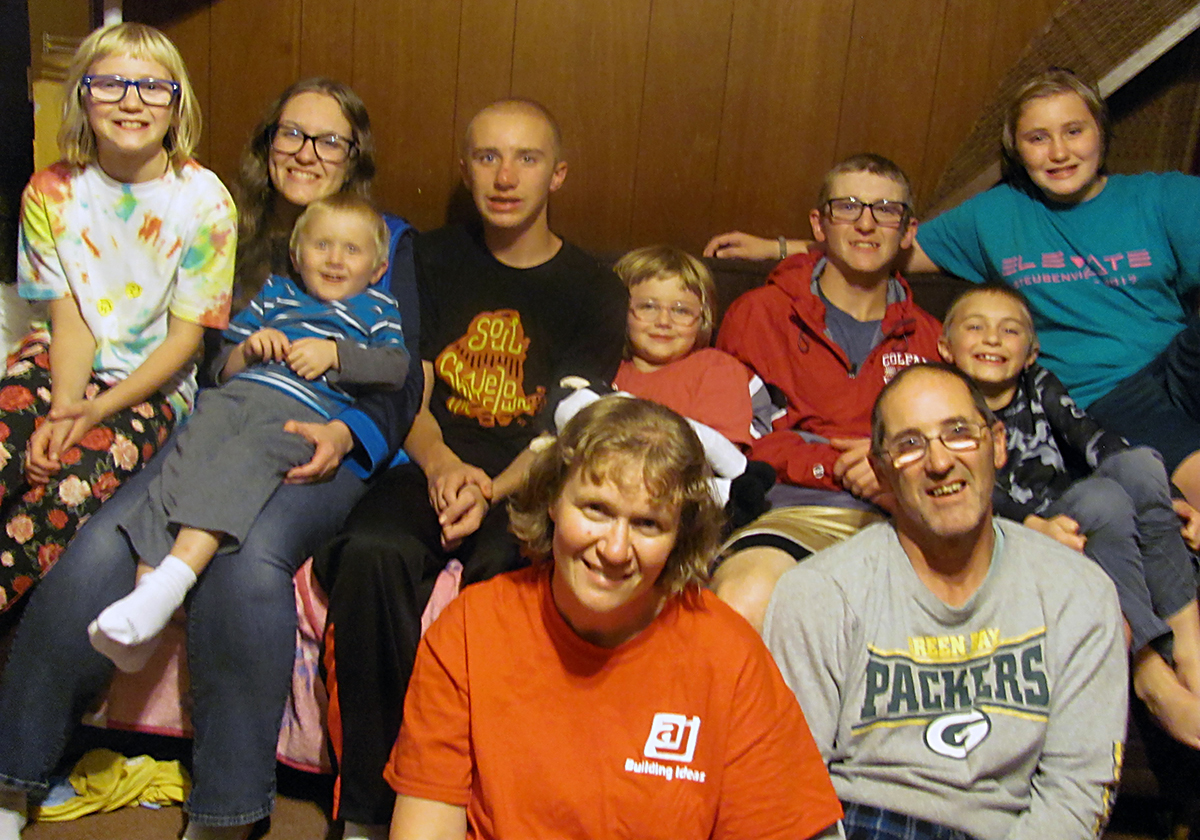 God blesses us with many gifts throughout our lives. A loving marriage, wonderful children and good health are just a few of the gifts most of us pray for. These gifts bring joy, enrichment and fulfillment to our lives. We give thanks to God for granting us blessings such as these.

With these gifts come sacrifices. The trials of marriage and raising a family are not easy. Health issues are difficult to accept. Our Faith in God is tested when we are asked to return the gifts He bestowed upon us.

Louis and Jane Sonnentag of rural Cooks Valley are no strangers to the blessings and sacrifices of marriage. Married 22 years and parents to 10 children, their Faith has been tested many times.

Love is a decision. It’s not a warm and fuzzy feeling.

Jane grew up in the Cooks Valley area, following in the footsteps of previous generations. Her great-great- grandparents settled in the area in the 1880s and joined the newly formed St. John the Baptist Catholic Parish. Jane and Louis continue the tradition as members of the parish, along with Jane’s parents and other relatives.

Louis grew up near Cadott. He and his seven siblings were raised in a strong Catholic family and attended St. Rose of Lima Catholic School. Louis relocated to the Cooks Valley area, taking a job milking cows for a widower.

Louis and Jane met at church and married in 1997, ready to begin their life together. They purchased the farm Louis worked on and settled in to raise a family.

Through the ups and downs of family life, the Sonnentags’ Faith was tested in 2005. Their daughter, Ellie, died at childbirth. A year later, Jane faced life-threatening surgery to remove a five-pound tumor attached to her skull and spine. Doctors weren’t optimistic she’d survive the 19-hour surgery. Beating all odds, Jane survived, but continues to deal with residual side effects. Shortly after this, their son, Mark, was diagnosed with autism.

“I felt like I was on the dung heap. I totally identified with Job,” Jane recalls. “It was one thing after another after another. I was afraid to wake up in the morning.”

Through these sacrifices, their Faith hasn’t diminished—but grown. Instead of dwelling on the bad, the Sonnentags and their children have chosen to accept the challenges and use their experiences to not only draw closer to God, but to help others do the same.

“I knew ahead of time that Ellie wasn’t going to survive childbirth,” Jane comments. “In a society where many medical professions don’t value unborn life, I was told that, ‘if we hurry, we can schedule an abortion.’” Jane’s vehement refusal to have an abortion caused her primary physician to question continuing to care for her. “Doctors shouldn’t assume what they want is what the patient wants.”

This experience helped Jane’s doctor learn to value Christian beliefs. She now institutes those beliefs in her medical practice. “Ellie converted the heart of the doctor when she held my daughter in her hands,” says Jane.

Jane reflects, “If I had no Faith background, I’d have looked at both of those children as being a loss or a waste, or something along those lines. Initially, I tried to rely on myself. I tried to be my own god. God had to teach me children are a gift. They’re not mine. They’re a gift of marriage. I can’t hold onto them like a possession.”

Jane admits, “The greatest things God has done in my life is not what He’s given, but what He’s taken away. When He takes something away, either I was too attached and I didn’t need it, or I needed to change my perspective, or I needed to focus more on Him.”

Jesus’ sacrifice on the cross resonates clearly for Jane and her husband. “My babies’ lives were not wasted. They’re in heaven forever, in everlasting glory because of His sacrifice. No more pain, no dumped boyfriend, no bad grades in school. The ultimate goal as a parent is to get our kids to heaven. God has made it so simple. That’s why God created marriage—to get our kids and spouse to heaven.”

Life can be hectic with eight children. But Louis and Jane wouldn’t have it any other way.

“We don’t have a Better Homes & Gardens, but we have a good enough homes and gardens,” Jane laughs.

“We had one child and then another. I never put a number on it,” Louis comments. “The happiness and joy I feel when I walk through the front door and hear ‘Dad’s home! Dad’s home!’ makes it worth it.”

With their children ranging in age from 19 to 4, Jane and Louis hear comments from people who wish they would have had more children. Jane remarks, “I think that when the kids are little, they’re so needy and every day is crazy. Then suddenly you blink and those years have gone by like nothing.”

Jane believes one of the many benefits of a large family is the built-in life lessons. “You don’t necessarily need to reteach everything” says Jane. “Mainly, every child can’t always come first.”

She tells her kids, “I’d love to dedicate my devotion to you every day, but there are not enough hours in the day. And guess what, there’s a lot of you! You may not get all the attention you want, but that’s OK, because in the world you’re not going to get everyone’s attention. That’s just life. It’s a lesson in humility, a lesson in patience, a lesson in recognizing the needs of your siblings. We have one bathroom. Even something as simple as—it’s not your turn right now. Those simple things are life lessons.”

Having a child with special needs has taught the other children they can’t always come first. Jane reminds her family, “We’re going to have to do things a bit different, but that’s OK. It’s not what we planned. But it works out.” It’s also taught her children compassion.

“Wherever we send our kids, I’d like to think our children are a positive influence on students that have no or little Faith background. We tell our kids there is no reason they can’t pray for their friends or mention God in school. It’s OK to give witness,” Jane remarks.

A large family and married life “isn’t all peaches and cream,” Louis jokes. “But when you put God first and trust in Him, everything falls into place.”

Praying is what keeps Jane going. “I remind myself marriage is a vocation. It’s not puppies and kitties nor cupids and arrows. God called us to this sacrament for a reason. Love is a decision. It’s not a warm and fuzzy feeling.”

She recalls the homily during their wedding about marriage being a sacrifice. “I realized early on that by sacrifice the priest didn’t mean letting your spouse decide where to eat dinner. Sacrifice meant: What am I willing to give up for God?”

Louis and Jane are hopeful they are witnesses to the world concerning the importance of traditional marriage and why it matters in our society. The gifts and sacrifices in their 22 years of marriage can only be understood and accepted by a husband and wife who are committed to their family, each other and to God.

Jane sums it up nicely, “At the end of the day, I’m a wife and I’m a mother. I’m beheld to God for those two things when I stand before Him.”